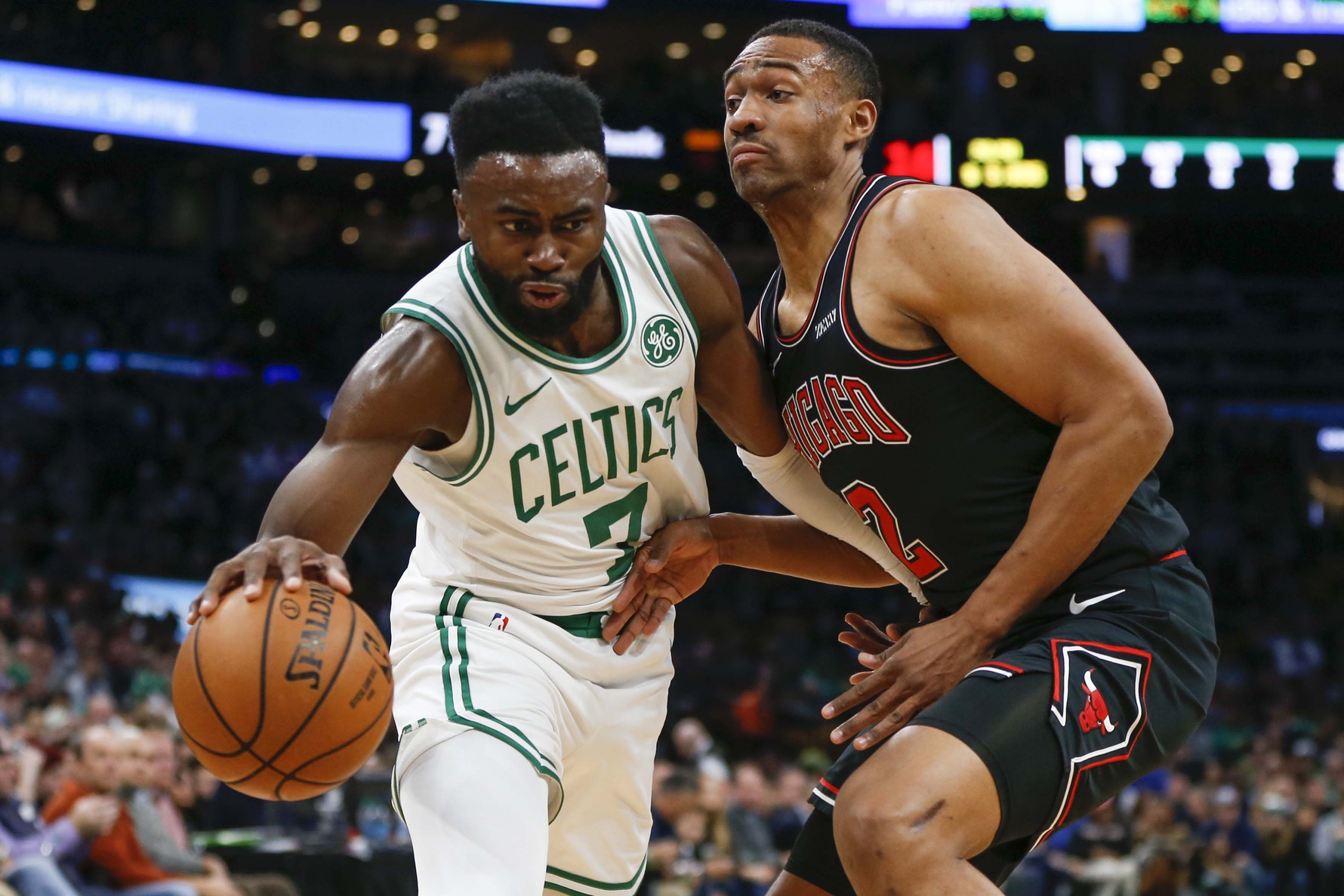 It was a murder scene. I’m surprised it was even allowed on television. The Chicago Bulls are hapless without Lauri Markkannen and Bobby Portis and your Boston Celtics played some quality basketball in three out of the four quarters that were played. Jaylen Brown dunked the ball really hard.

The three-ball was falling in the first half! As an observer, I’ve always felt like the lightly contested shots were easier to hit than the wide open ones, and I think that applies here. The Celtics generated the usual array of shots they like on the wings, but the Bulls, to their credit, show some hustle in closing out on shots. They’re just so late to get there that it’s usually not good enough, which causes just enough urgency to get the shot off without having too much or too little time. That’s my theory, anyway.

The second quarter was the anxious fan’s wet dream. By my rough count, Boston outscored Chicago 32-10 in the frame and took a 51-35 lead into the half. As lopsided as the quarter was, it wasn’t the kind of rip-roaring basketball we’ve been waiting on, but I can’t complain about the good, clean living the Celtics made on both ends. An Al Horford block on one end and a Jaylen Brown three-pointer on the other slowly widened the lead while the Bulls did their best Celtics-playing-on-the-road impression. Chicago missed a ton of open looks early and hardly created any late.

It was allllll Boston the rest of the way. Here’s what matters most: Gordon Hayward hit some shots! He started off shooting something like 0-7 and ended the game 4-12 from the field, 2-3 from the line, and was led the team in plus/minus at +24. They weren’t freebies either; Hayward finished strong on an and-one fast break drive and hit a much-needed corner three ball in the midst of a blowout. I don’t care if it’s the Chicago Bulls on the receiving end of the drubbing, nor would I care it was a pack of caffeinated fifth graders. I’ll accept Hayward’s progress any way he can get it and damn it, they almost lost to Phoenix the other day. This is a fantastic win whether you respect Chicago or not. Don’t sleep on Hayward’s passing, either. He’s as good a playmaker as anybody else on the team.

Jaylen Brown led Boston with 18 points, the majority of which came in the first half. His 8-14 shooting marks his first time shooting above 50% all season. Kyrie Irving casually posted 17 points of his own as well as seven assists, six rebounds, and two steals.

Perhaps the greatest accomplishment of the night was limiting Zach LaVine to 10 points in 32 minutes. LaVine entered the game averaging over 27 per game, and had scored at least 20 in each of the Bulls’ first 14 games.

Gordon Hayward is still finding his footing (pun very much intended). A lob intended for Al Horford ended up among the cameramen and a fast break layup found everything but the rim soon after. (The Celtics went on a quick run to remedy this). Jayson Tatum missed a layup or two of his own in a low scoring first quarter where the Celtics were outscored 25-19. There was certainly an uptick in urgency and off-ball movement, but the Celtics are clearly still uncomfortable taking shots in the opening quarter, as even more layups were passed up in favor of late-clock three-pointers (one of which was shot by Aron Baynes. Gross.)

Tatum is still infected with “dribble the ball way too much and try to shoot a long two” disease, although his symptoms look better. To his benefit, one of his attempted long midrange shots was stripped before he could get the shot off, so we probably won’t complain about it as much.

Terry Rozier was probably delighted to play 29 minutes and knock a couple shots down. He’s still overthinking his offense a bit, although he shook that off later in the game. At one point, he passed up an open three-pointer to try to shimmy, shake, zig, and zag before firing off an awkward, tightly contested midrange shot. It’s not ideal, but it’s looking better.

Robert Williams was assigned to the Maine Red Claws before the game today. I’m only a little bit sad about it.

It won’t be discussed much, but the Celtics still played an ugly first quarter. They trailed by as much as eight and played a few minutes of tentative basketball before getting into any rhythm. They play Toronto on Friday and this slow-start-every-game business isn’t going to fly against them. Perhaps they can ride the momentum from this game to start strong in that one.

With this shot Marcus Smart passed Eddie House for No. 10 on the Celtics all-time 3-point list 👏 (@AAANe_MAnews) #AAANortheast pic.twitter.com/nDGPNkP8Jc