Wild Score Early and Often in 6-2 Victory Over Vancouver 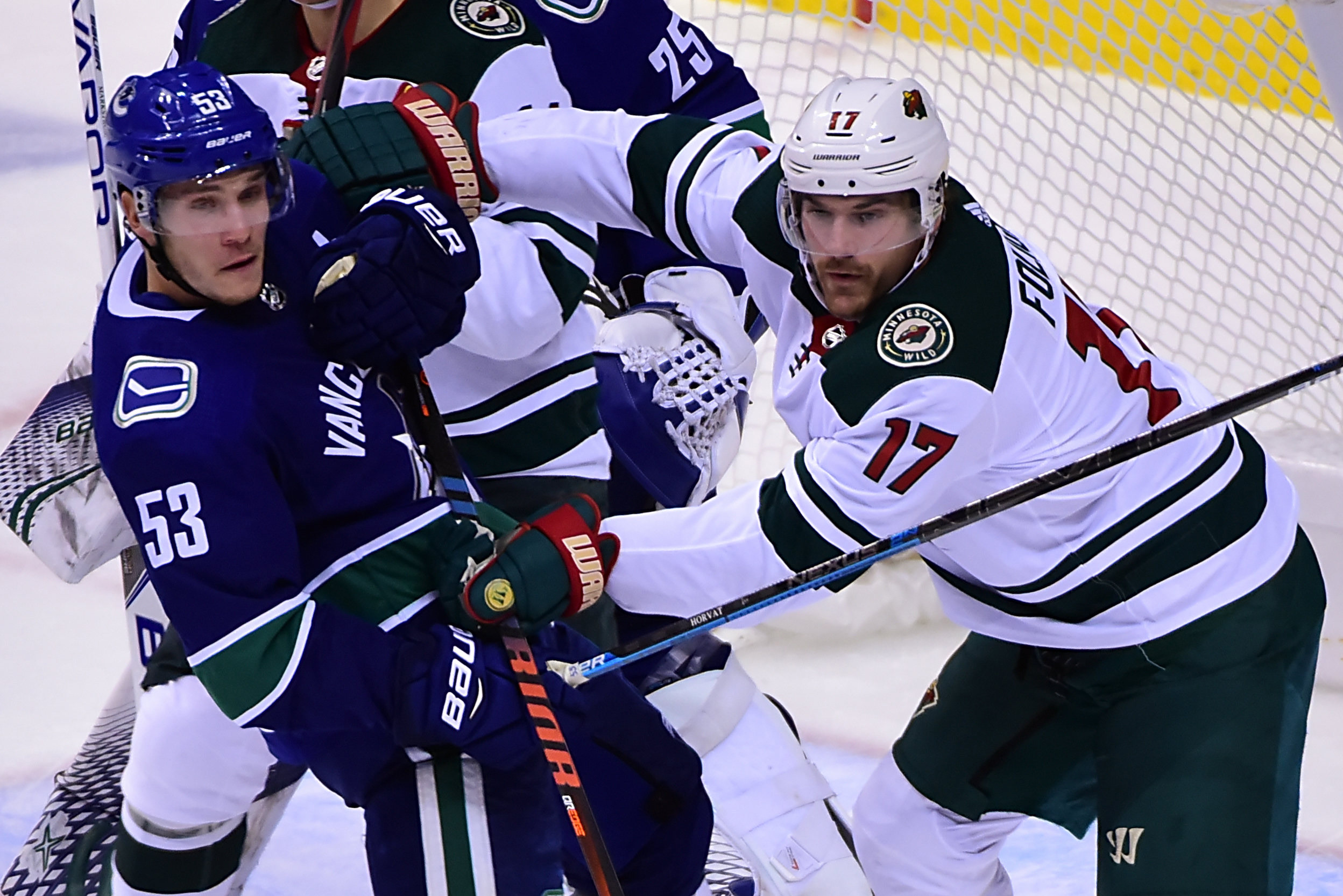 Wild Score Early and Often in 6-2 Victory Over Vancouver

A few days ago we lost a legend, Stan Lee at the age of 95.  He is best known for being the founder of Marvel and creating a number of successful comic book series including the Amazing Spider-Man, The Fantastic Four, The Incredible Hulk just to name a few.  In 2011, Stan Lee worked together with the NHL to turn NHL teams into superheroes called the NHL Guardian Project.  This was his creation for the Minnesota Wild. 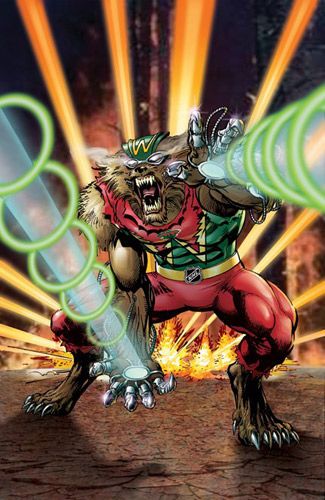 Stan Lee’s creation for the Minnesota Wild, back during an NHL / Marvel Comics NHL Guardian Promotion back in 2011.

At this time, the Wild were still a part of the Northwest Division and a Canucks fan created a video where their lame “Canuck” hero defeats Minnesota’s far more ferocious character.  The Wild are looking to avenge a somewhat ugly loss on Tuesday, not to mention a loss last week in Vancouver.  Can the Wild channel a better effort tonight?

1st Period Thoughts:  The start couldn’t be much better for the Minnesota Wild.  A few minutes into the period, Jonas Brodin would make a flip pass out of the zone that was tracked down by Charlie Coyle in the high slot of the Vancouver end and he’d move in and beat Richard Bachman with a nice forehand to backhand deke.  1-0 Wild.  With the crowd relishing the early lead the Wild would work a puck deep and Bachman left his crease to play the puck.  Minnesota tried to pressure Bachman to move the puck as Antoine Roussel and Matthew Dumba got tangled up near the goal and inexplicably Bachman sent a pass from beneath the goal line towards the middle of the ice that was intercepted by Mikko Koivu.  Koivu wasted little time firing the puck into the empty net after the horrible turnover by Bachman.  2-0 Wild.  Bachman was clearly frustrated as Vancouver Head Coach Travis Green just sort of stared in disbelief at the bone-headed play but remarkably he kept Bachman between the pipes.  Minnesota would have a generate a few more great chances as Bachman continued to fight the puck as he nearly let one trickle through on another Coyle chance, created from another bad own-zone turnover this time by Derrick Pouliot.  The shooting gallery continued for Vancouver as Koivu and Coyle kept peppering Bachman with shots, but he seemed to calm down as more pucks were sent his way.  The Canucks finally started to skate and consecutive Wild penalties gave Vancouver the relief they were seeking as they tried to cut into Minnesota’s lead.  Devan Dubnyk wasn’t tested too much; as Vancouver settled for shots from the perimeter.  In the last few minutes the Wild would go back on the attack.  Coyle looked like he had another golden chance but a quick whistle would prevent him from taking advantage of another bad Canucks turnover.  Moments after that the Wild nearly cashed in as Jason Zucker charged into the slot with a puck to try to set up Eric Staal but his pass was intercepted and corralled by a sprawling Bachman and the period would end with Minnesota holding a 2-goal lead.

2nd Period Thoughts:  Minnesota would draw an early power play in the 2nd period as Ben Hutton tripped up Staal.  The Wild would capitalize on the man advantage as Koivu sent a pass from the wall that was redirected perfectly by Nino Niederreiter.  3-0 Wild.  Vancouver would try to answer back and they came just inches from cutting the lead back to two as Troy Stecher unleashed a laser that rang off the post and out.  Jordan Greenway would get sent to the sin bin after holding Nicolay Goldobin.  Vancouver would cut Minnesota’s lead to two on the power play when Bo Horvat fired a shot that snuck underneath Dubnyk’s arm and in, 3-1 Wild.  Minnesota would answer back about 30 seconds later as Eric Staal looked to feed Zucker in a 2-on-1 but a diving Erik Gudbranson blocked the pass and Staal gathered up the puck and swung around behind the goal to beat Bachman on the wrap around.  4-1 Wild, as Bachman got tangled up by a backchecking Goldobin.  Minnesota kept their foot on the pedal as Matthew Dumba blasted a slap shot that beat a well-screened Bachman, 5-1 Wild.  The Wild would ease up a bit late in the period and the crowd seemed content with their club in firm control of this game.

3rd Period Thoughts:  The 3rd period started off slower as Minnesota felt comfortable defending a 4-goal lead.  A high sticking penalty to Eric Fehr put the Wild a man down but the penalty kill was solid at keeping the Canucks to the perimeter.  Shortly after killing off the penalty, Eric Staal would make a beauty of a saucer pass cross ice to Zucker for a quick shot he blasted by Bachman who could only muster a 100-yard stare in response.  6-1 Wild.  The Canucks would answer back about 30 seconds later as Markus Granlund won a battle for a puck in the slot and he turn and rip a shot by Dubnyk.  6-2 Wild.  The Wild would salt the rest of the game away as they did a fair job limiting the Canucks chances and they’d roll to a victory.

Devan Dubnyk was reasonable, making 25 saves in the victory.  Although he did let up one goal that was pretty soft-ish.  Beyond that, the Wild did a good job at keeping Vancouver to the perimeter.  The Canucks did strike once on the man advantage, but the Wild also killed off 5 Vancouver power plays.

Offensively this game certainly was helped by the large number of gaffes with the puck by the Canucks in their own zone as well as the sub-par goaltending of Richard Bachman.  I kind of felt bad for him, as it was obvious Travis Green wasn’t going to pull him no matter how bad this game got.  The Wild kept pouncing on the turnovers and it seemed like just about anything bad that could happen for Bachman did and often ended up in the back of his net.  I am sure he’s contemplating whether this might be his final NHL game in his career, it was that bad.  Give Minnesota credit for continuing to pepper him with shots and not give Vancouver any breathing room.

This was a good rebound win, even if the Canucks may have conceded this one pretty early.  The Wild took what Vancouver gave them and it was great to see players like Charlie Coyle be assertive in the offensive zone.  Hopefully he continues to play with that kind of fire this weekend which features another back-to-back for the Wild.

Iowa and Milwaukee have always had spirited games, and Wednesday night was no different.  The Wild would break the stalemate as Luke Kunin buried his 4th goal of the season to give Iowa a 1-0 lead going into the 1st intermission.  Iowa continued to outhustle the Admirals and they’d add to their lead as a point shot by Carson Soucy was redirected by Gerry Fitzgerald that evaded Troy Grosenick to make it 2-0 Wild.  In the 3rd period, the game would get more chippy as the Admirals tried to goad Hunter Warner into a fight.  It didn’t work and Iowa stayed focused on its game and they’d find the back of the net again as Carson Soucy worked his way just inside the left faceoff circle and was found with a perfect pass by Mason Shaw for a blast that blew by Grosenick.  3-0 Wild.  Kaapo Kahkonen had 17 saves in the victory.

C – Damien Giroux (Saginaw, OHL) ~ the Spirit’s captain notched the lone goal in Saginaw’s 7-1 loss to Windsor on Sunday.  He then followed up with an assist and went 10-of-16 on his draws in Saginaw’s 4-2 victory over in-state rival Flint on Wednesday night.  Giroux has 8 goals, 17 points, 8 PIM’s and +7 in 19 games.

D – Jacob Golden (London, OHL) ~ the former Harvard commit had two assists in London’s 5-1 win over Kitchener on Sunday, earning 3rd star honors in the process.  Golden has a goal, 4 points, 2 PIM’s and is -2 in 15 games.

C – Connor Dewar (Everett, WHL) ~ the Silvertips’ captain had a big night for Everett as he had a goal, an assist on 9 shots on goal as well as a shootout tally in their 3-2 win over arch-rival Portland on Wednesday night.  Dewar has 16 goals, 28 points, 25 PIM’s and is a +2 in 17 games.