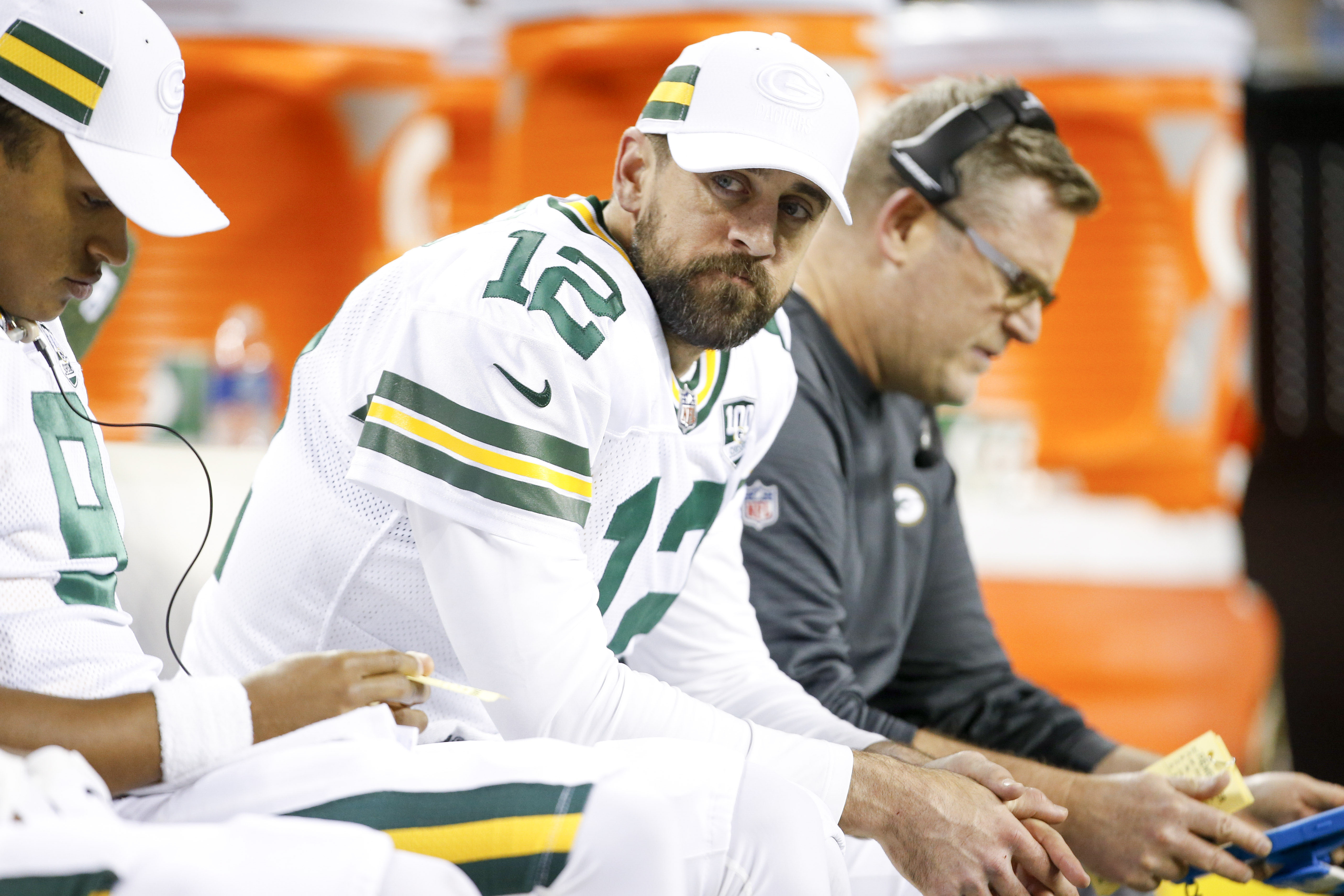 What’s wrong with Aaron Rodgers? If you just look at the stat sheet, it seems like everything is fine with the Green Bay Packers franchise quarterback. He has already surpassed the 3,000-yard mark for the season with six games remaining. He has thrown 19 touchdowns and just one interception and his yards per attempt is a healthy 8.0 while his quarterback rating is 102.2.

But if you’ve watched Rodgers this season, you know something isn’t the same. The future Hall of Famer is leaving a lot of potential plays out on the field. He’s holding the ball too long, missing open receivers with much greater frequency than he ever did in the past and simply does not appear to have the same level of confidence he has usually demonstrated.

What is the cause of Rodgers’ problems? It is likely there are many contributing factors.

The first issue is Rodgers’ health. Sure, the knee brace is off, and the mobility is vastly improved, but the knee injury that Rodgers suffered in Week 1 against the Bears has hurt his play throughout the season.

The most obvious problem initially was a lack of mobility. Rodgers wore a bulky knee brace that hampered his ability to scramble and extend plays, one of the skills that helped make him one of the best quarterbacks ever to play this game.

While Rodgers’ mobility has improved with each passing week, he is still not 100 percent healthy. Psychologically, he also seems to be a bit more tentative when deciding to run with the football. These slight hesitations can be the difference between a positive scramble for a first down and a sack.

The injury also appeared to affect Rodgers’ ability to throw the ball with pinpoint accuracy, especially in the few weeks after it first occurred. The knee is his plant foot and that’s how he aims his throws. This problem has improved significantly, but it clearly hurt his accuracy earlier in the season.

Rodgers also had less confidence in his receivers this year than he has in the past. There has been a lot of turnover at the receiver position this season and it has greatly reduced Rodgers familiarity and comfort with his receivers.

His favorite target, Jordy Nelson, was let go by the Packers during the offseason. He has a new tight end in Jimmy Graham and now Graham is expected to miss time after breaking his thumb against the Seahawks. His other veteran receivers, Randall Cobb and Geronimo Allison, have both missed significant time due to injuries and Allison is out for the rest of the regular season after being placed on IR.

That leaves Rodgers with Davante Adams, who has been outstanding throughout the season, and a group of rookie receivers and backup tight ends. While Marquez Valdes-Scantling, Equanimeous St. Brown and to a lesser extent J’Mon Moore have shown flashes of ability, they are also prone to make rookie mistakes. That means Rodgers can’t always count on them to be on the same page as he is on a scramble drill or to even be in the right spot when running patterns and reacting to coverages.

Rodgers said so after the loss in Seattle, telling reporters, “There weren’t a lot of guys open on third down. We have to get back to getting open on our routes and being in the right space at the right time. Figuring out what those best concepts are for our guys. Without Randall, without Geronimo, we are still learning these young receivers.”

That adjustment was made more difficult by Rodgers’ injury. While he didn’t miss any game time, the Packers franchise quarterback barely practiced for several weeks after he was hurt and had reduced practice time for at least six weeks. Those were valuable opportunities to familiarize himself with his new receivers. Add to it the fact that Rodgers barely played in the preseason and the learning process was slowed down even further.

The lack of practice time also didn’t help Rodgers pick up the changes the team made to the offense in the offseason. Green Bay brought back Joe Philbin as offensive coordinator and the playbook was re-evaluated and tweaked. Rodgers hasn’t had enough time to master the new plays while missing so much practice time.

Also, compare the present inexperienced receiving corps to the one Rodgers had in 2011, the Packers 15-1 campaign when Rodgers was arguably playing his best football. That season, the wide receivers included Greg Jennings, Donald Driver, James Jones, a young Jordy Nelson and a rookie named Randall Cobb. At tight end, Rodgers had Jermichael Finley who had the speed and expertise to get deep and stretch the middle of the field.

The 2011 receivers were talented, deep and experienced. Rodgers knew those players were going to be in position and could make adjustments on the fly. They were reliable and ran the right routes. He believed in them. It appears this year, he doesn’t have a lot of confidence in his young wideouts, at least not yet.

Sure, Rodgers has played spectacular football in the past with backup receivers like Jared Abbrederis and Jeff Janis as his receivers, but that was for a game or two at the end of the year, not an entire season. Rodgers was also playing at the top of his game in 2015 and had a strong playoff performance in a losing cause in Arizona in the second round. Duplicating that over 16 games is a much more difficult task.

Rodgers is frustrated this season and you can see it in his body language on the field. Early on, his body just couldn’t respond the way he wanted it to. He is also unfamiliar with his young receivers who are also not always in the right position. The confident quarterback that told Packers fans to “relax” after a slow start in 2014 or boldly declared the team would “run the table” after a 4-6 start two years ago isn’t quite there right now. Rodgers is struggling and so are the Packers.

A reporter asked Rodgers if this was a “relax moment” after the Seattle game. The quarterback’s response was telling. “No, it’s not…It has to be an authentic moment for times like that. The moment will be right at one point for us to have a moment that gets us going in the right direction.”

That may be true, but unless it happens soon, it will be too late to get the Packers to the playoffs in 2018.