Nets have their way in win over Wizards 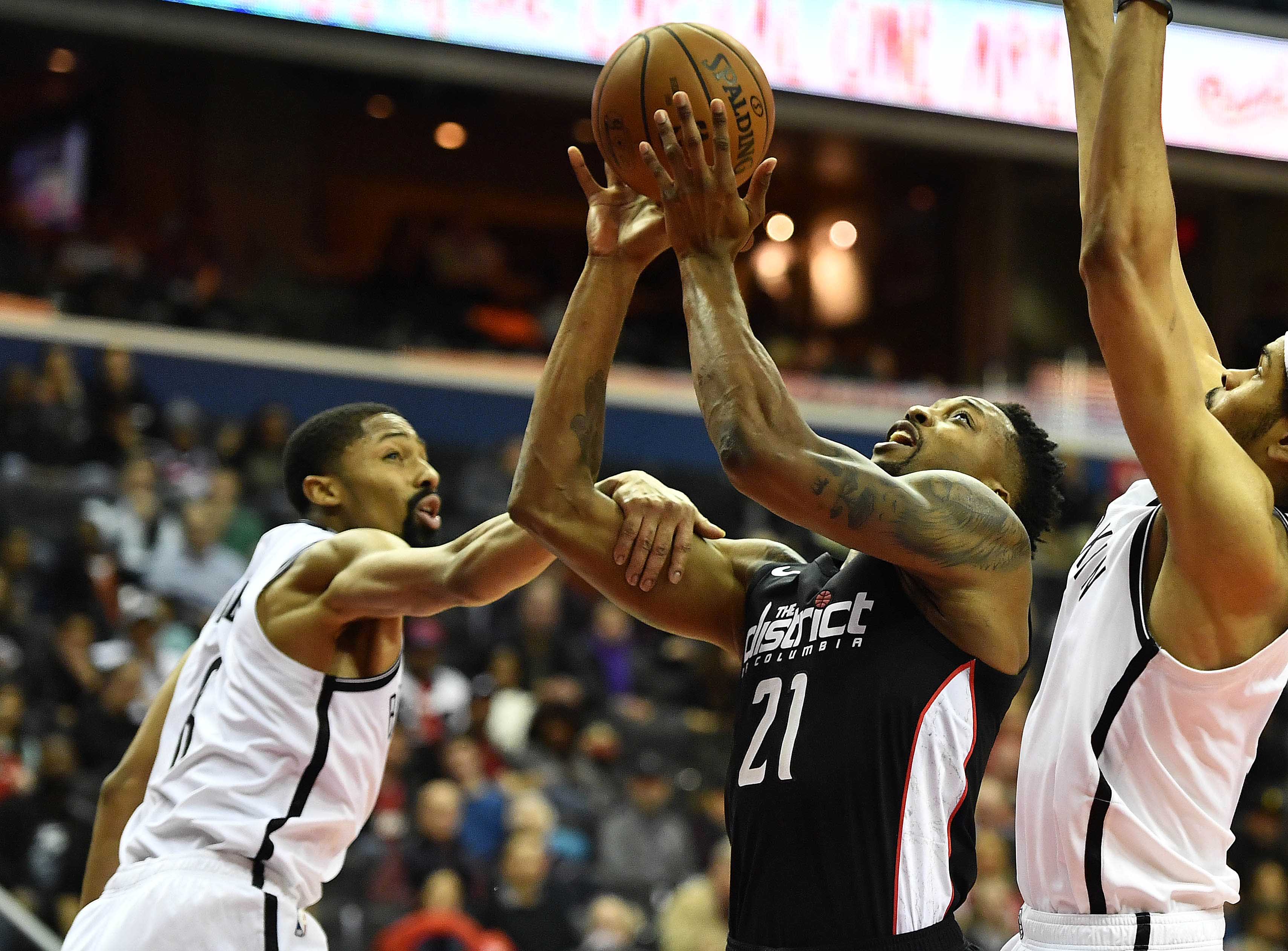 Nets have their way in win over Wizards

The Washington Wizards fell to the Brooklyn Nets, 115-104. Watch and read postgame reaction from the locker room below.

As for Brooklyn one could argue that they can go as the initials BK like Burger King. They did have it their way. The leader was Dinwiddie from the bench with 25 points on 8-of-13 shooting from the field and 3-of-5 from three. D’Angelo Russell chipped in with 23 points. Jarrett Allen added 16, DeMarre Carroll with 11, and Joe Harris with nine.

The Wizards game against the Nets was actually quite exciting the first 24 minutes. In the final 24? Brooklyn came roaring out of the gates. What was just a two-point game entering halftime turned into a lead of up to 19. Although the Nets shooting percentage was just .3 percent worse than the Wizards’ (42.2 to 42.5), the three-pointers, the points off turnovers and the points in the paint were what did the Wizards in. Brooklyn capitalized with 19 points off of 13 turnovers, had 44 points in the paint and hit nine three-pointers.

“Just communication. You got to get better at communicating on defense, continue to talk, continue to learn from one another, and not get down because we’re in a little hole right now. Just got to stay positive, continue to work as hard as we can. I think it’s going to turn around for us.”

The Nets took 33 three-point attempts while the Wizards only attempted 17. The Brooklyn defense was stingy in keeping the Wizards offense inside the arc. Dwight was asked how the three-point shooting can get more looks.

Dwight Howard says the defensive communication needs to get better (again) and that the #Wizards need to attack the basket more in these type of games where Brooklyn is trying to take away three's. pic.twitter.com/hy6qI8NLYF

Speaking of Dwight Howard, he had one of his most eventful nights as a Wizard.  He had his best offensive game, scoring 25 points on 9-of-13 shooting as well as 7-for-10 from the charity stripe. It wasn’t his final stat line that was impressive though. It was his start. Howard scored six of the Wizards first 12 points and had 11 points after the opening quarter. In the first half, Howard had 17 and a couple of dunks looking like “Superman” has dusted off the cape.

On the Nets drop defense:

“A lot of teams run it, it’s just a lot of teams don’t stay on the shooters on the weak side. They have a great big in (Jarrett) Allen that does a great job of blocking shots at the rim so they kind of just play a two-man game once you shoot two-pointers. We had some looks early on we just didn’t make them. They did a great job of getting out and making some baskets.”

On what the offense needs to do when faced with a special drop defense:

“You don’t want to probe and just hold the ball all day. We only took some good shots that didn’t go in and then we tried to attack and get to the rim.”

Wall doubled his point total from Wednesday night with 16 points, however, he shot 6-of-19 from the field and only hit one of his five three-point attempts.

On the sloppy defense:

“It was a lot of movement on their side so we just have to do a better job of staying in front of them, keeping them in the front so we can drag the defense in so we can kick out to an open three.”

On guarding and staying on your man:

“It’s really an individual thing on defense because it’s five people on the court and every person that’s kind of connected. If you let your man pass you, the next man has to help, his man is open the next man…. So it’s kind of a domino effect.”

Kelly Oubre reiterates that #Wizards have to do a better job of keeping their man in front of them: pic.twitter.com/k9C1cfq11l

On a weird night:

“It’s a giant circle. Everything correlates. Our bad offense leads to their good offense, you know what I mean? It is what it is. If they hadn’t taken the ball to the basket more, then they wouldn’t be running and gunning like they were. It seemed like constantly they were slowing up, picking, attack, pick, attack, guys were all over the place. It was a very unorganized night it seemed like on both sides. We gotta do better.”

On the bad shooting:

Austin Rivers says the #Wizards had an "unorganized" night and the #Nets "kicked our ass" (then apologizes and changes to butt).

"It's a giant circle, everything correlates. Our bad offense leads to their good offense." pic.twitter.com/xDv4naUlB4

The Brooklyn Nets are one of those pesky teams that gave the Wizards struggles last season. They lost two out of the three meetings last season, both at Barclay’s Center, before defeating them at home in overtime back in January. The Nets snapped a five-game losing streak in D.C. and appear to be on the rise as a young and talented team. They just simply, as Austin Rivers said, kicked their rear ends.

The Wizards three-game winning streak was snapped Friday night, but the Wizards hope to bounce back Sunday evening against Portland. Tip-off is at 6 p.m.