Dogs of the Desert: AFL Week 6 in Review for Glendale 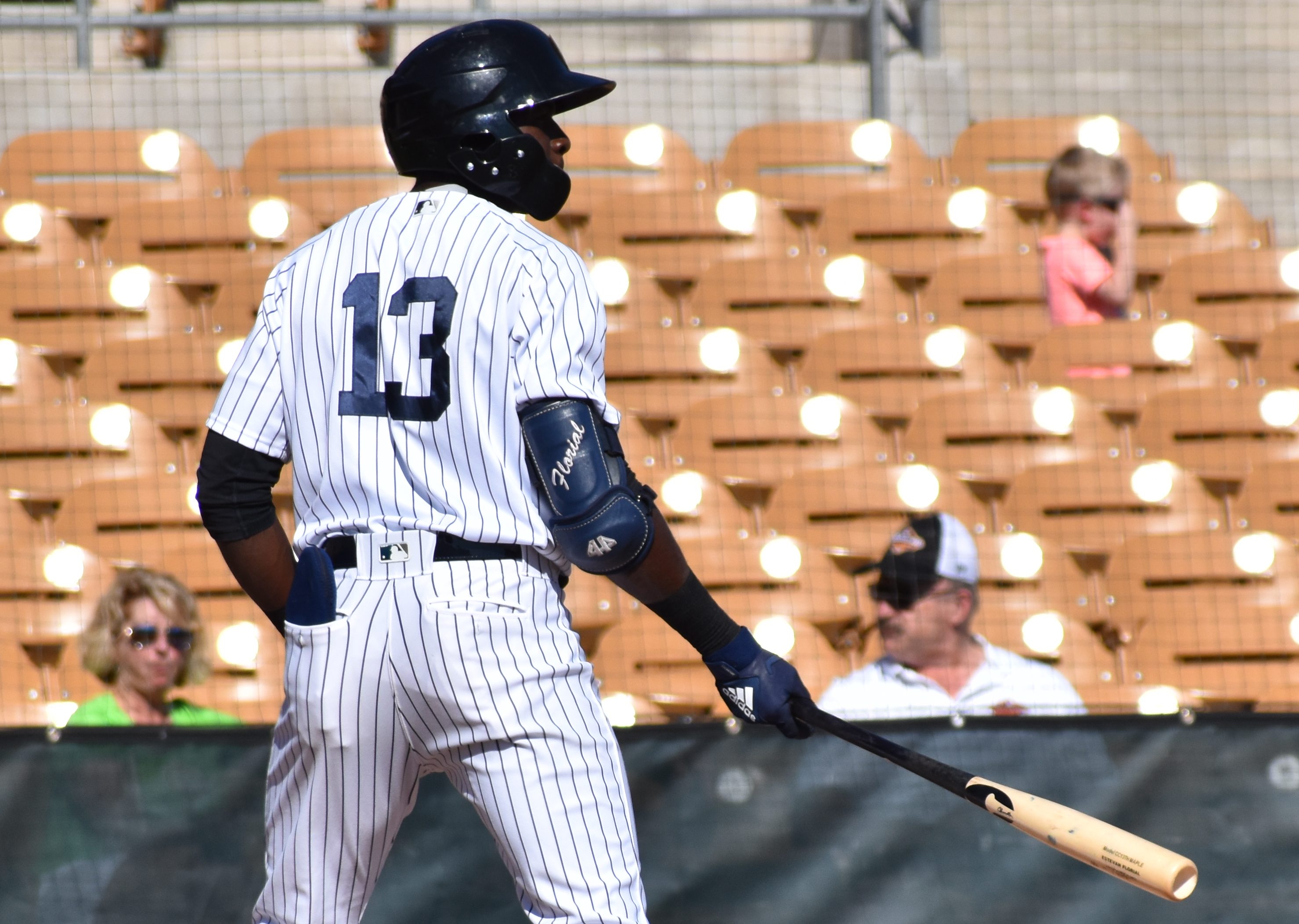 Dogs of the Desert: AFL Week 6 in Review for Glendale

The last week for the Desert Dogs in 2018 was a short one as they played just Monday through Thursday, knowing that Peoria had already locked up the division title and a spot in the championship game.

They started the week off against the Solar Sox and came back from a two run deficit to score four unanswered thanks to 5.2 innings of shut out relief. Tanner Chleborad (BAL), Rob Kaminsky (CLE) and Zach Thompson (CWS) each went more than an inning and combined to strike out five while allowing four base runners.

It was Mr. Double, Li-Jen Chu (CLE), who came through for the Dogs with his fifth double out of his seven hits this fall to knock in fellow Indian Connor Marabell for the first run for Glendale. A wild pitch would allow Estevan Florial (NYY) to score as well to tie the game. Marabell lead off the sixth with a single as well, but this time he and Florial came home on a Jared Walker (LAD) double to give the Desert Dogs the only lead they would need to win the game.

Craig hits for the Surprise Saguaros against the Desert Dogs during a 2018 AFL game at Camelback Ranch. – Joseph Coblitz, BurningRiverBaseball

Justin Garza‘s (CLE) poor performance continued from his second to last start into his final start of the fall as he walked the first two Saguaros he faced on Tuesday before allowing a single, then a three run home run to Will Craig (PIT) that gave Surprise four runs before an out was recorded. He would only make it through 1.2 IP and even that would have been impossible had it not been for Martin Cervenka (BAL) catching two runners attempting to steal second (he caught three of four throughout the entire game).

The bullpen didn’t provide much relief as the Saguaros ended up scoring nine, but Hobie Harris (NYY), Jay Flaa (BAL) and Dalbert Siri (CLE) each pitched scoreless innings, each allowing exactly one base runner and striking out at least one. Offensively, the Desert Dogs were held to just two runs, both scored in the sixth inning. Walker and Steve Wilkerson (BAL) each had two hits.

Tanner Banks (CWS) had a fine start in his last appearance on Wednesday, allowing just one run over five innings. As with his previous starts, Banks didn’t have a high strike out count as he K’d just one and finished the month with only ten strike outs in 22.1 innings. Among the Dogs with at least 15 IP, Banks had by far the fewest strike outs and also had the fewest walks with just five (two came in this game against the Salt River Rafters).

Cervenka gets a hit for the 2018 Glendale Desert Dogs. – Joseph Coblitz, BurningRiverBaseball

Jordan Sheffield (LAD) had been terrific all season, but he ended up taking the loss in his final appearance, allowing two runs on three hits and a walk while retiring just two batters. He still finished the season with a 1.93 ERA and just six hits in 9.1 IP.

There wasn’t much offense to talk to as the only runs came courtesy of Ryan McKenna (BAL), who was the Desert Dogs most consistent hitter all season. This would be his final game of the year, wrapping up with a .344/.474/.590 line with six doubles and three triples.

The River Rafters win on Wednesday clinched their play-off birth against the Javelinas, but the Desert Dogs would get a bit of revenge by beating the AFL East champions in their final game of the season.

Both Griffin Jax (MIN) and Jordan Foley (NYY) were knocked around for two runs in the first inning, but neither team would score again until the eighth. For Glendale, it was the type of bullpen performance that we have gotten used to as Jared Robinson (CLE), Flaa, Kaminsky, Siri and Thompson combined for the final five shut out inning, allowing just one hit between them. Surprisingly, Siri was the only reliever to strike out a batter and he K’d both hitters he faced in the 8th to earn the win.

Siri pitches for the Desert Dogs during the final game of the 2018 AFL season. – Joseph Coblitz, BurningRiverBaseball

After hitting safely three times in the first, the Desert Dogs had just four hits over the next six innings before ripping three more in the eighth to take the lead. Cervenka lead off the inning with an infield single, then was moved to second by a Florial single. After a wild pitch advanced both runners, Steven Sensley (NYY) came through with the go ahead triple. An inning full of incredible events, this was Sensley’s only triple of the season and he finished the fall with a .263 SLG and 9 RBI.

Since this wraps up the Arizona Fall League season (the championship game will be played tonight at Scottsdale Stadium between Peoria and Salt River), there will be a full review of the Desert Dogs season coming out Monday on BurningRiverBaseball.com and one specifically highlighting the Indians players on Tuesday.