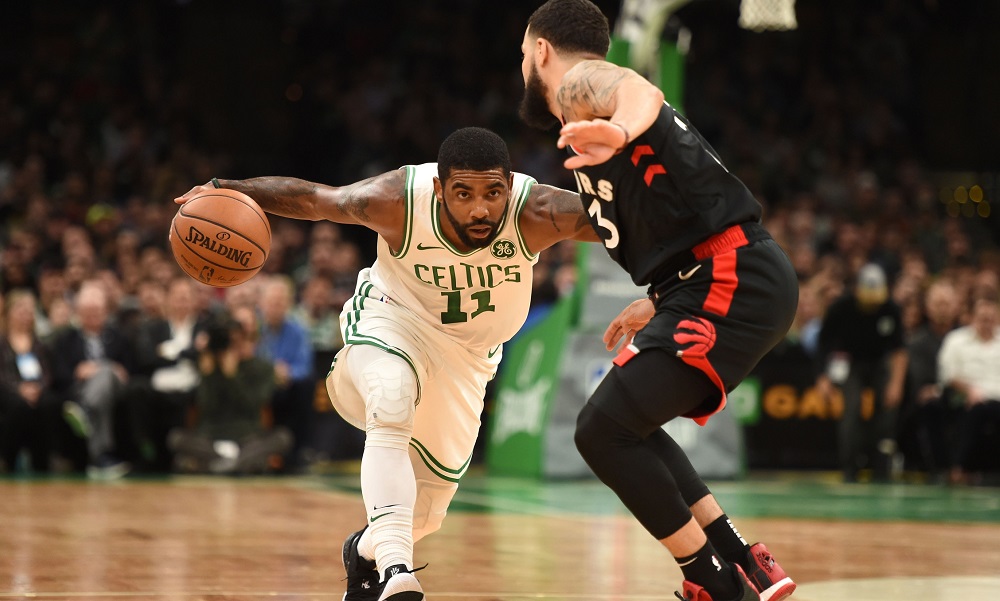 Kyrie Irving had a season-high 43 points, scoring 17 in the last 8:06 of the fourth quarter to force overtime and then making or recording an assist on every basket in the extra period Friday night to lead the Boston Celtics to a 123-116 victory over the Toronto Raptors.

Irving had 11 assists, and Jayson Tatum scored 21 with seven rebounds for the Celtics. Boston evened the season series at one game apiece against the only team to finish above it in the Eastern Conference last season. The home team has won nine straight matchups.

With a behind-the-back dribble, Leonard left Celtics big man Aron Baynes skidding near the blocks but, as Leonard entered the paint, Irving raced from the opposite side of the floor and with a left-handed swipe, slightly dislodged the ball from Leonard’s possession. Falling to the court, Irving reached out with that left arm and managed to force a jump-ball.

Considering Leonard’s oversized mitts and his pure strength, it was no small feat by Irving to force a tie-up.

Irving didn’t win the ensuing tip on his own but he challenged Leonard enough that Leonard’s swipe directed the ball directly to Tatum, and ultimately led to Irving shooting free throws at the other end.

An awful lot happened over the next 13 minutes of play but what was clear in that moment was that Irving was not going to be denied on this night. And time after time he came up with big plays that helped the Celtics emerge with a thrilling 123-116 triumph at TD Garden.

NBC Sports Boston: Kyrie Irving did it all in win vs Raptors

Coming into last night’s Garden matchup, Kawhi Leonard was 9-0 all-time vs. the Celtics. Kyrie made sure he didn’t stay perfect.

The Celtics have played only a half dozen games at home so far, but the win over Toronto was easily the most electrifying, most important, and ultimately the most satisfying.

This game was the proverbial roller coaster: a blown first-half lead, a fourth-quarter comeback, and an explosive overtime (four points each from Kyrie, Horford, Hayward and Tatum). Kyrie’s performance triggered some “King in the 4th” type flashbacks. And the Celtics got some revenge for their loss at Toronto, while making it clear that the Raptors aren’t going to cruise through the division.

Tatum (19 of his 21 points came after halftime) and Hayward (more on him below) gave Kyrie the help he needed, but nobody – not even Kawhi, with 31 points, 15 boards, four assists and three steals – could prevent Kyrie from dominating this game.

Here are some Kyrie highlights and tidbits.

Uncle Drew (43 PTS, 11 AST) took over down the stretch in the Celtics OT win over the Raptors! 🔥👀 pic.twitter.com/VbNqQGzvF7

In yet another case of #Celtics Kyrie Irving being The True Most Interesting Man in the World, when asked after he went off for 43 & 11 tonight what it's like when he has it going like that, he responded: "Peaceful."

Even a certain someone was impressed.

That boi Ky was in his 💼 tonight!!

While Kyrie’s play made one type of statement to the Raptors, he made another afterward to Boston fans, gushing once again about how much he loves where he is.

On the heels of Boston’s thrilling overtime win over the Raptors on Friday, Irving’s praise for Stevens and reference to a future together only seemed to reaffirm his appreciation for his current situation.

“Our relationship is growing every single day so I think that he’s such an intelligent basketball mind,” Irving said of Stevens. “So I give him his space and then, as well as who I am as a player and what I can do out there to create and generate offense and defense, he gives me my space as well. So I just think there’s just a mutual respect there. So if he sees something I’m going with it. And if I see something, he’s going with it, as well as the rest of the team.

“So it’s just been an ongoing, growing relationship which I’m appreciative of for the next years to come.”

The Celtics are now 9-6, have a favorable schedule coming up, and Kyrie is happy and performing at his peak. That’s a lot to feel good about.

Yahoo: Did Kyrie Irving just have his best game as a Boston Celtic?

Of all his numbers last night – 15 points, five rebounds, five assists, four steals – none may have satisfied Gordon Hayward more than his 39 minutes.

The Celtics beat Toronto in overtime, 123-116, and the Celtics forward, his minutes restriction removed for at least one night, was allowed to blend into crunch time. He hit the two free throws that sent the game into OT, when he scored the Celtics’ first four points.

“I was wondering if they were going to take me out of the game at some point in time,” said Hayward. “I’m glad they left me in to play that many minutes. It’s been such a long time since I’ve done that. That was a good confidence booster. … Playing in that kind of game, with the crowd and that atmosphere, that was amazing, that was a lot of fun.”

“It’s great to be able to see he’s getting comfortable,” Aron Baynes told NBC Sports Boston. “You can see it by the end of the game.”

When Hayward plays like he did on Friday, it “takes some pressure off of Kyrie (Irving) as well, JT (Jayson Tatum), everyone, one through 15,” Baynes said. “That’s what makes it fun with this team.”

I was shocked when, late in the fourth quarter, I looked at the box score online and realized Hayward had already played more than 30 minutes. The playing-time limit was gone, and he looked strong.

Hayward then came through big-time when he was fouled with 24 seconds left and Boston down two. He calmly swished both free throws, just as expected from someone with his talent. He also scored the Celtics’ first four points in OT, giving them the lead for good.

It was a big step for the Butler product. Now the question is, can he do it again just 24 hours later? Because, thanks to an extremely rare two-home-games-in-two-nights, the Cs host the Utah Jazz this evening. The same Jazz who won a revenge game in Utah last week, and whose fans booed Hayward every time he touched the ball.

I think Hayward, the Celtics and the Garden crowd will all be ready.

Globe: Gordon Hayward takes his biggest step yet with Celtics

And, finally… It still stings

The trade—The Trade—was supposed to elevate the Nets to title contenders. It ultimately crippled the franchise.

King wears The Trade like a scarlet letter. It’s the first line of his resume. It’s in the first paragraph of his Wikipedia page. Others involved in The Trade have moved on. Bobby Marks—King’s assistant GM—is a respected insider at ESPN. Frank Zanin, then the Nets director of player procurement, was scooped up as a pro scout with Oklahoma City. King left the Nets after the 2015-16 season. He has had little more than a whiff of NBA interest since.

It’s overstating it to say the deal haunts King. But it’s close. He admits he revisits it in his mind routinely. He thinks about the number of picks he included, and what would have happened if he fought to take one of them off the table. He thinks about the swap rights, and what might have been had he said no.

Said King, “I go back and forth all the time.”

Kind of feel bad about this for Billy King the person, but as a Celtics fan … cheers, Billy!

Herald: Bulpett: Celtics’ overtime win had a May feel

NBC Sports Boston: Stars, studs, and duds from the Celtics’ win over the Raptors