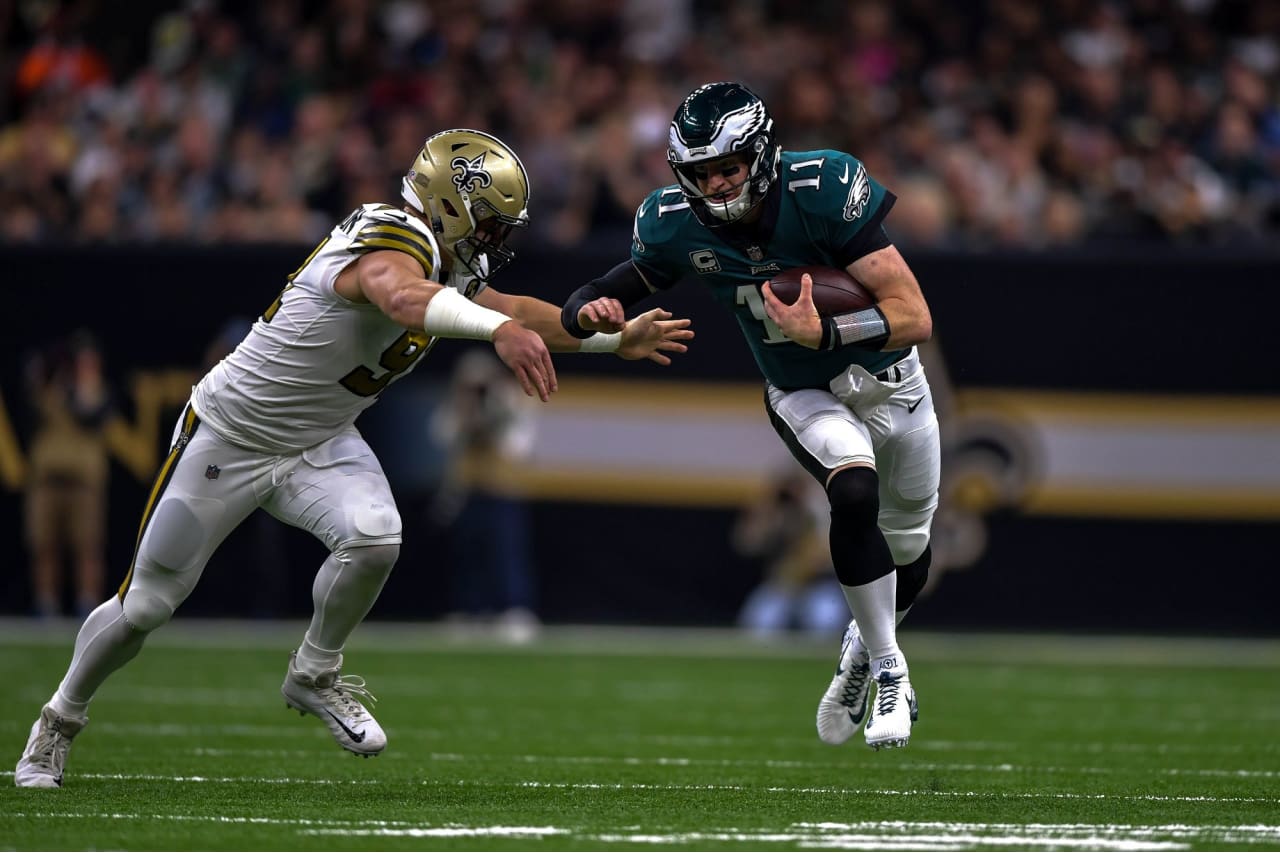 My “team spirit” rant looks stupid right now, but I still think it will come into play heading down the final six-game leg of the schedule. At 4-6, the Eagles are still in the divisional race, as the Cowboys win again and the Redskins lose.

But to be realistic the Eagles will probably have to run the table to take charge of their own destiny in 2018. That’s a tall challenge as even more injuries pile up against their defensive secondary, and center Jason Kelce is dealing with an elbow issue.

We at least led the league in helmets thrown in disgust this week. I’ve never seen so many bonnets tossed since Lenny Kravitz gave Lisa the boot.

Oh gosh, we played a horrible game defensively. Maybe Malcolm Jenkins played a good game from his free-wheelin’ safety position based upon what I saw on TV, but everyone else seemed a tick or two off the beat.

Offensively we were flat. Extremely predictable playcalls and formations, apparently… at least based upon the New Orleans defensive reactions.

The Eagles were blanked in the opening quarter for the eighth time in 10 games and found minimal success the rest of the way, allowing Drew Brees and the Saints to speed ahead en route to an easy 48-7 win, dropping the defending champs to 4-6 in the process.

New Orleans was ranked 31st in pass defense coming in, yet Wentz threw for just 156 yards and tossed three interceptions.

Back to the defensive shortcomings: injuries to the secondary left safety Malcolm Jenkins surrounded by a bare-bones cast that included Chandon Sullivan, De’Vante Bausby, Rasul Douglas, Cre’von LeBlanc and Corey Graham. The front four was unable to generate a pass rush. New Orleans outgained the Eagles 547-196.

Drew Brees passed for 363 yards and four touchdowns, completed 22 of 30 passes and did not turn the ball over, giving him 25 TD passes and only one interception this season. Brees’ fourth touchdown seemed to encapsulate New Orleans’ audacious approach to the game. He hit running back Alvin Kamara in stride down the right sideline for a 37 yards on a fourth-and-7 play that gave the Saints (9-1) a 45-7 lead early in the fourth quarter.

Brees’ other touchdown passes went for 3 yards to Austin Carr, 15 yards to rookie Tre’Quan Smith and 23 yards to Michael Thomas. Smith finished with 10 catches for 157 yards, while Thomas’ four catches for 92 yards made him the first receiver in Saints history to surpass 1,000 yards receiving in each of his first three seasons.

Mark Ingram rushed 16 times for 103 yards, including touchdowns of 14 yards and 1 yard. Kamara added 71 yards to help New Orleans finish with 546 total yards and score at least 40 for the sixth time this season.

Carson Wentz was intercepted three times — once by Marshon Lattimore and twice by Chris Banjo — and finished with 156 yards on 19-of-33 passing.

Time will tell if the lopsided loss marked the beginning of the end of the Eagles’ title defense. Philadelphia (4-6) remained two games behind Washington (6-4) for first place in the NFC East, but more injuries befell their already depleted lineup. They offered virtually no resistance to New Orleans and looked thoroughly outclassed by the surging Saints.

Rookie running back Josh Adams rushed for a 28-yard TD that pulled the Eagles within 17-7 in the second quarter, but the Saints responded with Smith’s TD in which the receiver held onto a hard throw over the middle while being sandwiched by two defenders. That made it 24-7 at halftime and the game was not competitive after that.

INJURIES: Eagles: Center Jason Kelce hurt his left elbow in the first quarter and was replaced by Stefen Wisniewski. Safety Avonte Maddox left with a knee injury on New Orleans’ second possession. Defensive back Rasul Douglas had to be helped off the field with a left leg injury in the third quarter. Long snapper Rick Lovato was taken from the game to be evaluated for a concussion. Sidney Jones (who looked at least a step slow from his previous hamstring condition) also left the game with a twisted ankle. LB Jordan Hicks suffered a strained calf muscle and could miss the next game.

UP NEXT: Eagles host the New York Giants on Sunday.