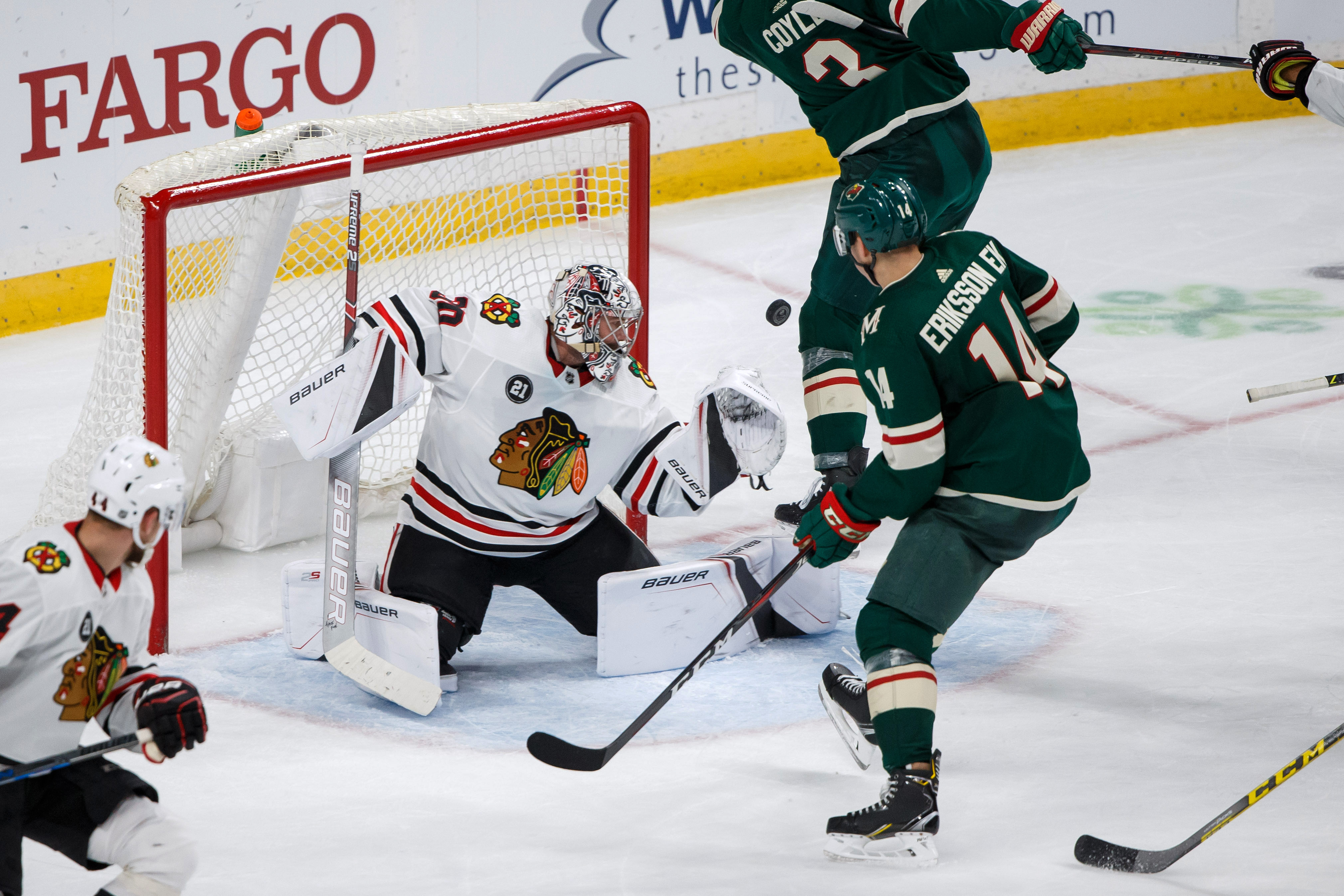 The want to redeem one’s self after disappointment can be a pretty powerful feeling.  At least that is what the Minnesota Wild are hoping after squandering a 2-1 lead to the Buffalo Sabres the night before only to lose the game 3-2.  The want to redeem one’s self can also apply pressure not to make the same kind of mistake which can mess with a person’s confidence which is probably what the Chicago Blackhawks are hoping for.

Chicago has had a coaching change since the two clubs last played one another as Joel Quenneville has been replaced with Jeremy Colliton.  Chicago has still had its share of struggles since the coaching change but expect to see the Blackhawks looking to take advantage of a Wild team in the 2nd game of a back to back.  Will the Wild respond to last night’s disappoint with a victory this evening?

1st Period Thoughts:  Both clubs were looking to create scoring chances from in-close in the first few minutes of the game.  Minnesota nearly connected as Jason Zucker set up Mikael Granlund for a quick shot that Corey Crawford stopped and the puck was swept away before Eric Staal could reach the rebound.  Chicago would counter with its top line and Jonathan Toews fed a pass over to Brandon Saad who fired a shot off the rush that was steered to the corner by Alex Stalock.  A few minutes later an absent minded backhand pass by Zucker went right into the slot that was pounced on by Alexandre Fortin but luckily Stalock was able to hold on for the save.  The Blackhawks were doing a good job of disrupting the neutral zone, forcing errant passes and not allowing the Wild to get much flow going.  Minnesota would go to the penalty kill after a ‘too many men’ penalty.  Chicago would strike about a minute into the power play as Patrick Kane set up Toews for an easy door-step tap in.  1-0 Chicago.  Minnesota would try to press for the equalizer, as they hold to create some traffic in front of Crawford and work for deflection chances.  Crawford was calm and poised, making saves with relative ease despite having bodies near the blue paint.  The line of Zach Parise, Nino Niederreiter and Mikko Koivu crashed the net and Crawford had to fight of 3-4 shots from in close as Niederreiter continued to jam, poke and hammer away at the puck hoping to tie the game.  Chicago’s top players were looking plenty dangerous as Toews drew defenders towards him as he set up Brent Seabrook for a chance as he pinched down low but his shot would fortunately miss wide of the Wild goal.  Jonas Brodin would end up in the sin bin for hooking giving Chicago’s power play an opportunity late in the period.  Minnesota’s penalty kill did a good job of pressuring the puck carrier and the Wild would escape unscathed.  Chicago would catch Minnesota flat footed defensively as Saad turned on the jets to fly by Matthew Dumba and as Saad attacked the net Stalock tried to poke check but he’d miss and the Blackhawks forward buried the easy goal.  2-0 Chicago going into the 1st intermission.  The Wild seemed to be struggling against Chicago’s superior team speed as they were dictating the pace of play.

2nd Period Thoughts:  Minnesota started the period with noticeable change in their energy from the 1st period.  The Wild were working their way in close and lurking near the Chicago crease for rebounds and this would cause the Blackhawks fits.  Minnesota was moving its feet much better and forced Chicago to scramble a bit, but they still were able to get sticks on pucks at the right time to disrupt the Wild’s attack.  The Wild’s hard work would earn them a power play and Minnesota would cash in.  After a discombobulated first minute of the man advantage the Wild would eventually get set up in the zone and it was Koivu setting up Parise for a tap in goal from the crease.  2-1 Chicago.  On the very next shift, some strong play on the puck by Granlund would draw a penalty on Toews putting the Wild back on the power play.  On the power play the Wild had great puck movement as they set up Staal for a few chances that he just failed to bury.  The Wild were retrieving the puck well and Minnesota was playing with the desperation of a team pushing for the equalizer in the last minute of a game.  Chicago knew it was playing with fire so they used their top line to create some pressure in Minnesota’s end and they’d draw a penalty as Joel Eriksson Ek got sent to the box for tripping.  The Wild would go on the attack shorthanded as Marcus Foligno and Eric Fehr nearly cashed in on a chance near the Chicago crease.  Minnesota would get the kill with little pressure created by the Blackhawks.  The period would end with the Wild trailing by one, but you had the sense the team was ready to dig in to do whatever it takes to get the equalizer and the go-ahead goal as well.  It was great to see the sense of urgency in the 2nd period instead of just in the last few minutes of the game.

3rd Period Thoughts:  The Wild were swarming early to start the 2nd but still couldn’t get one by Crawford.  The best early chance on a big rebound created by a Jordan Greenway shot that Eriksson Ek overskated instead of shoveling it home.  Chicago would try to counter attack and Stalock got tested a bit on a shift from the Toews-Kane-Saad line.  A scary moment occurred about halfway through the period as Marcus Foligno blocked a slap shot from Henri Jokiharju that hit him on the inside of the left knee that left him in a great deal of pain.  The Wild training staff would move in to help Foligno off the ice and he was unable to make his way to the locker room without two members of the training staff helping keep weight off the injured knee.  The Wild were trying hard, but the jump wasn’t quite there at times and they’d need some kind of break.  That would eventually happen when Zach Parise drew a tripping call on Seabrook.  On the power play the Wild again created good traffic in front of Crawford, including a nice redirection chance by Charlie Coyle off shot from the high slot by Staal that rang off the pipe.  Minnesota would keep pressing, as Niederreiter rang a shot from the slot off the post and out.  The Wild would pull Stalock for an extra attacker and they again came dangerously close to tying the game but at the crucial moment couldn’t get a stick on the puck when they needed to.  Dominik Kahun would intercept a pass near the Chicago blueline and skate up the ice for the empty netter to seal a 3-1 victory.

Alex Stalock didn’t too bad, making 25 saves in the loss.  While at times it looked like he was fighting the puck the Blackhawks created their share of tricky redirection chances and that drew rebounds from Stalock.  He probably wants that missed poke check on Saad’s goal though.  Overall though, he kept Minnesota in the game long enough to at least tie it up.  Matthew Dumba had a rough night and I thought Ryan Suter looked fatigued most of the game.

Offensively, it was sort of the same story from the Buffalo game the night before.  The Wild created lots of quality opportunities but at the crucial moment they just couldn’t bury it when they needed to.  The power play did a great job at generating quality scoring chances, but a post here, a near miss there and ultimately it wasn’t enough to get the job done.  The team made Eriksson Ek a scratch last night, but in a way he highlighted why he was a scratch tonight.  With a chance to bury a goal when his team needed it off of Greenway’s rebound he overskates it instead of having his stick on the ice to bury it.

The injury to Foligno is a bigger blow than most would like to admit.  While he’s a 4th liner, he’s been very good on the penalty kill and has moments where he’s used his big frame to work pucks in close.  I fear he could be out a bit (or long term) based on how gingerly he left the ice.  That would likely mean Matt Hendricks will get an opportunity or possibly a call up from Iowa.  If they’re looking for a tougher player from Iowa who has been playing well, Mike Liambas is a good soldier that isn’t quite as big as Foligno but he’s just as tough and plays a similar game.  The team gets a few days off before another few games at home during the Thanksgiving week.

Iowa took a late-night bus trip to Chicago for last night’s game after a hard-fought battle against Milwaukee.  The Wild had surprising energy to start the game but couldn’t manage to get a puck by Maxime Legace.  Chicago would score late in the 1st period when Brandon Pirri found a little space on the power play and he’d snipe a shot by Andrew Hammond.  Iowa would answer back in the 2nd period on the man advantage as Gerald Mayhew fired a shot by Legace.  The Wild would add to its lead late in the period as Kyle Rau would crash the net and through persistence put a puck into the back of the net.  The Wolves would tie the game early in the 3rd period as former Wild draft pick Reid Duke gathered up a loose puck and he fired it in.  Iowa would answer back just 50 seconds later as Dmitry Sokolov ripped a shot from above the left faceoff dot that deflected off a Wolves’ defender and by Legace.  3-2 Wild.  The Wolves would tie the game again as Pirri scored his 2nd goal of the night sending the game to overtime.  In overtime, it was a back and forth affair with both clubs trading scoring chances.  Cal O’Reilly would find a little space and he’d dish a puck to a speedy Gerry Fitzgerald who was flying into the Chicago zone and he’d rifle a shot by Legace to give Iowa a 4-3 victory.  Hammond had 22 saves in the win.

C – Alexander Khovanov (Moncton, QMJHL) ~ the skilled Russian had a goal and an assist and 3 shots on goal in Moncton’s 5-4 win over Baie-Comeau on Saturday.  He then followed it up with 2 goals and an assist on 4 shots in the Wildcats’ 8-4 win over Chicoutimi on Sunday that gave him 1st star honors.  Khovanov has 14 goals, 29 points 38 PIM’s and is a +5 in 23 games.

LW – Brandon Duhaime (Providence, H-East) ~ the Plantation, Florida-native had a pretty good weekend for the Friars as he had 4 points in two games against Merrimack.  On Saturday night, Duhaime had a goal and an assist and 4 shots on goal in Providence’s 7-5 series sweeping victory.  Duhaime has 5 goals, 8 points, 14 PIM’s and is a +6 in 11 games.

RW – Nick Swaney (Minnesota-Duluth, NCHC) ~ the Lakeville-native probably won’t forget Saturday night’s game against Denver for a long time.  He had a goal and assisted on the game-tying goal with just one second left in regulation before Minnesota-Duluth vanquished Denver in overtime, 4-3.  Swaney has 4 goals, 9 assists, and is a +3 in 12 games.