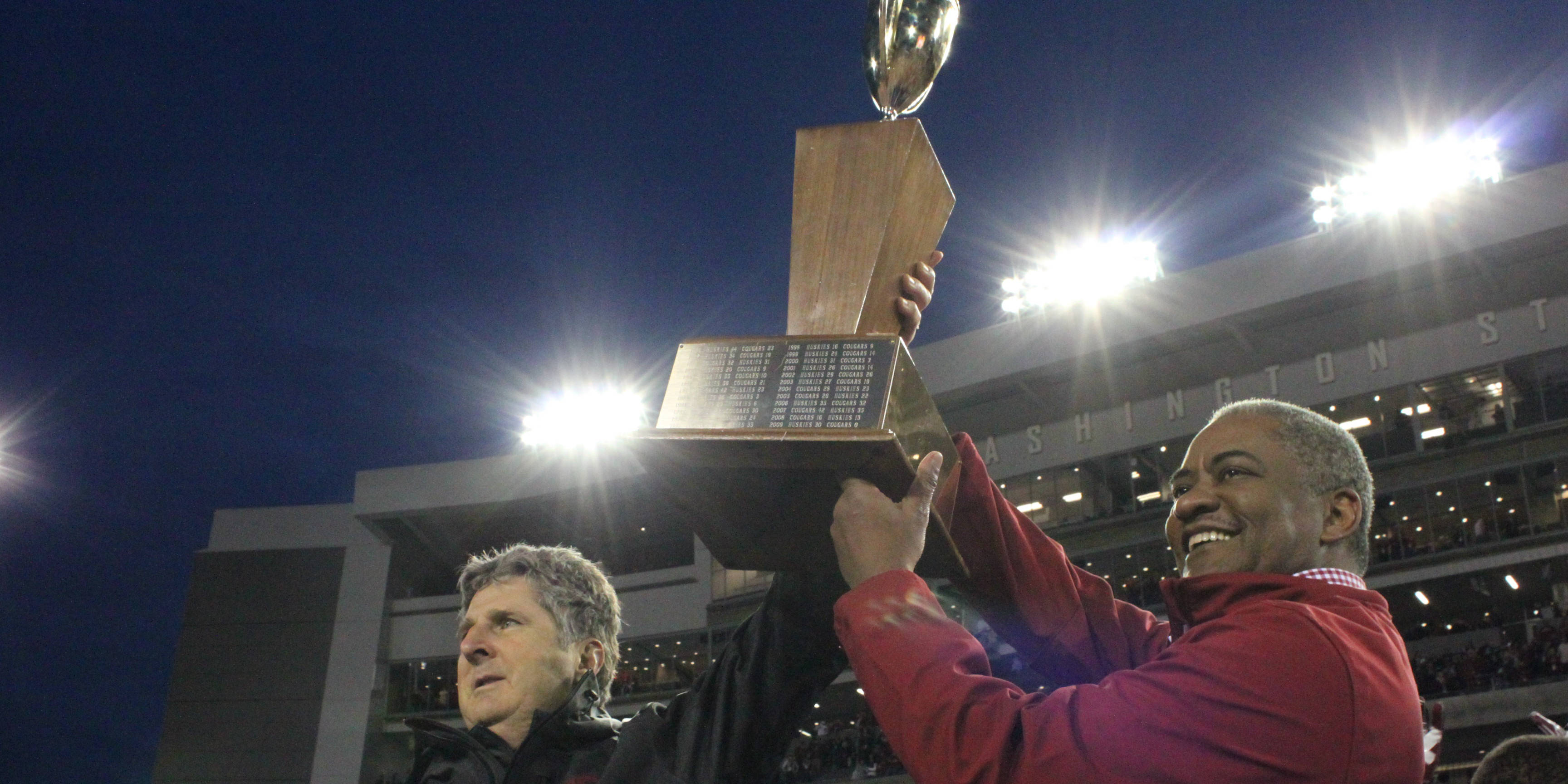 Happy Thanksgiving to you, Followers.!  Hope your Holiday Season is off to a great start!

Following Saturday’s 69-28 shellacking of the Arizona #Mildcats, our Washington State Cougars now sit at 10-1 and are now able to play for Trophies the rest of the way.

And if you take a moment to reflect on this incredible season, the fact that we can be focused on the possibility of playing multiple Trophy games in the coming weeks is nothing short of remarkable. Consider:

Of course, that’s my typically long-winded way of saying that the expectations for the season have not only been surprising, they’ve been constantly evolving. Each week, this team finds ways to exceed expectations at the same time that they have silenced many of the YIPS brought forth by prior season’s failures/shortcomings. And so, as we look forward to our prospects for the 2018 Apple Cup, the question that should be on all of our minds is a resounding:

First of all, let me be among the first to state how much I have come to HATE the Apple Cup.  And because I hate the Apple Cup (and Hate Week) so much, it’s hard for me to provide an objective view of this game, espeically as vacillate between the inevitable sense of optimism that emerges around drink #3 on Thanksgiving Day, and the lingering sense of dread that follows me from Sunday-Thursday of this week (and then typically re-emerges from the post-game to, well, about two days before the Apple Cup the following year).

So, given all that angst, let me break my prediction down into about four parts.

In my thousand year journey of ruling (figuratively) the Cosmos, I have learned that the best way to predict a final score is often to start by predicting a final score.  That is, I start with a “baseline score” and then I try to find ways to tinker with it based on match-ups, intangibles, and the like.

This year, the Washington Huskies seem like a fairly easy group to peg because their tendencies have been consistent  from the first game of the year through their penultimate contest.  Offensively, they are a ball control, game management outfit that is led by one of the best running backs in the conference (and for the past decade for that matter!) as well a quarterback that is as good (and as TOUGH) as they come when he’s right.  Meanwhile, their defense, though not as dominant in some ways as year’s past, is only a sliver short of being a spectacular unit, IMO.  And so, when you combine those “truths” you get a baseline score that mirrors the Dawgs’ performance against conference foes for most of the year.

And that score is:

Now for me, the question is how much do I tinker with that score given what we have been learning about us?  So, here we go:

1) We haven’t scored more than 17 points against UW in any Apple Cup since Leach’s first year at WSU.  Moreover, when you factor in that we are now good for a missed extra point a game, that projected WSU score of “16” score fits our historical average/limit against the Huskies.  That said, it is noteworthy to me that UW is lacking the kind of first round Nose Tackle that we’ve seen from them the last four years (i.e., Vae and Shelton).  And while Gaines is still a damn good player, they’re especially brutal when he’s their second or third guy pounding down the middle. And to that point, as good as their secondary is and has been, it’s been that bull rush up the middle that has led to all of those interceptions and forced throws by Falk and Bender.  So, when you factor in Minshew’s ability to scramble a bit, you have the ingredients to increase our scoring total, even in the rain.

2)  Even though Jake Browning showed that he can beat us over the top in year’s past, UW now features a ball control offense.  And part of the reason why they’ve toned down Peterson’s typical “razzle dazzle” nightmare  is that: (a) UW hasn’t pass protected particularly well this year; and (b) Browning doesn’t do well when the rush comes from up the middle—a la our delayed blitz stuff with Woods (He’s nails when he can scramble downfield from the rush).  The result is that, since the Utah game, the Dawgs have complimented a Gaskin-heavy rushing attack with a high efficiency passing game that is now once again featuring the TE.  In short, even though we’ve shown we can stop the run the last several weeks, we showed once again last week that we are still pretty vulnerable on the back end. And that makes me think at first glance that the “27” prediction is probably pretty close to the mark, especially if the game was played at a Neutral site and turnovers were kept to a minimum.

3) One of the hidden explanations for the outcomes of previous games can be traced to another one of my least favorite teams in the Pac-12: CAL.  If you remember, for the past several years, those Berkeley Bears featured the “Bear Raid” offense. And although Sonny Dykes’ Bear Raid differed from Leach’s Air Raid in several respects, it also shared lots of the same route patters and the like. The result: The Apple Cup always represented a “second prep” against the Air Raid for UW.

Well, this year, the Tables are reversed a bit in that regard. In other words, UW now represents our second chance to see that Justin Wilcox/Pete Kiatkowski defense, while the Apple Cup represents UW’s first big prep against the Air Raid.  And while WSU struggled to get 19/20 in the CAL game this year, the fact of the matter is that game provided a lot of tape, experience, and success that we can build on.  It also helps that the CAL game was played in conditions that figure to be similar to those we’ll see on Friday night.

Based on the issues highlighted above, it seems like there’s just reason to keep UW’s score the same but to give us another touchdown.

There are three final factors—beyond the weather—that I think will be key in determining the outcome of this game.

First, as Kevin Sumlin noted in his post-game presser on Saturday night, Arizona came into the game thinking that the Cats would be able to get to Minshew with their pass rush.  Of course, they couldn’t.  And you can bet that UW is going to look at the Tape and realize that if they allow Minshew to sit back in the pocket all day they are going to get lit up. So, even though it’s not entirely in their character to blitz a lot, I expect the Dawgs to bring the heat most of the day/night on Friday.  Ultimately, that might keep the score down, but it also threatens to open the Huskies to give up more explosives than they typically do.

Second: If UW sends the house –presumably up the middle—then that’s going to mean a lot of press coverage.  For me, that means that the screen game to Boobie-Borghi is gonna be huge and it also means that the slant game to Dez Patmon is going to be critical.  In short, if we are going to win on Friday, I would bet the farm that our RBs and Dez had really big games.

Third:  Over the past two weeks, we’ve seen one really important development with our defense. And that development has been the emergence of our own version of Rush 3, drop 7-8 (often with a spy).  Mind you, I have no idea about how that will all work on Friday, but if our rushing defense holds true to form on Friday night, I would think that UW might have a real difficult time moving the chains consistently on third and long—provided that Woods and Pelluer are able to generate pressure up the middle on those delayed stunts.

In total, these factors make me want to adjust our total slightly upward:

All things being equal, I think that the score above is the best score for this game, assuming that we can convert our extra points. The one factor that I didn’t mention—which could be huge—concerns the psychology of both teams in a big time game.  Obviously, the Cougs have a HUGE mental hurdle to overcome in this one based on past games. And for that reason, a quick start by the Huskies could once again lead to the type of runaway that we’ve seen for the past several years—and boy would that SUCK!

For that reason, I cannot understate how important it will be for us to avoid getting down by more than one possession early in the game.

The good news here is that Minshew—by virtue of being a Southerner and Grad transfer–won’t give two sh#ts about UW and/or our prior history in this game.  And that bodes well for us, since I think that the outcome of this game depends in large part on our belief that we can get this done—and that belief will be driven in large part by his confidence and overall demeanor (that is, his ability to stay and play loose).

In contrast, UW has played tight for the entire season.  And truly, I think the driving facilitator for a Husky victory in this one is their resounding belief that they have our number in a BIG WAY.   And so, if we come out of the gates quickly in this one, we might actually see this game get away from them!

For all of these reasons, this is truly the first Apple Cup that I can remember that feels like it could go in any/all directions.

In the end, my “objective” view is to take the score above, factor in the rain/weather, and then adjust the final score slightly downward since teams often struggle early in the rivalry games as they try to fight off the nerves and adjust to the other team’s initial game plan (e.g., it was 7-0 UW last year at the end of the first quarter).

In the end, I’m going to call it WSU 26 UW 23 in a game that could very well be decided by the kickers.  #MazzaTov

Let’s keep the magic rolling, shall we?