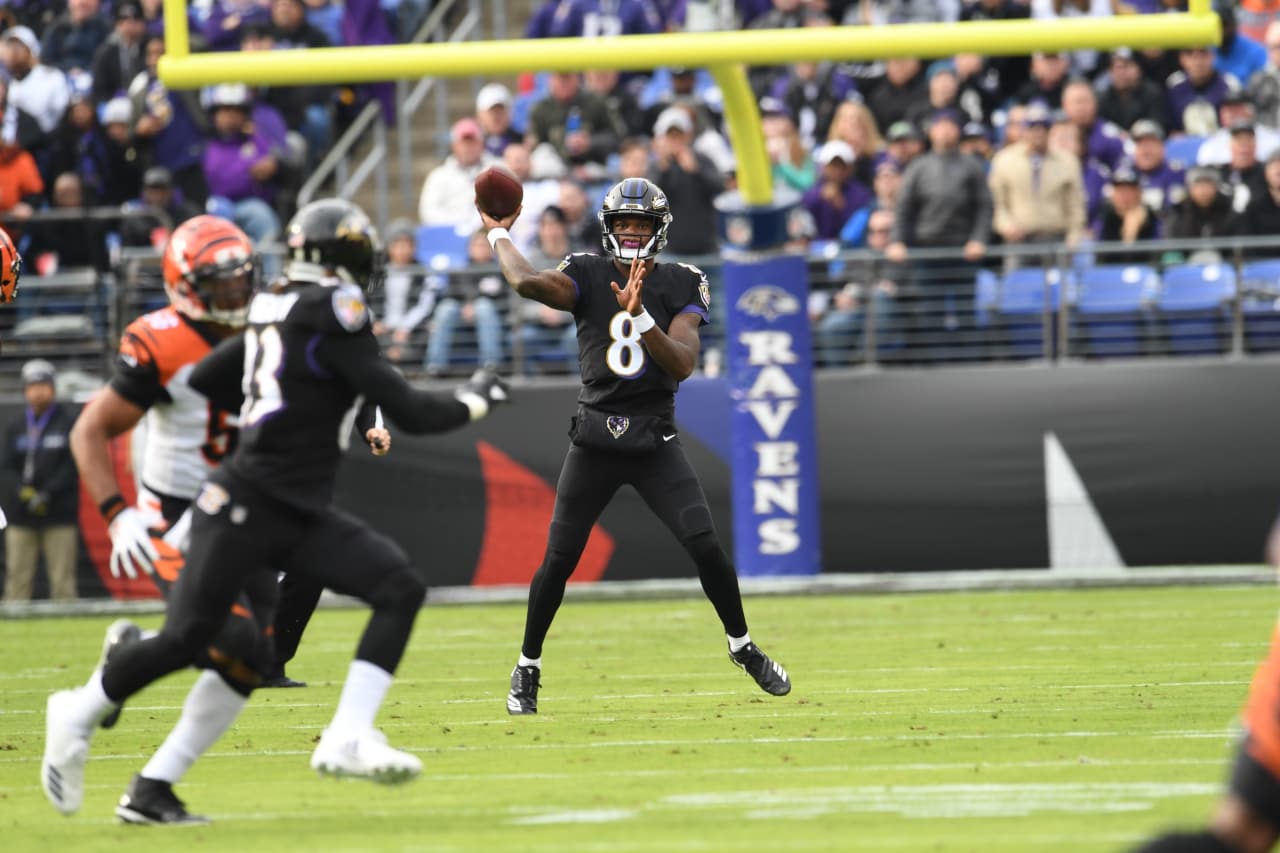 Young Lamar Jackson did just enough with his feet on Sunday to keep the Baltimore Ravens in contention for a wild card spot in the AFC.

Jackson, filling in for the injured Joe Flacco at QB, ran a ground-centric offense with a ton of the old option running plays and quarterback draw plays which characterized American football of a hundred years ago. The Bengals just couldn’t keep up or adjust fast enough.

The old-time approach worked for the Ravens—at least for one must-win game. I doubt the running-quarterback style of offense will be sustainable, as Jackson absorbed many, many legal full-contact hits. But for one day, it worked out well and kept the Ravens in the race.

Mike Preston of the Baltimore Sun had a few observations:

“Certainly John Harbaugh knows that the Ravens won’t beat the good teams in the league with rookie quarterback Lamar Jackson running the ball 27 times for 117 yards. This is the NFL, not Ohio State versus Michigan from the 1960s and 1970s.”

“Today, it’s one-on-one football,” Bengals coach Marvin Lewis said, “and if you’re supposed to keep leverage inside/outside, you’ve got to keep leverage and get it done. That’s the difference with a running quarterback. That’s why the quarterbacks don’t run forever in the NFL. Sooner or late, they get hurt and they don’t run the same.”

“Harbaugh knows the dangers of having his quarterback take so many hits. He knows he has to throw the ball downfield and get his wide receivers more involved in the game plan than the eight passes they caught. But Sunday was about survival, and the Ravens succeeded with an offense built around Jackson’s running ability.”—Mike Preston

Perhaps lost in the glare of the Lamar Jackson hype is the Ravens defense played well and they shut down one of the best running duos in the league in backs Joe Mixon and Giovani Bernard. Outside linebackers such as Suggs and Matthew Judon were diligent in holding the edge, and defensive linemen like tackles Brandon Williams and Michael Pierce got enough penetration and pressure to consistently interrupt the Bengals offense. Just as importantly, cornerbacks Jimmy Smith and Marlon Humphrey were physical and got their hands on receivers, the first time that has happened in recent weeks.

“The Ravens still have problems on defense. They don’t have safeties who can cover. The pass rush can disappear at times, too. But they can work on those things and other problems with more motivation because of the win. If they had lost, we’d be talking about whether Harbaugh had lost control of the team and whether the Ravens would play hard for him for the remainder of the season.” —Mike Preston

Jackson juked and sprinted for 117 yards, Gus Edwards ran for 115 and the Baltimore Ravens ground out a 24-21 victory Sunday to end a three-game losing streak.

Flashing the moves that enabled him to win the 2016 Heisman Trophy at Louisville, Jackson zipped in and out of the pocket for 27 carries. Though the Ravens (5-5) relied heavily on the run, Jackson also completed 13 of 19 passes for 150 yards with an interception.

Down 21-13 in the second half, Baltimore rallied to hand the sinking Bengals (5-5) their fourth loss in five games.

Edwards, an undrafted rookie free agent, scored on an 11-yard run and barreled in for the conversion late in the third quarter. Jackson then directed a 55-yard drive that ended with a field goal by Justin Tucker with 8:12 remaining.

“My teammates had my backs, and I had theirs,” Jackson said.

Cincinnati’s Randy Bullock missed a potential tying 52-yard field goal with 3:59 left, and Andy Dalton‘s fourth-down pass from the Baltimore 37 with 1:42 to go was knocked away by Marlon Humphrey.

Jackson ran 10 times for 64 yards and five first downs , Alex Collins scored on a 7-yard run to cap the opening drive, and the Ravens took a 13-7 halftime lead when Tucker drilled a 56-yard field goal.

It all came apart for Baltimore in the third quarter. Jackson threw his first NFL interception , a pick by Shawn Williams, whose 22-yard return set up a 4-yard touchdown pass to tight end Matt Lengel for a 14-13 lead.

On the next series, Jackson was stuffed on a fourth-and-1 from the Baltimore 45. Dalton turned the gamble into a touchdown, hitting John Ross on the right side of the end zone for a 22-yard score.

But the Ravens rallied. The Ravens improved to 9-2 after a bye under Harbaugh, and they’re 14-3 since 2002 following an extra week off.

UP NEXT: A three-game homestand concludes for Baltimore this Sunday against the struggling Oakland Raiders.