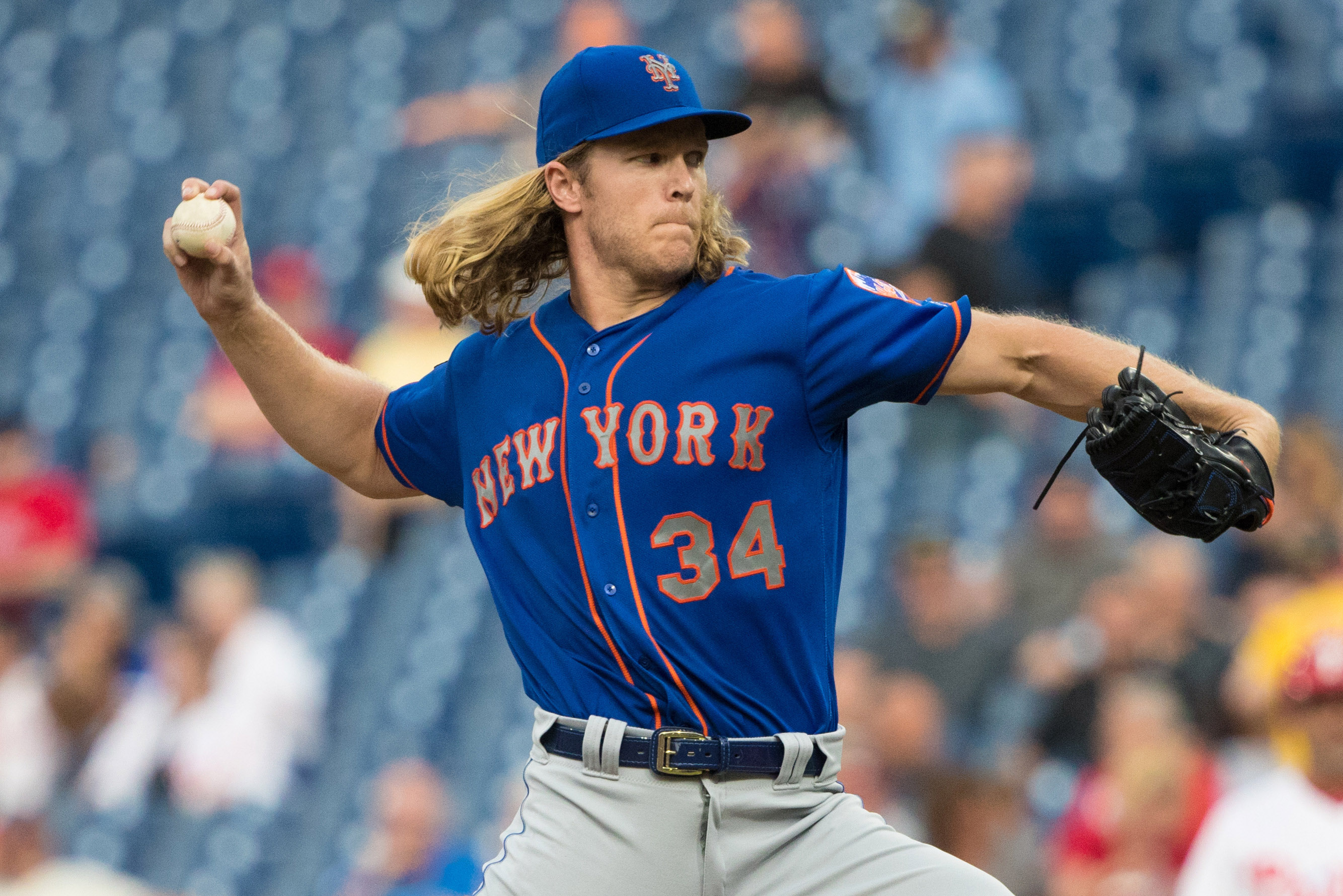 The Noah Syndergaard rumors are starting to pick up for the New York Mets, who are exploring their options to try and put together a contender in 2019. One of the more extreme options would involve dealing the 26 year old Syndergaard for pieces to help create a more balanced roster, and there has been some more smoke building over the weekend. Ken Rosenthal of The Athletic is reporting that a potential trade of Syndergaard wouldn’t necessarily involve the Mets simply collecting a bunch of prospects as the “end game”. This is an interesting update, so let’s take a look at how the Mets could treat the situation.

One potential option that Rosenthal lays out is for the Mets to try and acquire major leaguers in the trade to try and fill some of the team’s needs at catcher, center field, and the bullpen. The Mets could also take back a package of prospects in a deal and try and flip some of them to fill another need on their roster while signing a free agent starter to fill the gap for Syndergaard. Let’s play out one of these scenarios, and we’ll use the San Diego Padres as a trade partner since they have been the team most linked to Syndergaard. Here’s one hypothetical trade from San Diego, involving a collection of prospects.

In this scenario, the Mets land one of the best prospects in the sport in Tatis Jr, another one of the Padres’ top five prospects in Paddack, a top 30 prospect in Lawson, and someone in the lower levels with upside. The key to this haul would be adding Tatis Jr, who is projected to be big league ready this season and could either stay at shortstop or move to third base to accommodate Amed Rosario. Adding Tatis Jr would free the Mets to deal Andres Gimenez, their top prospect, to address another major need. Let’s construct the following trade in that scenario:

This trade would send Gimenez and Paddack to Miami as the headliners for Realmuto. Realmuto would give the Mets an immediate upgrade over anything they have behind the plate right now. Flipping Paddack would be necessary to complete the deal since he is higher rated than any of the Mets’ top pitching prospects, but the ability to solidify the catching situation is something the Mets couldn’t pass up.

In this scenario, the Mets have subtracted Syndergaard and Gimenez from the organization while gaining Tatis Jr and Realmuto on offense, which would be a help. At this point in our offseason, the Mets haven’t spent a dollar in free agency but have filled their catching hole and fortified their infield. Let’s throw another trade in before we do that.

This deal makes sense for both sides, with the players having similar salaries and in need of a change of scenery. Bruce can go back to playing a corner outfield spot in Colorado, where he can rejuvenate his offensive numbers, while Shaw will be reunited with his former Indians’ pitching coach, Mickey. Callaway. Now that this trade is in the books, let’s spend some money in free agency.

These four signings make sense for the Mets and won’t blow out the budget. Jones would need only a one or two year deal and allow the Mets to keep Brandon Nimmo and Michael Conforto in the outfield corners, boosting their defense while they wait for the return of Yoenis Cespedes. Britton and Robertson would need multi-year deals, but adding them and Shaw to the bullpen would really fortify the unit. Keuchel is your Syndergaard replacement, and while he is a downgrade at that spot the Mets would have some cost certainty in the rotation that wouldn’t exist as they go year to year through arbitration with their current starters.

After all of that maneuvering, here is what we have added and subtracted from the Mets.

The loss of Syndergaard would be painful and a downgrade to the rotation, but the Mets would be better in the bullpen, behind the plate, and have an impact young talent in the class of Ronald Acuna Jr waiting in the wings to join the big club a few weeks into the season. Add Peter Alonso to the mix and the Mets have a much more complete and well rounded roster than the one they possess now. This is just one possible avenue the Mets could explore, but using Syndergaard as a chip to address more than one set of needs is an intriguing strategy for GM Brodie Van Wagenen to explore.