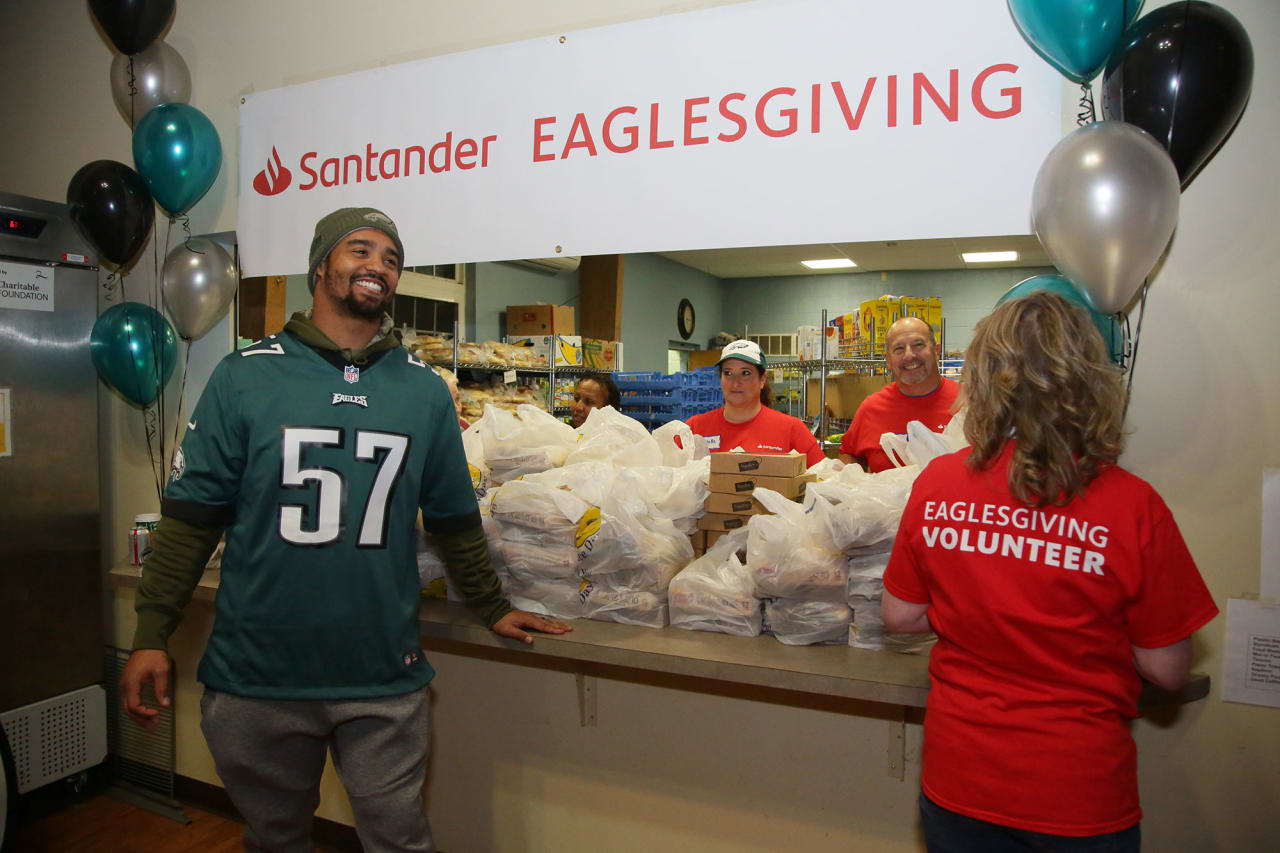 Win or lose, I am thankful for the currently stable ownership of the Eagles. I may not be in lockstep with Mr. Lurie’s politics or his Hollywood affiliations, but I dig his loyalty to his adopted city-state. Lurie grew up rooting for Boston/New England teams. Philly was like his second-choice “get” as an owner. But I am grateful for being reassured by his consistent actions as an owner that Lurie is committed to keeping the Eagles right here in Philly.

For you youngsters out there, this kind of stability was not always a foregone conclusion.

Jeffrey Lurie bought the Eagles on May 6, 1994 from then-owner Norman Braman for an estimated $185 million. The club is now estimated to be the 15th most valuable sports team, worth $1.94 billion, as valuated in 2017 by Forbes.

Braman had been this close to relocating the franchise to points west or south…as in, we ain’t got no team in Philly! Well, at least it was an implied threat.

Braman and his brother-in-law, Ed Leibowitz, became owners of the Philadelphia Eagles in April 1985, having acquired them from Leonard Tose for a reported $65 million. Initially, Braman owned 65% of the team while Leibowitz owned 35%. In July 1986, Braman bought out Leibowitz’s interest. During Braman’s ownership, the Eagles made playoff appearances in 1988, 1989, 1990 and 1992. They were NFC East division champions in 1988.

Braman was all about the money, see? Although born in 1932 in West Chester, Pennsylvania, and growing up in the Cobbs Creek section of Philadelphia, where his father owned a barbershop, Braman eventually outgrew his local love for a natural fan-base affiliation with the Eagles.

That’s because Braman went to Miami to make his big bucks.

Braman attended West Philadelphia High School and graduated from Temple University in 1955 with a degree in business administration.

He paid his dues, so to speak, in the Philly metro region. Braman began his post-collegiate career as a market research analyst for Seagram’s Distributors in 1955. A few years later he took an executive position at Bargaintown U.S.A. which he eventually acquired and turned into Keystone Stores, a chain of self-service variety stores in the Philadelphia area. In the mid-1960s he spearheaded the merger between his Keystone Stores business and Philadelphia Laboratories to create Philadelphia Pharmaceuticals and Cosmetics. Braman was appointed president and CEO of the new company. Acquisitions under his tenure at the company included Vitamix Pharmaceuticals, F.A. Martin and Company, and U.S. Cocoa Corporation.

But Braman was socially influenced and enticed by the warm and welcoming southern climate of Florida. Suddenly Philadelphia became passe to him.

He moved to Tampa and took his accumulated savings with him and bought his way into the burgeoning automobile dealership business in the fastest-growing state in the nation at the time. In 1972 he acquired controlling interest of Sharpe-Taylor Cadillac in Tampa, Florida. During these early years, Braman was mentored by well known car dealer and fellow Philadelphia native Victor Potamkin. In 1975, Braman bought the former Nolan Brown Cadillac in Miami, Florida. The following year, Braman took on his first import brands with the purchase of BMW and Rolls-Royce dealership C.R. Berry Motors and moved both franchises next to his Miami Cadillac dealership. By 1980, Braman had Cadillac, BMW, Rolls-Royce, Fiat, Lancia, and Toyota dealerships along the 2000 block of Biscayne Boulevard in Miami.

By then, Braman the successful adult had sort of lost his childhood loyalty to the Eagles as his hometown team. After all, the Dolphins were the next big thing in the NFL—and damn good for his business!

But when the opportunity came to buy the Eagles from the struggling owner Leonard Tose, Braman and his financial supporters jumped at it.

Leonard Tose had damn near moved the Eagles to Arizona. Can you imagine that? In 1984, a forgettable 6-9-1 Eagles season was interrupted by the unsettling news that financially strapped club owner Leonard Tose was considering selling a chunk of his team to Phoenix-based real-estate developer James Monaghan and – gulp – moving it to the Valley of the Sun. The Eagles in . . . Phoenix? That’s not just losing a team, not to a Philly community that bleeds green and silver. It would have been losing a cultural institution.

As panicked Philadelphians pondered the unfathomable possibility of losing their beloved football team, Tose assured them they had nothing to worry about. “The Eagles aren’t going anywhere,” he promised. “In the first place, I’m not going to sell the club. In the second place, even if I ever did, the only way they’d get them out of Philadelphia is over my dead body.”

Turned out that Tose, who died broke in 2003 at age 88, was lying through his capped teeth. Even as he spoke those words, he already had a handshake agreement with Monaghan to sell 25 percent of the club and move it to Phoenix. Even as he spoke those words, his daughter, club vice president Susan Fletcher, who once put a time clock in the club’s Veterans Stadium executive offices to make sure everyone was giving a full-day’s work for a full-day’s pay, was out in Phoenix looking at private schools for her daughter.

Ultimately, a couple of things ended up happening that convinced Tose to abort his plan to take the Eagles to Arizona. One was a lawsuit filed by the NFL that sought to prevent him from moving without a green light from the league’s other owners. The other was some impressive 11th-hour negotiating by then-mayor Wilson Goode to keep the Eagles in Philadelphia by restructuring the club’s stadium lease and building luxury boxes to increase the team’s revenue. Maybe, just maybe, Tose also might have had a small attack of conscience.

While the restructured stadium lease helped keep the Eagles in Philadelphia, it turned out to be too little too late to help Tose hang on to the team. Nearly $42 million in debt, he sold the team to Miami car dealer Norman Braman a few months later for $65 million, all of which went to his creditors or, eventually, the Atlantic City casinos.

“At the time, it seemed unthinkable to consider the NFL without the Eagles in Philadelphia,” Dan Rooney said. “I remember standing up at the emergency meeting we had after we learned Leonard Tose was thinking of taking his team to Phoenix and saying, ‘We can’t let them move. Philadelphia is too important to us. It’s where the country started.’ I said, ‘The Eagles are an institution there. We cannot let him go [to Arizona].’ Whether we really could have stopped him, though, I don’t know. Fortunately, he backed down and we never had to find out.”

Tose backed down because Norman Braman came up with the cash to buy him out. BUT— Braman came in with his own set of crazy problems.

Braman soon became known most notably for skimping payroll, hoarding cash, and letting Reggie White walk away. As much as Buddy Ryan was trying to build a winning culture, Braman was in effect doing everything to destroy it. He charged players for their socks, for example. Little nitpick shit like that…

For all his penny-pinching faults, Braman laid claim to his saving grace that he had saved the franchise from moving to Arizona. But truth be told, Braman and his advisors were working behind the scenes to potentially move the team to a new location (Orlando, Salt Lake City, Oklahoma City) unless they got a more favorable stadium lease deal from the City of Philadelphia.

At least, in Braman’s defense, the threatened move of the franchise was sheer gamesmanship. Norman was just doing what always worked for him in business—applying leverage. And it worked—up to a point. He achieved a 50-50 split of stadium maintenance expenses with the City in exchange for his promise to keep the team in Philly.

But the backlash he endured from Eagles fans became a deal-breaker. Thankfully he decided to sell the team. Even for Braman, enough was enough.

That’s where Jeff Lurie comes in. All the mouth-breathers who used call in to WIP complaining about Jeff Lurie should get their faces slapped. He got the team a real football stadium (50% city-state financed) and a world-class practice facility and a first-rate sports science department. He’s proactive in community involvement and public health projects. With him the Eagles are here to stay. And that’s something you could never say with certainty about Leonard Tose or Norman Braman.

For this (and many other things, including the brotherhood and friends on this site) I am extremely grateful. Happy Thanksgiving, friends and fellow fans.