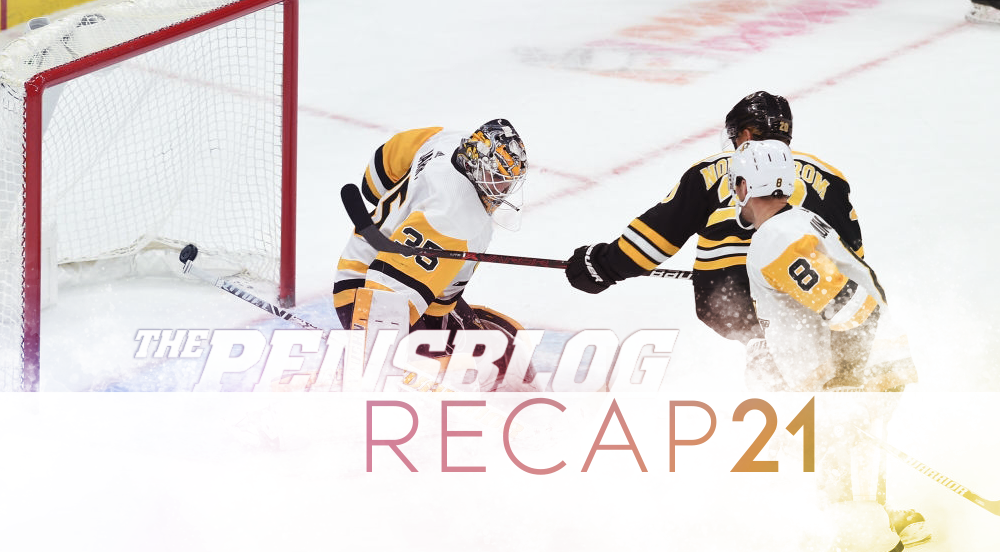 Yesterday, if having Thanksgiving dinner with your shitty uncle wasn’t enough to ruin your day, the Penguins announced Matt Murray would be placed on LTIR.

“This is something that he’s been dealing with for a couple of weeks. The decision was made this morning to rest and see if that gives him an opportunity to heal. That’s where we’re at.” – HCMS

Tristan Jarry was recalled on emergency basis from Wilkes Barre-Scranton and was announced as starter this morning.

The Bruins were without the services of Chara or Bergeron, both on IR with longer-term injuries.

Here's what the Penguins' line combos and defensive pairs will look like against Boston tonight.#LetsGoPens pic.twitter.com/NTZWysOuos

Sprong in, Grant out.

Looking to build on their momentum from their dismantling of the Stars, the Pens came out with a little hop in their step, owning the first couple of minutes. As expected, the game began to even out. Neither team seemed able to corral the puck or make a pass. Tristan Jarry did all he could to soothe the “should of kept Fleury” crowd by handling the puck like it was an active grenade.

The best chance of the first ten minutes went to the Bruins as Marchand found himself wide open following a feed from Pastranak. Jarry, beyond all logic and reason, made the save.

Despite a partial breakaway by Geno, the Bs would tilt the ice in their favor for the second half of the period. If it wasn’t for the backchecking efforts of Selke Candidate Phil Kessel, Boston would’ve had a 1-0 lead.

Jack Edwards on the Bruins' broadcast:

If you ever think Mears and Errey are brutal homers, go listen to a Hack Edwards broadcast. Dude might as well wear pom-poms in the booth.

The second period began where the first ended, with Boston tilting the ice in their favor. Jarry was up to the task. Krejci had the best chance as he walked right down Landsdown, but Jarry shut the door.

Five minutes in, the Penguins would get the break they needed. David Backes would head to the box for a trip and it was time for a #GenoBomb. Future Norris winner Kris Letang and future Selke winner Phil Kessel with the helpers.

After consulting with the Department of Defense, Evgeni Malkin’s one-timer has officially been classified as a weapon of mass destruction. 1-0 Guinos.

The power play tally seemed to wake up the Penguins as they started to look themselves following. Several good chances, but no dice.

Halak made several big saves, none bigger than a point blank shot from Kessel. About a minute later, Boston would even this bitch up. Jake DeBrusk with a bomb from the point found it’s way past Jarry. New game, one all.

Jarry should have that, but that little pick-n-roll screen in front was probably just enough for him to lose sight of it.

The Pens were not deterred, as they would get right back to work. A few good chances and zone time, especially by the third line.

The second break for the Pens came when we all collectively tweeted “Parallax effect!” when the B’s thought they took the lead, but the call on the ice was no goal and video review confirmed. I’m sure Jack Edwards was busy channelling his inner-Alex Jones and blaming the Deep State for favoring the Penguins as usual!

Pens owned the rest of the period. Halak stood up.

Win the third, win the game.

The third opened with a couple Bruins chances, but just under two minutes in, Jarry would flash the glove.

Boston tried to make the game physical, as Boston teams are apt to do, but these are Mike Sullivan’s Penguins, not Dan Bylsma’s. We don’t do that shit anymore. Wagner, who apparently is an NHL player, tried to slew-foot Letang, to Letang’s credit he largely ignored it. We pressed on.

To the surprise of no one, Jack Johnson would get walked twice in about three minutes. We will not be harping on this much more. He sucks. We all know it.

The Penguins kept the pressure up most of the period and it was rewarded, sort of…the Bs sent the puck over the glass for the dumbest penalty in hockey (until it favors you). Unfortunately, nothing doing on the power play.

The goaltenders would shine the second half of the third frame. Ten-bell saves from both Halak and Jarry.

It was all Penguins to start OT. Dumoulin knocked down Krejci, but Boston kept control. Nordstrom deflected home shot from Krug. Ball game.

-Penguins really have to get to getting on the breakout. Obviously HCMS said they are working to simplify it, but too many hope passes are being made. Regardless of whomst they have in the net, if you’re spending extended stretches in your own end, life is going to be hell for the goaltender.

-Daniel Sprong (yeah, I’m critiquing him again!) is struggling with the transition from the AHL to the NHL. That split second is apparent. In the first period, Sprong had a grade A look at the net and waited a second too long to shoot. Down in Wilkes, he likely looks up and snipes, in the big show, get it to the net.

-Third line of ZAR-Brassard-Simon might have something. Spent a lot of time on the forecheck tonight.

-I said it on Dying Alive and I said it on Twitter; so many of the Penguins issues during their slump this month was mental. When teams pushed back on them, they had the body language of “here we go again.” The Dallas game helped quell that. It was evident tonight. Boston, specifically Halak, didn’t back down. The Pens didn’t either.

-Great outing for Jarry, despite the loss.