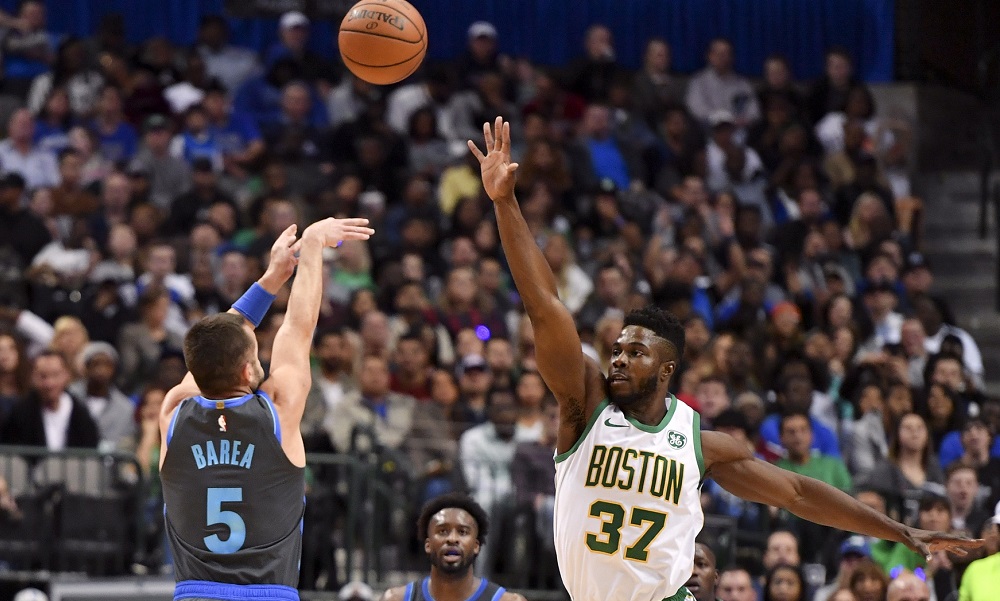 The Mavericks have a tricky, clever, deadly-shooting guard who torched the Celtics tonight in Dallas, and he was absolutely the difference in propelling the Mavs to a 113-104 win.

Oh, you thought it was super-rookie Luka Doncic. No. We’re talking about J.J. Barea, a 6-foot-nothing, 34-year-old guard who wouldn’t scare anyone if he walked onto a court at your local playground. But he killed the Cs with 20 points (double his season average) on 9-16 shooting (several of them daggers) with eight assists.

It was a chippy game all night, with Barea and Terry Rozier banging into each other repeatedly in the first half to set the tone. And Barea, infuriatingly, had the last word. His performance continued the pattern of opposing players like Jamal Murray, Trey Burke and Kemba Walker dropping huge numbers on the Cs.

For the Celts, Al Horford was back from resting his knee, and replaced Aron Baynes in the starting five. Gordon Hayward didn’t play due to ankle soreness on the back-to-back.

Marcus Smart had 19 points and played extremely hard in his first game near where he grew up since his mom passed away. (But … he was probably the most frustrated Celtic at how this one played out. In the final minute, he was hit with a technical for shoving a Mavs player after they banged together.)

Dallas hit their first seven three-pointers to build an early lead that they held nearly for all 48 minutes.

The Celtics held the lead only once all night, on a Tatum dunk with 5:26 left in the third quarter. Dallas regained the lead and held Boston at arm’s length until pulling away in the final minutes of the fourth.

Kyrie Irving had 19 points and six assists, but shot poorly (9-24, 0-5 on threes) and resorted to hero ball much of the time. Like Smart, Kyrie was visibly frustrated.

Late in the game, Jaylen Brown landed hard on his tailbone and had to go to the locker room. Don’t be surprised if he’s out for a while.

The Celtics are now 0-2 when wearing their new City Edition uniforms.

DeAndre Jordan was charged with two technical fouls but not ejected. The second one was for hanging on the rim, which apparently doesn’t count the same as a T for arguing or other bad conduct.

Two bizarre plays happened where the Celtics got a bad whistle:

First was when Doncic ran up the court and, instead of watching where he was going, stared down Kyrie for some reason. Except he ran straight into Jaylen and got floored. Jaylen was T’d up, apparently for not moving aside.

Second was a Mavs shot bouncing up along the top of the backboard and then falling over behind it. The refs called nothing, and of course Dallas got it back and hit a three.

How the hell do the officials miss the ball obviously going over the top of the backboard. Everyone just stopped playing & the whistle never blew. That's as obvious as it gets

Uncle Drew with the left! pic.twitter.com/6SAyVwB46M

Kyrie with the court vision 👁 pic.twitter.com/dLZP7j4tKT