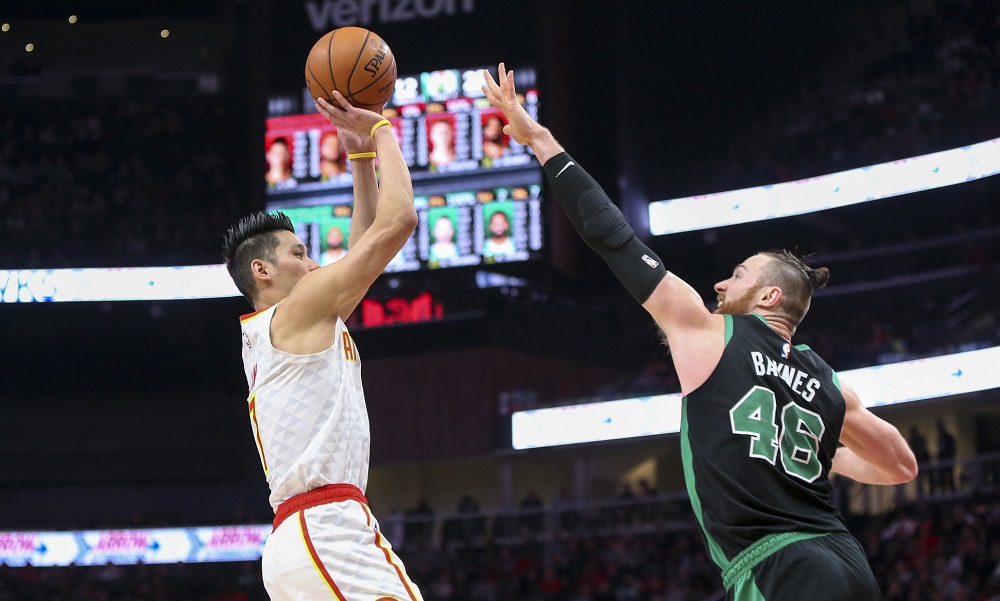 The Celtics desperately needed to make a statement; not to the Hawks but to themselves. They have been a sputtering bunch for weeks and getting off to a strong beginning to one of the worst teams in the NBA, was exactly what they did in scoring 45 points which ranks among the highest scoring first quarters in Celtics history. That kind of early dominance set the tone for the rest of the game which was never really much in doubt afterward.

Sure, one might question how much meaning can be applied to a triumph over the now 3-16 Atlantans, who got just five points from prized rookie Trae Young. But, hey, the Celts had just had their lunch eaten by a Knicks outfit that arrived at the Garden with a 4-14 record.

In other words, they weren’t about to look an easy win in the mouth.

It was, for all intents and purposes, a first round knockout.

The Celtics had a 7-5 lead three minutes in. Then they bid the Hawks adieu.

With Kyrie Irving being aggressive from the get-go, the C’s pulled away quickly. It took fewer than nine minutes to lead by 20, and by the end of the opening period they had a 45-23 advantage.

It was easily their highest first quarter of the season (34 at Denver) and best period overall (40 twice — in the second quarter at Oklahoma City and the fourth on Wednesday against the Knicks when New York had 33 to keep their edge secure).

Herald: Celtics finally get back in black by routing Hawks

Boston was indeed in control all the way last night. In a reversal of Wednesday’s Knicks game, Boston led by as many as 29 and never trailed at any time. Their first quarter was amazing: 16 of 25 shooting, including a scorching 8 of 12 on threes. They had 12 assists in the period, too, and served notice that they weren’t going to underachieve again.

The Celtics finished the game making 42 of 91 shots for 46.2%, their fifth-best shooting performance of the season, and much better than their overall average of 43.5%. Stop me if you’ve heard this, but advanced analytics have consistently determined that it’s easier to win when your shots go down.

Not that they were sharp for the full 48. In the second quarter, they inexplicably hit just 4 of 18 from the field and allowed Atlanta to crawl within 16 at halftime. But that’s as close as the Hawks got all night.

So it was not a great win, but it was a comfortable win, which put the Cs back above .500 at 10-9. Coincidentally, that’s the same record as New Orleans, which lost last night to the Knicks, which might make you feel a tiny bit better about last Wednesday.

As a bonus to the one-sided contest, every Celtic got playing time and also scored. Best of all, the Timelord played nine minutes and had two dunks in two tries, which brought his perfect season totals to four shots, four baskets, four dunks, and one awesome tweet about all of that.

100% of Robert Williams' FGs this season have been dunks 💪 pic.twitter.com/81VKaHBSFV

With another game tonight at Dallas, the Cs will be tested again. The effort that they put forth in Atlanta will only matter if they continue it.

But the Celtics did not cure any of their biggest problems on Friday night. Their consistency woes can only truly be solved with sustained multi-game effort. They still have not given a full 48-minute performance but they can at least build off Friday’s showing when they visit Dallas on Saturday.

“Did what we were supposed to do,” Irving told reporters in Atlanta after finishing with 13 points. “Start of a business trip.”

But how can Boston build off this?

“Just not being complacent, not being satisfied,” added Irving.

NBC Sports Boston: Here’s what happened in the Celtics’ 114-96 win over the Hawks  |  Celtics erupt for historic 45-point first quarter against Hawks

A source with intimate knowledge of the inner workings of the NBA told Get More Sports that Davis is considering five teams in the near and distant future: The Boston Celtics, Los Angeles Lakers, New Orleans Pelicans, New York Knicks and Philadelphia 76ers.

The determining factor in the short term will be the level of success the Pelicans do or do not have during the first half of the upcoming 2018-19 season. If they are middle-of-the-pack or worse in the competitive Western Conference, it is more likely than not that Davis will be moved before the trading deadline.

_ BOSTON CELTICS (Even money):  Ainge has more talent on the roster right now than he knows what to do with, and there is a glut of young talent that could be moved. Because of salary cap rules, one big money player would have to be included, and that would likely necessitate putting Marcus Smart’s $11 million (this season) deal into a deal if Al Horford ($29M) and Gordon Hayward ($20M) were not included. Trade candidates would likely include Jaylen Brown and Terry Rozier, and Ainge is sitting on four first-round picks in the 2019 draft: Boston’s own, Sacramento’s (Top 1 protected), Memphis’ (protected 1-8 in ’19; 1-6 in ’20 and unprotected in ’21) and the Clippers (protected Top 14 in ’19 and ’20).

Get More Sports.com: Sheridan: Anthony Davis to Lakers a big possibility, but Celtics in the mix, too

This report is flawed because it fails to consider what Dangercart, Celtics Twitter’s resident salary cap expert, explained weeks ago:

No, it's against the rules to have Kyrie on his current contract and add Davis via trade because they both signed Rose Rule eligible extensions

And as Chris Forsberg explained on last night’s pregame show, the only way the Celts could deal for Davis before the summer is if they sent Kyrie to New Orleans (watch video).

That was one report, then there was this…

After marveling at Vince Carter's longevity this morning, Kyrie Irving was asked if he could envision himself playing that long.

Keep in mind, Kyrie entered the league at age 19, and this is his eighth season. If he plays until age 34, that would be another eight seasons. So let’s not worry about it yet.

And, finally… Three views of sorcery

who did it better @KyrieIrving or @michaeljackson pic.twitter.com/BfK9d9s3JQ

this dude is not human 🤯 pic.twitter.com/E3nKTlqq0l