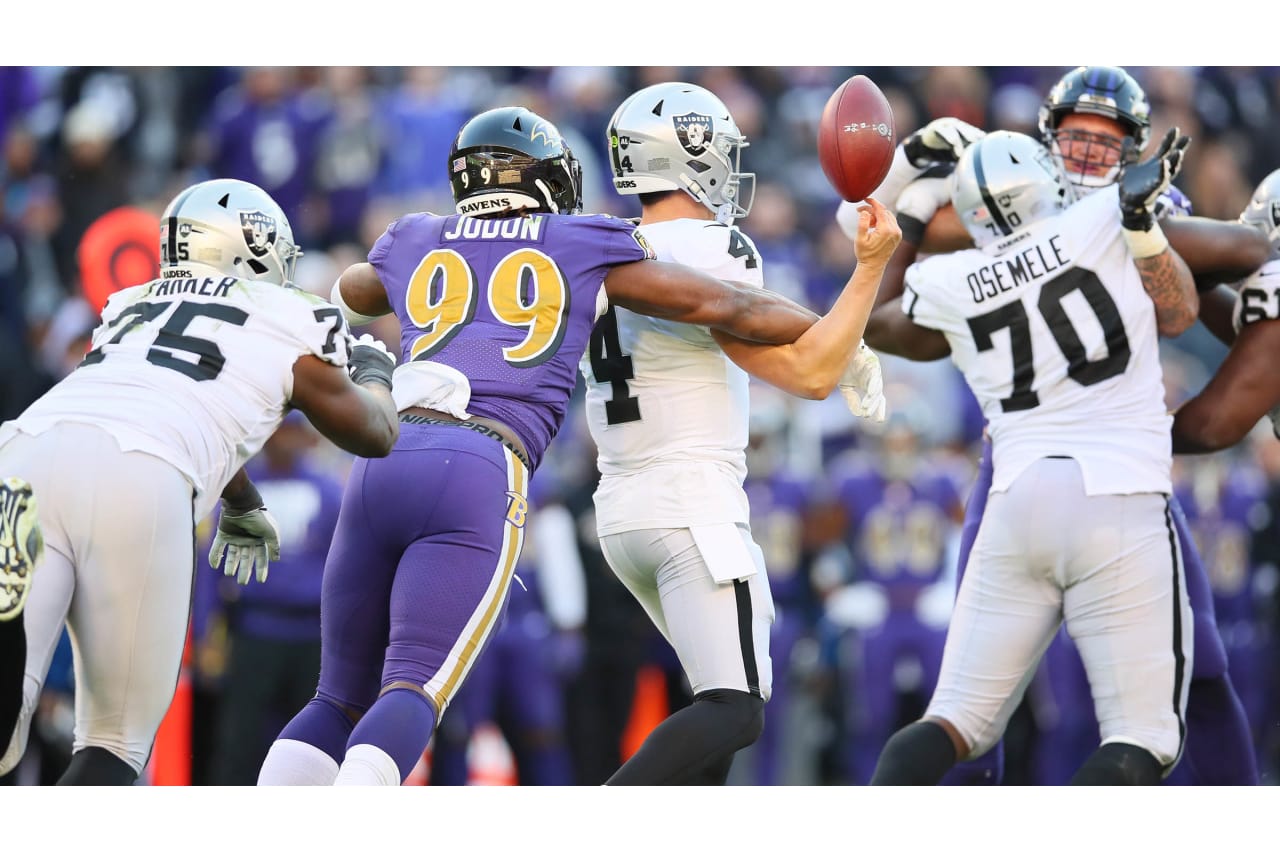 Quick fix or long-term solution for the Ravens offense? They changed their offensive scheme to incorporate rookie backup QB Lamar Jackson while Joe Flacco’s hip heals. The changes are working better than expected, although they have not been challenged yet by a Top 10 defense.

Lamar Jackson proved in the first half that he was capable of throwing the football as well as running with it. After that, the Baltimore Ravens rookie quarterback got back to what he does best — much to the delight of his offensive line.

Terrell Suggs returned a fumble 43 yards for a score and Cyrus Jones took a punt 70 yards for a touchdown to help Baltimore (6-5) win a second straight game for the first time since September.

Gus Edwards rushed for 118 yards as part of an effective ground game that enabled Jackson to pass just enough to keep the Raiders off guard — and off the field. Baltimore expanded a three-point halftime lead to 27-17 with two run-heavy touchdown drives that consumed a total of nearly 16 minutes.

“To have those long drives and have the running game going the way it went was probably the key to the game,” coach John Harbaugh said. “It was exactly what we talked about at halftime. We felt like we needed to do that. We felt like we could do it. The offensive line was very much in favor of doing that.”

With starter Joe Flacco out for a second straight game with an injured right hip, Jackson cut down on his rushing attempts, threw more often and got the same result — a victory.

After carrying 27 times for 117 yards last week in his NFL starting debut, Jackson ran 11 times against Oakland (nine times in the second half) and threw only seven passes after halftime, finishing 14 for 25 for 178 yards with a touchdown and two interceptions.

“Threw two interceptions,” Jackson lamented. “One more than last week, so I was a little bit ticked off.”

Known primarily for his ability to run, Jackson proved to be a dual threat.

“Just because you can run with the ball, doesn’t mean you can’t throw,” Harbaugh said.

The question now is, if Flacco is healthy next week, who starts against Atlanta?

“I’m not going to get into that for a lot of reasons,” Harbaugh said. “If the decision has been made or not, it is not important for anybody to know but us.”

Suggs clinched it with 5:55 left, lumbering down the right sideline after Oakland’s Derek Carr was sacked by Matthew Judon and lost the ball on a fourth-down play.

“It seemed like it took me forever to get there,” said the 36-year-old Suggs, who gripped the ball most of the way with his right hand.

Carr completed 16 of 34 passes for 194 yards and a touchdown but was sacked three times.

The Raiders (2-9) came in with the league’s 31st-ranked running defense, and the Ravens exploited that weakness for 242 yards rushing on 43 attempts.

“They didn’t make it real complicated,” Oakland coach Jon Gruden said. “You have to stop the inside run or you have no chance to stop everything else.”

Baltimore opened the third quarter with a 13-play drive that consumed nearly seven minutes and featured 12 running plays, including a 5-yard touchdown by Jackson that made it 20-10.

Carr matched that touchdown by using the opposite approach, passing to Seth Roberts for 44 yards to set up a 16-yard scoring toss to tight end Jared Cook.

Jackson then orchestrated a 17-play march that covered 71 yards and lasted 8 minutes, 53 seconds. On third-and-goal from the 8, Jackson zipped a TD pass to former Oakland star Michael Crabtree .

“They took over the game,” Gruden said. “Credit to them.”

The Ravens’ only touchdown before halftime came on Jones’ second-quarter punt return.

Jones tiptoed down the right sideline and went the distance, getting key blocks from Chris Moore and Judon. It was the first career touchdown for Jones, who was released by New England in October.

Gus “The Bus” Edwards topped 100 yards for the second straight week and may have claimed the Ravens’ lead running back role in the process as Baltimore has found its stride with a ground-and-pound rushing attack.

The undrafted rookie had 118 yards on 23 carries and once again showed his good feet, powerful downhill style and tackle-breaking ability. It’s the first time a Ravens running back has topped 100 yards in back-to-back games since Justin Forsett did so in three straight contests in 2014.

“I think Gus has realized that he has a great opportunity, and when you’re a young guy, you want to make the most of it,” center Matt Skura said. “You want to play as hard and physical as you can.”

Raiders: Backup DE Jacquies Smith left with an Achilles injury and did not return. … DT Maurice Hurst left in the third quarter with an undisclosed injury.

Ravens: SS Tony Jefferson twisted his left ankle in the second quarter, returned briefly and left for good. … RB Alex Collins (foot) was inactive after starting every game this season. … OL Alex Lewis and G Marshal Yanda both underwent concussion protocol in the second half and were cleared.