Wizards show off potential in needed win over Pelicans 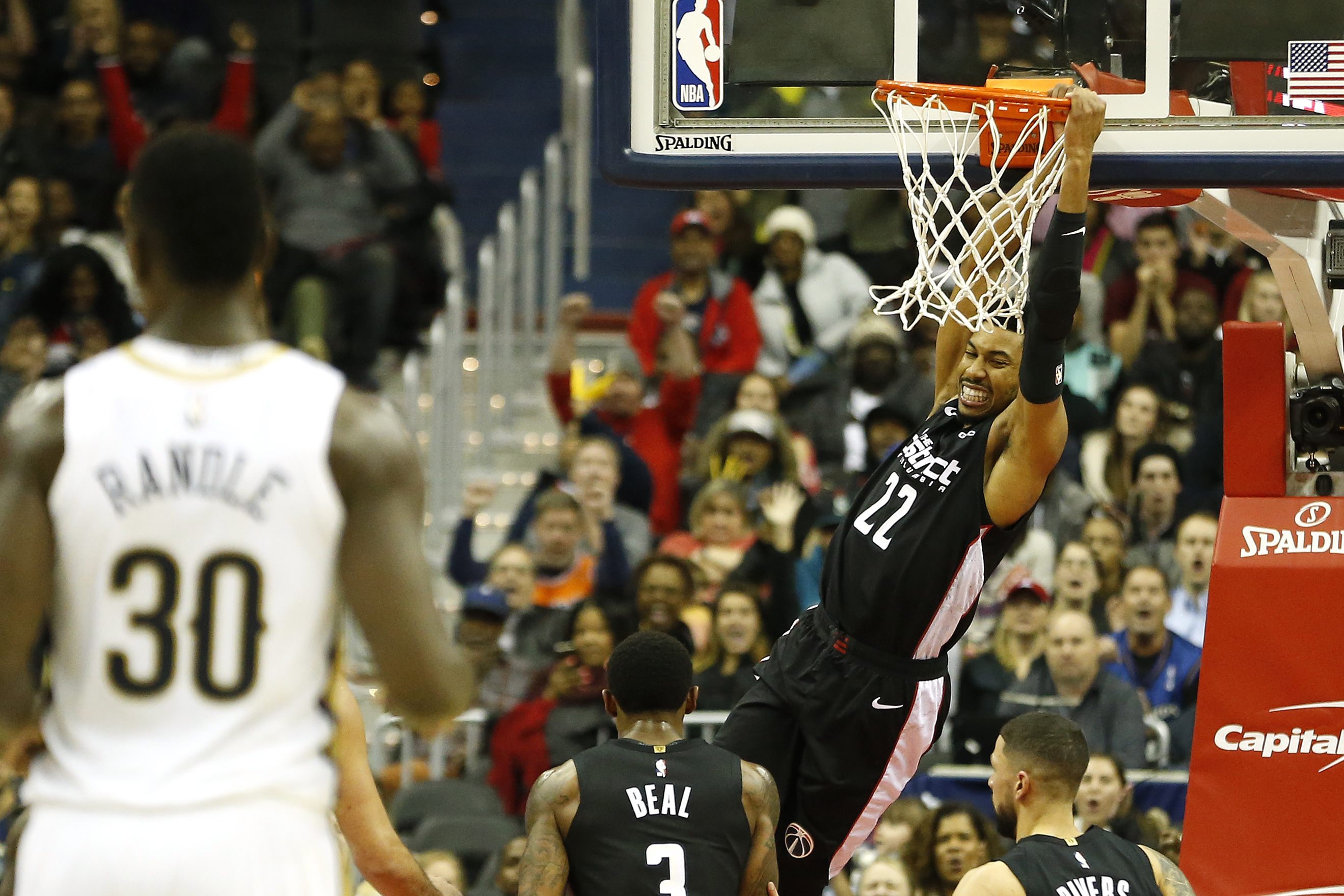 Wizards show off potential in needed win over Pelicans

Playing on the second night of a back-to-back is tough, especially when you are a struggling team falling well short of expectations. Somehow, the Washington Wizards were able to put that behind them and get a good win against a New Orleans Pelicans squad. Granted, the Pelicans were also on the second night of a back-to-back and without MVP contender Anthony Davis, but for a team struggling to find consistency, Washington will take wins any way they can take them. The Wizards fell behind the 2-8 start from two seasons ago, but are not back ahead as they improved to 7-12 after being 7-13 in Scott Brooks’ first season in D.C.

I do not think Otto Porter is worthy of a max contract, but the Wizards were in a situation where they had just won 49-games and were a few plays away from the Eastern Conference Finals so how can you let your third best player walk in the offseason for nothing? They were essentially in a no-win situation. His contract becomes much worse when he is only averaging 11 points per game 18 games into the season, which is less than his backup (Kelly Oubre – 12.1 points per game). Putting all of that aside, Porter had his best game of the season and was a big reason for Washington escaping Saturday night with a victory. He had 16 points on 6-of-7 shooting in the first quarter alone and finished the game with 29 points on 12-of-15 shooting including 3-of-4 from deep to go along with seven rebounds, four assists, and two steals. He was Mr. Efficiency and when playing with two All-Stars, that is what the Wizards need. Porter is not going to play like this every night, but when he does, he is probably worth that $26 million he is making this season.

“He was active,” Brooks assessed. “His hands were good, just on the defensive end, getting deflections and taking the challenge. He’s playing the four, so I think it’s something that he has to continue to adjust and play through, but I think it’s actually going to help him — especially with the league being so small. Fours are not the power forwards anymore. They are the shooting fours, they are the slip fours, they don’t really set screens. I think it helps him, and he still rebounds. A couple games ago, I think he had 14 rebounds and tonight he had seven. It gives him a lot of opportunities for shots, because teams have trouble switching on John [Wall] and Brad [Beal], and if they do, he gets wide-open shots.”

“Just spacing and ball movement,” Porter humbly attributed his strong game. “We played side to side and were able to get [the New Orleans Pelicans] scrambling, attack the paint. The way they play defensively is with everyone in the paint, so we had a lot of kick-out for open threes. … The way we’ve been playing. We’ve been getting up and down the court and spreading the ball, and just attacking the rim. John [Wall] and Brad [Beal] do a good job of attacking the rim, so guys are open on the outside and we’re getting good looks. Now they’re starting to fall.”

John Wall on Otto Porter: "For him, it's all about seeing his first couple shots go in. … Whenever he's making three's it gets his game going. … It's better for our team cause he's another scorer for us, but also he can put the ball on the floor and make plays ."

Otto Porter was playing with a heavy heart against the Pelicans and balled out 🙏 pic.twitter.com/HKJQPCmcJn

When Markieff Morris was benched in favor of Kelly Oubre, many probably took it as Scott Brooks disciplining him for poor play to begin this season and that is most likely a big reason for the lineup change. It may be playing into the Wizards’ favor now because Morris is a borderline starting talent now playing with and against backups that he can take advantage of. The power forward had 15 points on 6-of-12 shooting and nine rebounds in 28 minutes of play, indicative of him still being able to play near starters minutes. Along with Morris taking advantage of playing with the second unit, Austin Rivers is slowly starting to come into his own. The trade acquisition had 18 points on extremely efficient 8-of-11 shooting, all of his misses coming from deep, to compliment stellar defense in the second half. As long as Dwight Howard remains sidelined with his gluteal soreness, Brooks is only playing four guys off the bench and if Rivers and Morris continue to be solid, that goes a long way to having at least an average bench unit. Couple that with guys that know how to do their jobs as professionals in Tomas Satoransky and Jeff Green and Washington may just sure up their weakest link over the past few seasons.

“I thought he was great,” Brooks said about Morris. “He has actually been a true pro, when I had my conversation with him that he was going to come off the bench and be our sixth man. And he’s played well. He’s made some shots, he’s rebounding the ball. Tonight was a great example of when he plays well, we are hard to beat. He’s a matchup problem. They had some smaller guys on him, he took them down low. They had some bigger guys, he popped and shot the three. … I think it actually helps us that we have a really good player in Markieff (Morris) that has been a starter. He has been a 14, 15-point starter, so it gives him opportunities to solidify that second unit. He has a stable presence. He doesn’t get too high, or too down and he can make shots. I think now he is starting to feel comfortable with his three.”

“Keef has been playing well, knocking down shots, going into the post and Austin [Rivers] just the way we try to tell him to play every game,” Wall said. “Just be aggressive and get down here and try to get to the basket, and he did that.”

“They brought energy. The bench kept the game where we wanted it. They were able to take the lead and make some good stops. They played great.” Porter summarized.

Otto Porter credits Austin Rivers for having a "great game" and Markieff Morris for giving the bench "another weapon." pic.twitter.com/wlb8GKZvvZ

“He’s finding his rhythm, he’s getting touches and playing his hardest like he always does,” Oubre said about Morris. “Keef is a very tough soldier, so whenever he’s not playing at his best it might mean something, but he’s one of the toughest people I’ve ever played with and against. So, I’m just happy he’s on my side.”

Kelly Oubre on Markieff Morris with the bench: "I think he's just finding his rhythm. … Keef is a very tough soldier. … He's one of toughest people I've ever played with and against. I'm just happy he's in my side." pic.twitter.com/gszwcL120I

Still all about defense

In the Scott Brooks era, the offense has rarely been the reason for the Wizards’ shortcomings. They have the talent and scheme to score with the best of them and showed that on Saturday night. But, it was not until the second half when they were able to pull away from the Pelicans because of defense. After giving up 68 points to New Orleans in the first half, Washington held the road team to just 46 points in the second half. Bradley Beal echoed the importance of defense after the game.

“We just did what we needed to do, and it was all on the defensive end – that’s where it came from,” Beal explained. “Our shots were equal and we put up a nice amount of points, but our defense is what won us the game. We accepted the challenge of guarding them and taking away the three-point line – and they made a lot of them tonight, still. It was our defense that won us the game. … It’s not offense, it’s defense. I’m just going to keep saying that. It’s not offense – we’re scoring points, we have plenty of assists. For everyone saying offense, we have it. It’s getting stops and guarding our guy. That was a lot better tonight than it has been.”

Bradley Beal reiterates it is always about defense: "It's not offense, it's defense. … We're scoring points, plenty of assists, whatever you want to say on offense, we have it. It's getting stops, guarding our guy, it was a lot better today." pic.twitter.com/4IZookqlFE

“We were just more aggressive [and] better on our switches,” Wall explained about the improved defense after halftime. “We did a better job of finishing plays and getting rebounds and getting out in transition.”

“The intensity,” Oubre figured about the defense after intermission. “They threw the first punch and we withstood that and we started punching back and we punched for a little bit longer.”

Next Game: Washington will be back at it on Monday against the Houston Rockets.