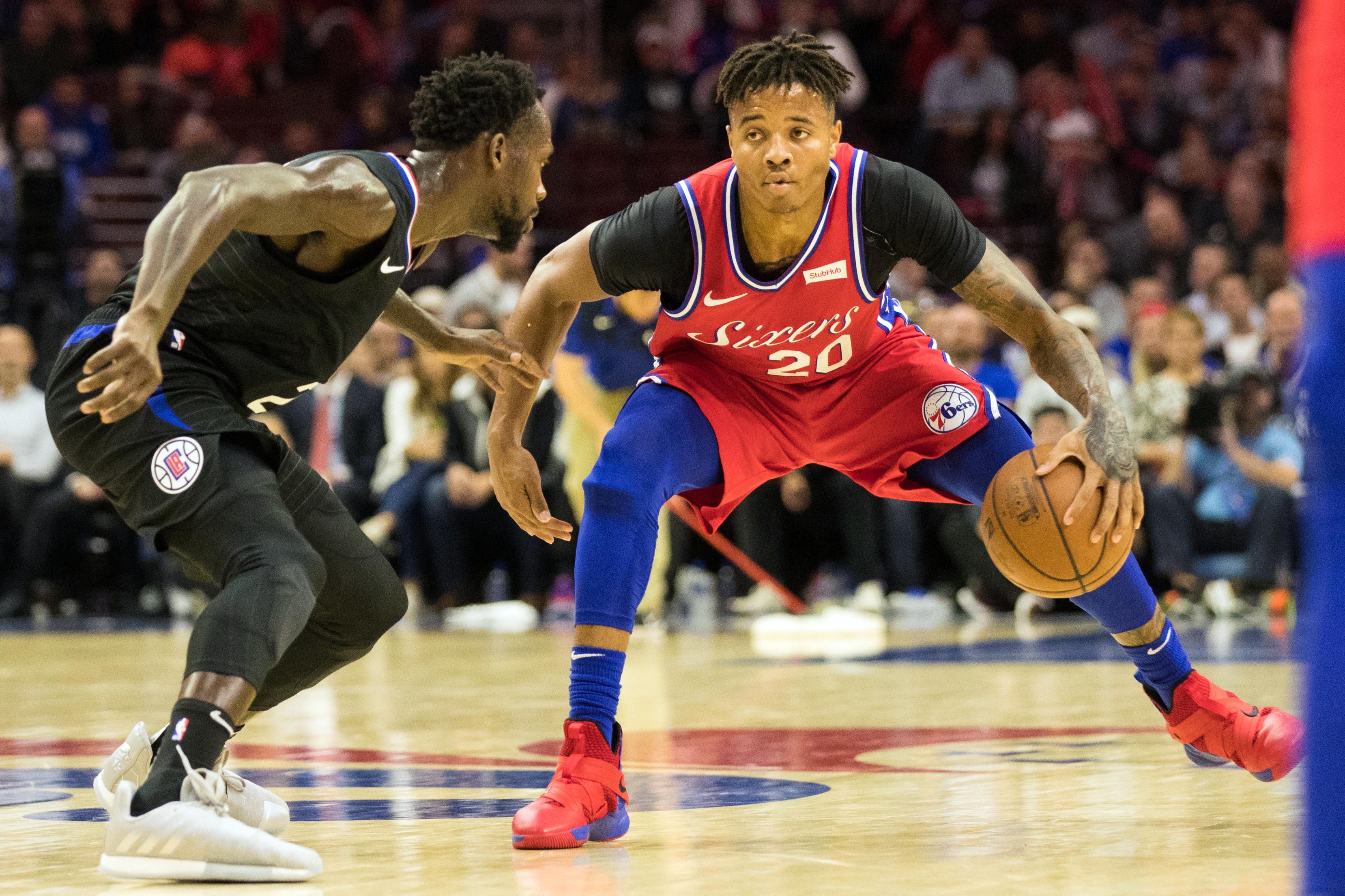 According to ESPN’s Bobby Marks, the Philadelphia 76ers could be looking to ship away former #1 overall draft pick Markelle Fultz. He reasoned that the 76ers could come close to having enough money this offseason to acquire another star, but only if Fultz is moved.

Surely, tons of teams would have interest in acquiring Fultz. But, what exactly is his trade value? How do you gauge a consensus top draft prospect who has started his NBA career with poor play, injury and mystery?

Let’s start by remembering who Fultz was as a prospect, considering he is only 33 games into his NBA career. Are you wondering what some of his draft comparisons were?

Not bad, not bad at all. Not only did Fultz draw these comparisons, but he graded out extremely high. Many projected him as a 3-level scorer who played unselfish basketball and could compete on defense too. What is my point? Fultz’s ceiling was remarkably high, and that potential could still lie dormant within him somewhere.

That was the good, now get ready for the bad.

Fultz has revealed two major red flags so far. His shoulder injury was handled with the oddest of circumstances and is always rumored to be back. Also, from the casual fan point of view, Fultz seems to have some problems with his mental approach to the game, or his personal life away from it.

Remembering the D’Angelo Russell comparison should help us out here. The two have a similar playing style, tantalizing upide, and a tendency to let people down. Yet, Russell was traded for by the Brooklyn Nets early into his career. At the time Russell was traded, he had underwhelmed in regards to on-court play but showed flashes of why he was an early draft pick. Plus, Russell experienced his own fair share of off-court problems.

What did Russell get traded for? The Lakers received Brook Lopez and a late first which went on to become Kyle Kuzma. They also got to unload a big contract in Timofey Mozgov.

Could Fultz get the same haul for Philadelphia? I am still high on Fultz’s long term potential, and would gamble on his upside by offering a decent package. Yet, GMs around the league may value Fultz lower than I do, as teams often expect immediate results and push for the playoffs even when that goal seems unreachable. It doesn’t help that Fultz’s numbers through 33 games look like this…

So here is what I am (tentatively) going with for his trade value. The Sixers should at least get back: a starter, a prospect/late round 1st, and no bad contracts. Is this doable? Let’s throw around some theoretical trade ideas?

Cleveland doubles down on its rebuild

Sam Amico has reported that the Cleveland Cavaliers have expressed interest in obtaining Fultz.

What would a trade package look like? Kyle Korver, who has played in Philadelphia before, would be a natural fit next to the playmakers currently on the Sixers. Despite being in his late-30s and lacking in athleticism, he plays smart defense and can space the floor. Although Korver would not fulfill the starter requirement of the outlined trade value requirement, he is a 25-minutes-a-night guy with loads of playoff experience.

Cleveland would also have to throw in a lottery protected first round pick. In fact, with the way Fultz’s trade value is trending, I would not be surprised if the pick eventually conveyed into two second rounders. There is another option, however.

Cleveland could send over JR Smith and Cedi Osman in addition to a protected first. JR is a capable shooter who is only guaranteed $3.8 million next season, if waived. Osman is a decent asset in return and has taken a step forward for the Cavs this year. The issue? Philadelphia may not want any salary on the books for next year if they trade Fultz.

Remember when we all laughed at the Pacers for the haul they got in the Paul George trade…?

Indiana may benefit from using this tactic again. This time, however, they would be acquiring Fultz. The Pacers have three point guards on the roster already in Aaron Holiday, Darren Collison and Cory Joseph. Joseph and Collison have shown they can play at least 25 minutes per game, and Holiday has looked intriguing lately.

Philadelphia could have their pick between Joseph and Collison. Collison is on an expiring $10 million deal, around $2 million more than Cory Jo. Yet, Joseph may actually be playing better than Collison this year and is also on an expiring contract.  Decide for yourself which one the Sixers would prefer. Remember, both are decent defenders and can spend time off the ball.

This trade makes sense for the Pacers. Collison and Joseph may bolt next year. Fultz has a higher ceiling than either Holiday, Joseph or Collison, and with the opportunity to land top talent being rare in the NBA, gambling on Fultz could be worth it. If he hits, then the Pacers have a deadly backcourt for years to come. If you’re the Pacers, what are the odds you land another big name star in free agency this summer? Slim. Although risky, Fultz is the best bet at obtaining a guy with star potential.

The Sixers would get a capable defensive guard who can also play off the ball. Plus, they would be on an expiring contract.

Remember when nobody thought UConn women would lose and then they were upset in the Final Four? And then all of Connecticut let out one collective tear (P.S. I am from Connecticut and currently crying.) Well the San Antonio Spurs are in 12th place and I don’t know how to work through the feelings I am having.

Don’t get me wrong, the West will not look like it currently does when the regular season finally ends. The Spurs can certainly make the playoffs and I would not bet against them. But, their ceiling is lower than ever before and an NBA Finals, or even Western Conference Finals appearance, is no longer the expectation.

The Spurs have some appealing young assets, but they aren’t particularly overwhelming in this area. Dejounte Murray is one of the best defensive players in the league, but leaves a lot to be desired on the offensive end. Jakob Poeltl projects somewhere between starting big and first big off the bench. I am still very high on Lonnie Walker, but he probably won’t be a meaningful contributor this year.

Adding Fultz to this core immediately raises the Spurs asset profile and gives them another significant throw at the dart board. Considering the Spurs knack for player development, gambling on Fultz seems like a smart move. Additionally, renowned shooting coach Chip Engelland could do wonders for Fultz.

So what would the Sixers receive? They could get back Bryn Forbes, Marco Belinelli and a future first. Belinelli could be a snag here. He is due $5.8 million next season, which is not what Philly is looking for. Perhaps he could be stretched if need be. Forbes is the key, however.

The 3rd year, undrafted product from Michigan State is lighting it up offensively for the Spurs. As their starting point guard, he is putting up 13, 2 and 2 and shooting a blazing 45 percent on 3-pointers on 5.1 attempts per game. He can play off the ball too, as he spends 30 percent of his time at the two-guard spot and hits 45 percent of his 3.5 catch and shoot triples per game.

The Spurs would love to get their hands on Fultz, presumably. Is Forbes, Belinelli and a future pick enough? Who knows. Perhaps they would have to surrender more picks or other assets.

The Suns have a solid young core. Devin Booker does Devin Booker things. DeAndre Ayton looks to be a franchise center. Mikal Bridges will be a future contributor and TJ Warren has taken a step forward in his game.

Still, they lack a starting caliber point guard. Many think Elie Okobo could be that guy, and if you recall, I was very high on the Frenchman. No one knows what Okobo will be, however. Same goes for Fultz. If that is the case, then I would rather roll the dice on Fultz.

Phoenix can send a package of Dragan Bender and Okobo to Phoenix as well as the first round pick the Milwaukee Bucks owe them this summer. Dragan is a $4.6 million expiring contract and Okobo will only cost $1.4 million next year. If Philly really needs to, they could always trade Okobo into a team with cap space; there would be plenty of buyers.

Here is what I am concerned about. Is Okobo a strong enough prospect to interest the Sixers? Would they prefer De’Anthony Melton? Is a future late (24-30) pick from the Suns via the Bucks enough of an asset? Personally, I do not think this deal would get done. The Suns could always offer a straight swap of Josh Jackson for Fultz, but Philly is not looking to bring in long term money.

…I am not sure that Fultz will be traded.

But there is a good chance his situation in Philadelphia is irreconcilable. After all, check out what Woj just tweeted.

Sixers guard Markelle Fultz is meeting with specialists today and again mid-week in New York, league sources tell ESPN. There isn't expected to be a resolution on next steps until later in week.

You (and I) may be really high still on Fultz, but the League is probably not. His shoulder issue flared back up and his status with the team is on flux. No one knows how this situation will flesh itself out.

That being said, I like the trade with Indiana. Philly would bring back a decent enough draft pick and a big expiring deal. Collison can play, too. Indiana is not a flashy free agent destination and is too good to tank. How do they land the star they need to become a legitimate contender? Trading for Fultz is reasonable option for acquiring someone with untapped, All-Star potential.

But then again, Fultz’s trade value is terribly hard to determine. Could a team send over a top draft pick? Sure. Will teams low-ball the Sixers? Absolutely. Keep an eye on this situation, though. The NBA drama never stops.