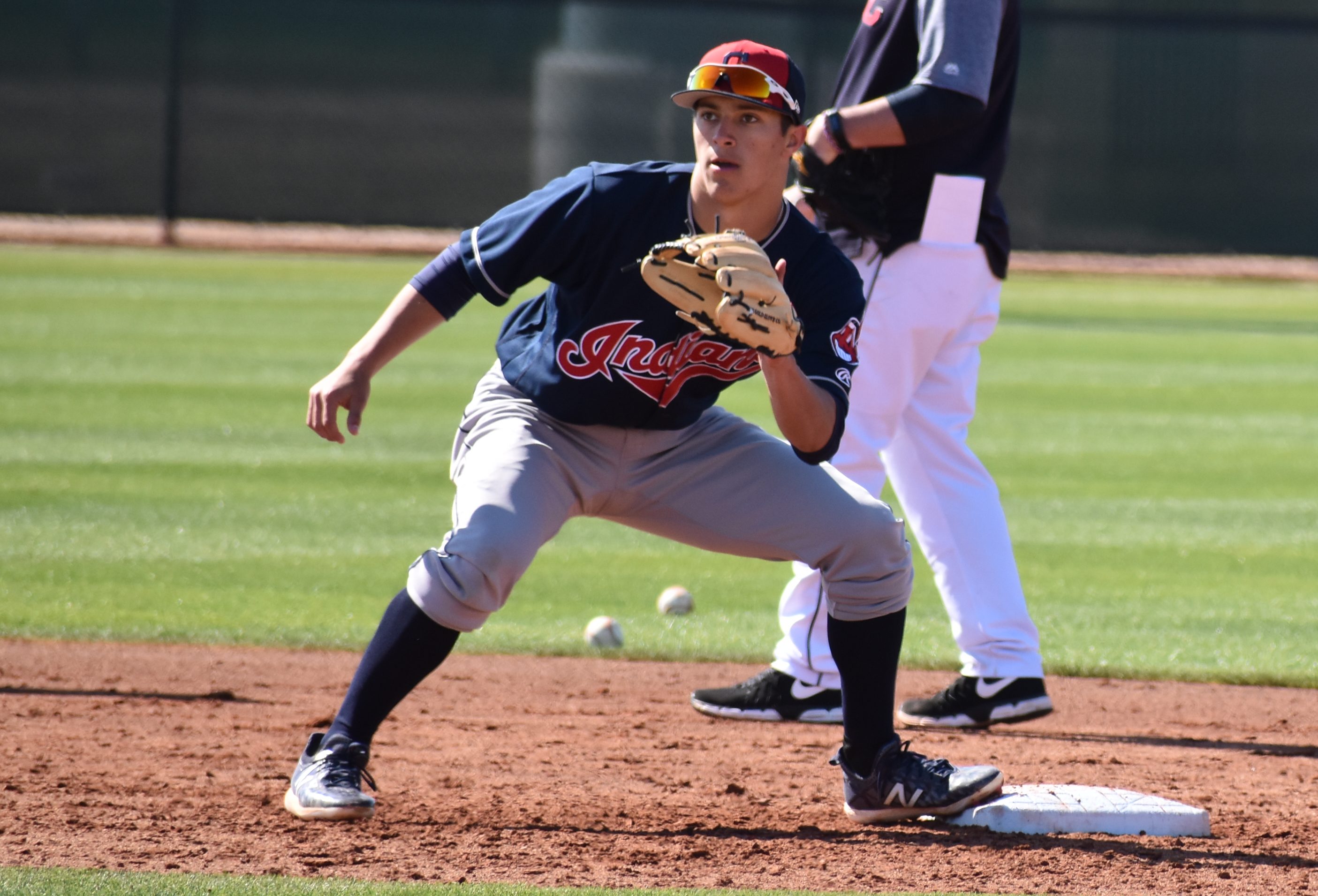 There is always a lot of pressure on a player being an early round draft pick directly out of high school, but Tyler Freeman never succumbed. He had hits in each of his first five games in 2017 with the AZL Indians on the way to being the team’s top player, hitting .297/.364/.414 with five steals and solid defense at short stop.

After this strong start, Freeman stayed in Arizona for extended spring training in 2018, but was promoted to start the regular season in Mahoning Valley. Just like his first season, he started off hot with two hits in his first game, then multiple hits in eight more games in June alone. One of the weakest parts of his game in his initial season had been his lack of power, although his line drive stroke into the gaps made it appear that things would improve as he gained strength. That was certainly the case as he racked up 29 doubles and four triples in 72 games. This raised his slugging percent by nearly .100 over his 2017 mark.

Freeman has a very different style than many of the Indians young hitters as he combines both an aggressive approach at the plate with incredible contact skills. This leads to an extremely paltry amount of strike outs (7.3% in 2018), but also an extremely low walk rate (2.7%). With the aggressiveness, you may expect him to make poor contact often, but Freeman is almost always right on with his swings and had an impressive 24% line drive rate in 2018.

Freeman sits in the dugout during the 2017 AZL Indians season. – Joseph Coblitz, BurningRiverBaseball

Freeman’s extra base hits are a function of that line drive rate, his great speed and his ability to hit to all fields. Last season, he hit to center just 18% of the time, but went to the opposite field 35% of the time, a similar number to his initial season. This ability to spray balls anywhere make it extremely difficult to defend against Freeman even before you look at the distraction of him as a base runner.

As a right handed hitter, Freeman absolutely demolished right handed pitchers in the New York-Penn League in 2018, batting .328/.398/.485, but somehow he is even better against lefties. While he had considerably fewer plate appearances against them in 2018, he batted .417/.427/.583 when he did have a chance. It may seem strange that a hitter could bat over .400 and have an OBP of just .427, but that is because he didn’t walk once against a lefty. Despite this, he struck out just three times. If he has some super natural ability to make contact with nearly every pitch thrown to him, that ability is turned up a notch against lefties making him a nearly unstoppable offensive juggernaut.

This kind of offensive production is incredible out of a middle infielder and it easily makes him the Tribe’s best such prospect (Burning River Baseball had him ranked 15th overall in 2017 and third in 2018, third among 2B and SS last year and first this year). There has been some question as to whether he can stick at short stop, however, where his offensive production would be of the most value.

Just as he is quick to react with the bat, Freeman has good reflexes in the field and is quick to make a diving stop or react to a line drive hit above his head. He has acceptable, but not incredible range. Where the questions come in are in his arm, which will have to grow stronger in the coming seasons if he is to remain at short.

With 14 errors in his first 81 games at short stop, Freeman certainly brings some instability. For comparison, Francisco Lindor committed 14 errors in 157 games in 2018 and it was a career high. Incredibly, however, Freeman gets to more balls than even Lindor does, reaching 4.46 per nine innings compared to Lindor’s 3.99.

The combination of good range, quick reaction time and poor arm screams for a move to second base and the Indians performed such an experiment in extended spring training earlier this year as Freeman would often play an inning or two at second, then switch with Jose Fermin to play an inning or two at short. This experiment was abruptly ended once the regular season began, however, and Freeman played just 86 innings at second out of his more than 500 in the field.

The Indians can keep the idea of Freeman at second alive and keep him ready with a few games each year on the other side of second base, but it is obvious the organization views him as a short stop. One major deciding factor in this could be that his ETA for the big leagues lines up very well with Lindor’s expected free agency. If Freeman spends 2019 in Lake County, 2020 between Lynchburg and Akron, then 2021 in Akron and Columbus, he would be perfectly poised to jump to the big leagues in 2022. This just happens to be the season that Lindor will run out of arbitration and into the open market.

While this is counting chickens before they hatch, the Indians have placed themselves into a situation with no elite short stop options anywhere above Lindor. Nolan Jones is a pure 3B now and is poor enough defensively there has been talk of him not even being able to hold that position down. Yu Chang is a great hitter, but doesn’t have the range for short and will likely advance as a 3B. The worst hit of all is that Willi Castro was traded for what has been six games of Leonys Martin to this point (and Kyle Dowdy). The Indians have some potential MLB utility men in Akron, but Freeman is the only short stop who sticks out as a future super star.

Of course, all this is long in the future. Freeman is only 19 and hasn’t played a full season of professional baseball yet. The hype is there, but we’ll have to watch and see how he plays out in Lake County, Lynchburg and Akron. The Indians have been infamously pedantic when promoting position players and with Lindor still under control through 2022, there is no reason to rush the next in line. That being said, he will certainly have to be ready by then, because at the moment, there is no second option.