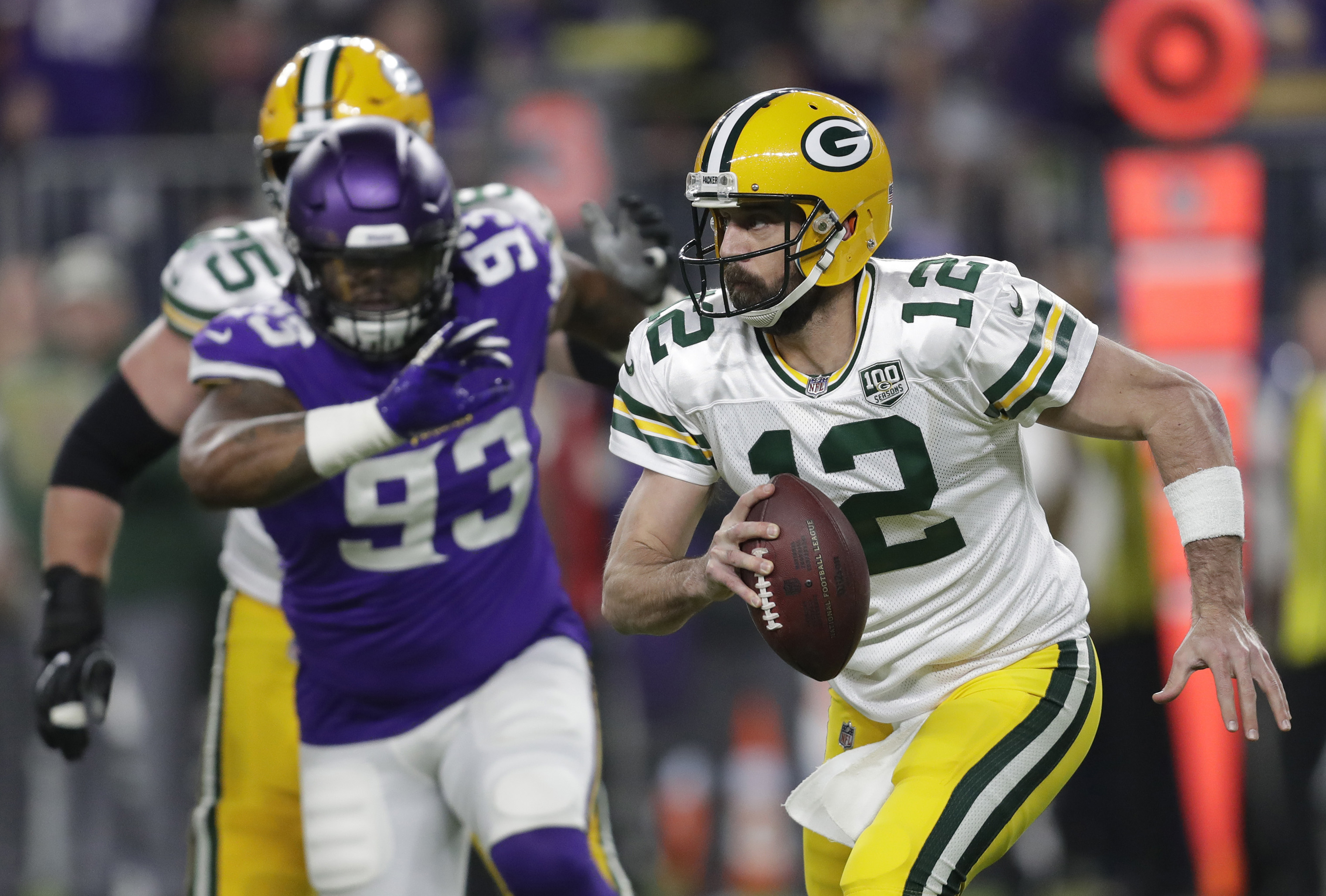 The Green Bay Packers playoff chances all but ended with their 24-17 loss to the Minnesota Vikings Sunday night. The defeat drops Green Bay’s record to 4-6-1 which means they must win all their remaining five games to have any chance at qualifying for the postseason.

Here is a look at seven key takeaways from another heartbreaking defeat for the Packers:

1. The Defense Is Just Too Depleted to Be Effective

The maxim in the NFL is “next man up” but the Packers defense just doesn’t have the depth to play at a high level with all these injuries. From the opening day lineup, Mike Pettine’s defense is missing Mike Daniels and Muhammad Wilkerson up front and linebacker Nick Perry (not to mention last year’s starting ILB Jake Ryan).

The secondary is the most banged up at this point. The Pack was without Kevin King, Bashaud Breeland, Davon House, Raven Greene and the departed Ha Ha Clinton-Dix and Jermaine Whitehead. Kentrell Brice was injured during the game which left the Pack with Tramon Williams and a group of rookies and undrafted free agents to try to stay with Stefon Diggs and Adam Thielen. They couldn’t, and the Packers couldn’t stop the Vikings offense as a result.

2. Mike McCarthy Can Be Creative on Offense, But He Didn’t Maintain It

Look at the first quarter offense the Packers put together. They answered many of the problems that have plagued the club all season. The Packers tried some creative play calls like the end around to Equanimeous St. Brown. They reintroduced the back-shoulder pass to Davante Adams and the result was six points and an early lead. They got the ball in the hands of their playmakers like Aaron Jones and Adams and they involved St. Brown and their backup tight ends in the attack. The Packers also got to the line of scrimmage with enough time on the play clock to call audibles and attempt to draw the defense offsides. They kept the Vikings defense off balance.

But by the second quarter, all of that vanished. We saw the same old predictable play calling and the same frustrating results. The offense struggled and seemed to be fighting itself. The ball wasn’t getting to the team’s playmakers and Rodgers, while more decisive, wasn’t finding his receivers accurately.

An injury to offensive tackle David Bakhtiari made things tougher in the second half, but the creativity was gone, and the offense sputtered again after an encouraging start.

3. The Pass Rush Was a Non-Factor

The Packers finished the game with two sacks but for most of the game, Kirk Cousins had enough time to find his third or fourth option on any given play.

The lack of pressure made Cousins look like a Pro Bowl quarterback as he finished 29-for-38 for 342 yards and three touchdowns. Cousins found Thielen (8 catches for 125 yards), Diggs (8 catches for 77 yards) and tight end Kyle Rudolph (7 catches for 63 yards) almost at will throughout the game.

The Packers also failed to cause a turnover and now have only six interceptions and six fumble recoveries in 11 games. Three of those interceptions belong to the now departed Clinton-Dix.

The two sacks both came in the fourth quarter, but by then, Cousins was in his groove and the Packers were desperately playing catch-up football.

The lack of depth and experience in the secondary limited what kind of packages Pettine could dial up and the results were predictable.

Aaron Rodgers is a competitor and one of the best quarterbacks ever to play this game but this season, something is just off. The Packers signal caller just seems to lack confidence in the team’s ability to move the ball when it counts.

His body language shows this lack of belief. Every time the camera caught Rodgers on the sideline, he looked demoralized or like he knew something bad was about to happen.

Whether it’s a lack of belief in his young receivers or he’s uncomfortable with the offense Mike McCarthy and Joe Philbin are running, something just isn’t right.

The result has been an offense that moves the ball in spurts but cannot move the ball consistently and usually comes up short when the game is on the line.

Davante Adams finished the game with five catches for 69 yards and a touchdown. That gives him 1,022 yards receiving for the season and marks the first time Adams has topped the 1,000-yard mark in his career. It probably won’t be the last.

Adams had three big catches in the first quarter and drew a key pass interference call on a long pattern. Then he didn’t touch the ball again until the fourth quarter when the Packers were already down two scores and the situation was desperate. The Packers cannot ignore Adams for such long stretches if they hope to move the ball consistently. Adams is a special weapon and the Packers cannot forget about him.

6. Many Packers Players Gutted This Game Out

It’s often easy to overlook how tough many NFL players are. So many Packers players came back into this game despite injuries and tried to continue to play and fight for this much-needed victory.

Jimmy Graham played tight end with a broken thumb. David Bakhtiari returned after suffering an injury in the third quarter. Kentrell Brice was hurt, returned to play and was injured again in what had to be a very frustrating game for him. Equanimeous St. Brown suffered an elbow injury and continued to play. This is not a complete list of the players who continued to compete despite being hurt, it’s just the ones we know about.

The sacrifice made by these players to stay out on the field and compete should be respected and acknowledged, win or lose.

7. The Calls to Fire Mike McCarthy Are Getting Louder

With the playoffs a long shot at best, the calls to fire Mike McCarthy will only get louder as the season winds down.

McCarthy has been a very successful coach in Green Bay for more than a decade and won a Super Bowl for the Packers. But there is no doubt this year’s team is lacking something and not playing up to its potential.

The Packers have a new GM who did not hire McCarthy and that can’t work in his favor.

Green Bay must decide if the time has come to move on and the final five games may help determine that outcome.