Living on the edge with the Eagles 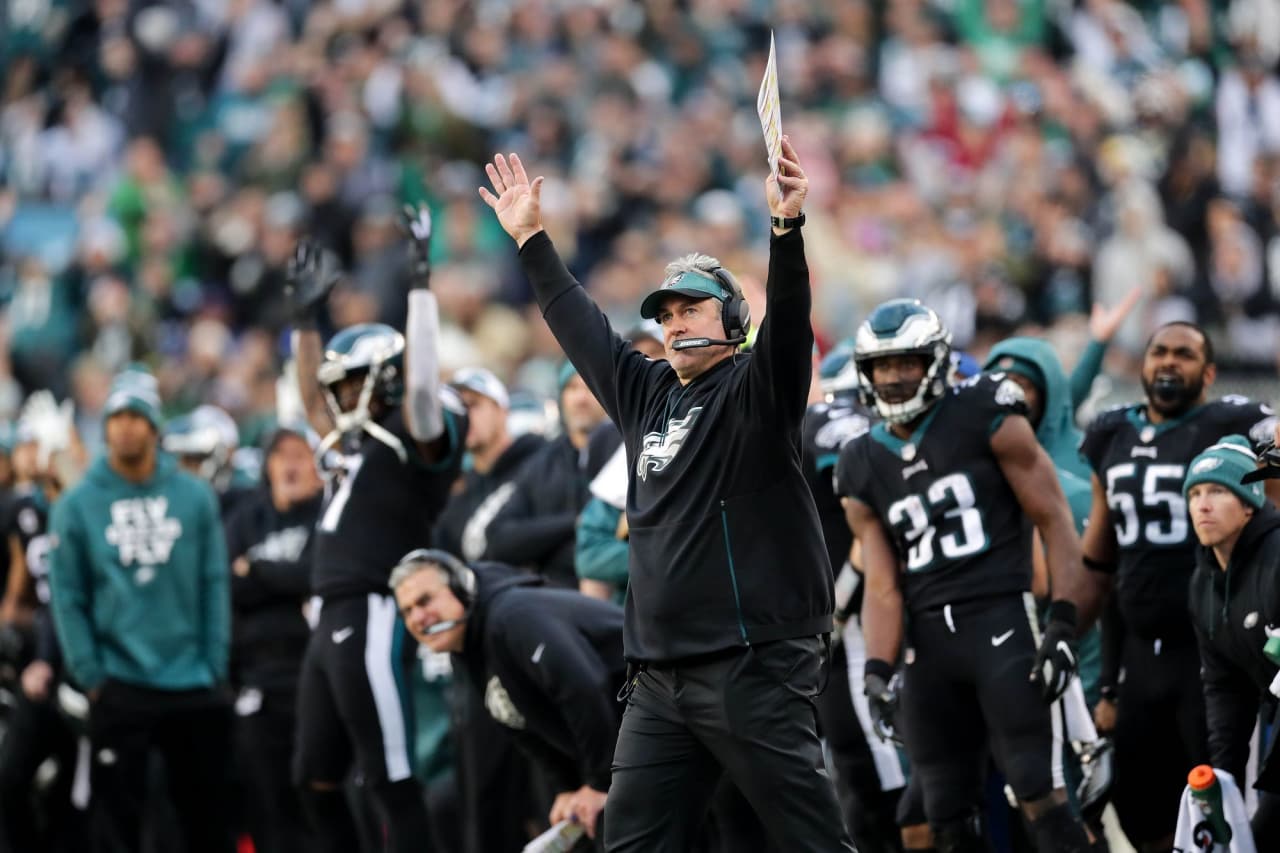 Living on the edge with the Eagles

Many of you predicted a Week 17 showdown at FedEx Field between the Redskins and the Eagles for the NFC East title. That was way back when we were 4-4 and the Redskins were sitting at 5-3.

The devil is in the details. First, we must—I mean MUST—beat the Redskins on Monday Night Football this upcoming December 3rd.

Even the D.C. pundits are conceding the Eagles have a strong probability of winning at the Linc next Monday night. But still, we have to play the game well and with vigor to pull it off.

That win for the Birds if (when) it materializes would essentially tie the two teams with identical 6-6 records…and the Eagles would hold a potential tie-breaker going forward.

The corollary onus (anus?) is on the Dallas Cowboys to get their collective haunches branded by the Saints this coming Thursday night.

Y’all better be rooting for the Saints and Drew Brees to have a country tent revival meeting at the expense of Skeletor and the Cowboys this Thursday.

It would have been a lot better for the Dallas Cowboys if Eli Manning and company had hung a loss on the Philadelphia Eagles, but they didn’t. In what has become a three team race for the NFC East between Dallas, Philadelphia, and Washington, things have tightened up. Here are the current standings and upcoming schedules for the division (h/t to R.J. Ochoa, whom I stole this chart from):

Okay, so if New Orleans takes care of biz against Dallas on Thursday night, and the Eagles james-thrash the Redskins at home on Monday night, we will have 3 teams in the division tied at 6-6.

Now look at the schedule: Dallas and the Eagles are next up. That one is at Jerry World. Tough to predict a win for Philly there, but it is do-able. Meanwhile the ‘Skins host the Giants. They oughta be able to beat the G-Men to go to 7-6.

Say the Eagles do beat Dallas at Dallas to go to 7-6. Fine and well, but then we got the L.A. Rams at their house. Winning out there is plausible but not guaranteed. Say we play a great game but lose anyway. Now we’re 7-7.

Then come the Houston Texans to the Linc. They look special this season and they’re currently on an 8-game win streak. Hmmm… We will have to play a complete game in all phases to stop them. Maybe we do and go to 8-7.

Back to the Redskins— after we beat them next Monday they fall to 6-6. But then they host the Giants and probably come out of that at 7-6. Then they travel to Jacksonville and probably trounce the Jaguars to move to 8-6. After that, they deal with the Titans in Nashville, who I am guessing will give the Redskins a helluva battle in a fight for their own playoff hopes in the AFC. I’m predicting Tennessee beats the Redskins, who then fall to 8-7.

Dallas is meanwhile having trouble with the resurgent Colts in Indy and loses there to go to 6-8. But the ‘Boys rally to beat the Bucs at home then clobber the Giants at the Meadowlands to end up at 8-8.

Okay, so now it’s the 8-7 Eagles vs. the 8-7 Redskins with the division on the line at FedEx Field. One team will take the crown at 9-7, the other will share 2nd place with the 8-8 Cowboys.

That’s how the math shapes up in my reptilian brain. Throw an unexpected upset into that crystal ball gmish and the math comes tumbling down, but right now I’m feeling it— Eagles at Washington in Week 17 for the title.

The three (3) must-wins just to get to that moment of truth for the Eagles are the upcoming Monday night game with the ‘Skins, the rematch with the Cowboys in Dallas, and the home game against the Houston Texans in Week 16. Any success beyond those three must-wins would be pure gravy.

Scrambling for a final week showdown with the Redskins is not what Doug and Howie had in mind going into the 2018 season. But this is where we are, paying the price for blowing at least two winnable games earlier in the season.