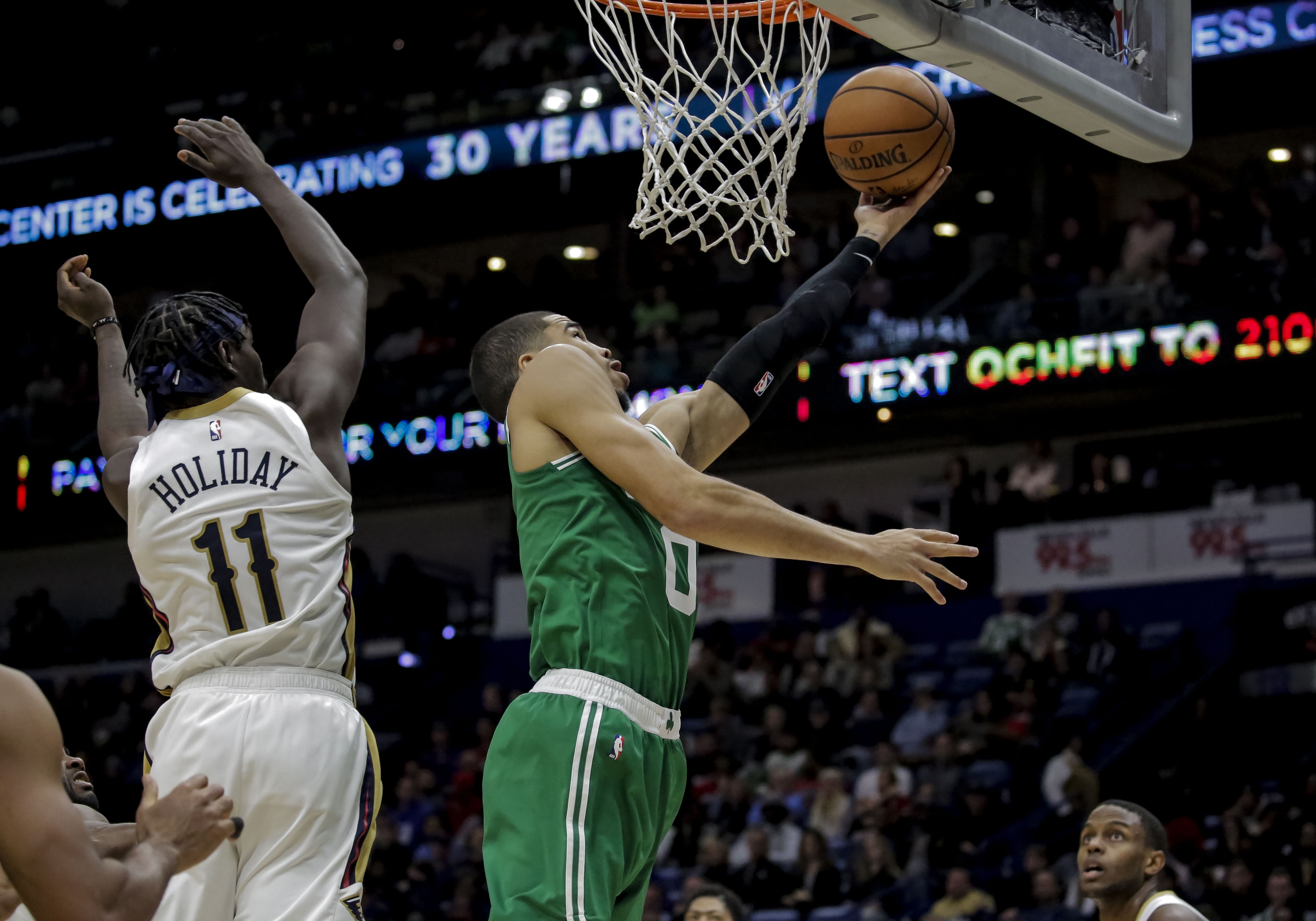 Irving liked the new starting lineup enough to bring it up on his own after the game. The numbers, albeit based on a small sample size, suggest he may have a point. Monday’s starters now own a 25.2 net rating over 52 minutes — statistics that put that group sixth among the NBA’s 76 lineups with at least 50 minutes played. Irving said it takes pressure off him when Smart’s on the court to guard an opponent’s best ball handler and take on some of the playmaking responsibilities.

“When he’s playing with me we play pretty well together at the 1 and 2 spot. So defensively and offensively I feel like he brings our numbers up. And I’m appreciative of that,” Irving said. “My energy can get depleted coming up and down and directing the ball every single time. And having Marcus in there gave me that outlet to be able to get off the ball. So we did pretty well with our unit tonight. We started off the game well and we never looked back.”

The Athletic: Could the Celtics have found a new starting lineup? The results say they should at least consider it

Last week I said this:

The Celtics problems are self-made, and more than anything, this team needs a mental jolt. Maybe it’s as simple as a benching, or maybe it’s as extreme as a trade rumor. Whatever it is, there has to be something that snaps this team into focus.

With Jaylen Brown hurt and Gordon Hayward still not “Gordon Hayward,” Brad Stevens took the opportunity to give the Celtics that mental jolt, and man did it work out.

The Celtics came out focused and ready to play. They followed the lead of the only two players on the team whose effort has pretty much been unquestioned this season and they rode it to a big lead.

While it’s important not to overreact to single games, there is also a feeling that this is one hell of a confirmation that a lack of mental focus has been Boston’s number one issue during that mediocre start.

Boston Celtics starters shot 44.6% from the field over the first 20 games of the season, including 34.3% from three. They averaged 70 points, 15.3 assists, 27 rebounds, and eight turnovers.

Again, one-game numbers don’t mean a final answer, it just means this starting unit bucked a big trend. They also did it against a Pelicans team that came in struggling just as much as the Celtics, and who looked a lot like the C’s of the first 20 games.

But Boston did what they were supposed to do to a team struggling like that. They came out with fire and purpose. They weren’t just hot from the field, they were getting stops, getting out in transition, and generating the types of shots that gets teams hot.

And now the question becomes… what happens next? After the game Brad Stevens said to reporters…

Marcus, and Baynes, they bring such a level of grit to our group and I wanted to see with Marcus in the starting lineup. We won’t be set on a starting lineup until forever.

Does this mean the experiment will continue on Friday? Does Stevens see if Marcus Smart is enough to provide the same jolt as a starter and move Mook to the bench if Jaylen Brown is ready to go?

We’ll have wait and see. For one night, the Celtics were the Celtics we’d hoped they’d be. They defended, they ran, they attacked, they rarely settled for jumpers, and they only had to ride Kyrie Irving for certain stretches. Now the trick is making this the new normal.

MassLive: Boston Celtics’ offense shines with Marcus Smart in starting lineup: ‘We did pretty well with our unit tonight’

Globe: Celtics showed swagger and vigor in one of their better games of the season

“It’s frustrating not to be there for your team,” Brown said, when asked about it. “We’re struggling right now, when your back’s against the wall, I believe that’s the perfect opportunity to show who you really are. I would love more than anything to be out there right now in the midst of everything. Everything that’s going on, the media saying this, saying that, just go out there and just kick somebody’s ass, or give it your best shot with your teammates, just to try to win. We need that more than anything, desperately. We haven’t been doing that, but I would still like to be out there.”

It’s never perfect, but it’s the process of being good that matters most.

I’m not trying to shit on Jaylen here. I think he’s a really good player and I think the Celtics need him to be his best if they’re going to reach those heights we have in mind for them.

And I also get the situation he’s in when he made this quote. He’s talking to the media, he’s pissed, and he’s leaning on some cliche’s to get by. Trust me, I’m not mad a the guy for saying it.

But the reason Brad Stevens brought up Kaizen in the first place is to instill a “process over results” mentality that teaches players to not to have to rely on this ultra-motivating moment to suddenly show up… because those ultra-motivating moments are fleeting. It’s easy to have an “us against the world” mentality when there are legitimate doubts, but how does that motivation get generated in a season where the team was crowned East champs in September?

What do you show then? What opportunity does that present?

There’s a reason the Marcuses helped so much last night, and it’s not just because Boston was scuffling. They’d play like that if Boston was 20-0 or 0-20 going into the game, because every day is a perfect opportunity to show who you are.

Kyrie Irving was asked about this video…

“It’s magic, man,” Irving said Monday evening, smiling. “That’s all I can say. It’s just magic. I’m just appreciative of Nike giving me the technology, my shoes, being able to capture that on camera.”

Asked directly if the video was real or fake, Irving repeated himself.

It’s a fun video, but I’m absolutely floored by how many people think it’s real. It’s a brilliant viral marketing campaign that does exactly what it’s supposed to do…

Get you to look at his feet.

Those are his new Kyrie 5’s. Oh, they happen to be on sale now.

Globe: Terry Rozier says the Celtics are ‘still getting better’ and ‘still growing’

NBCS Boston: Celtics’ huge night on offense too much for the Pelicans  |  Chris Mannix: Celtics have assets to get Anthony Davis

MassLive: Boston Celtics’ Kyrie Irving: Anthony Davis one of the NBA’s best, plays ‘as if we’re playing on a little rim’