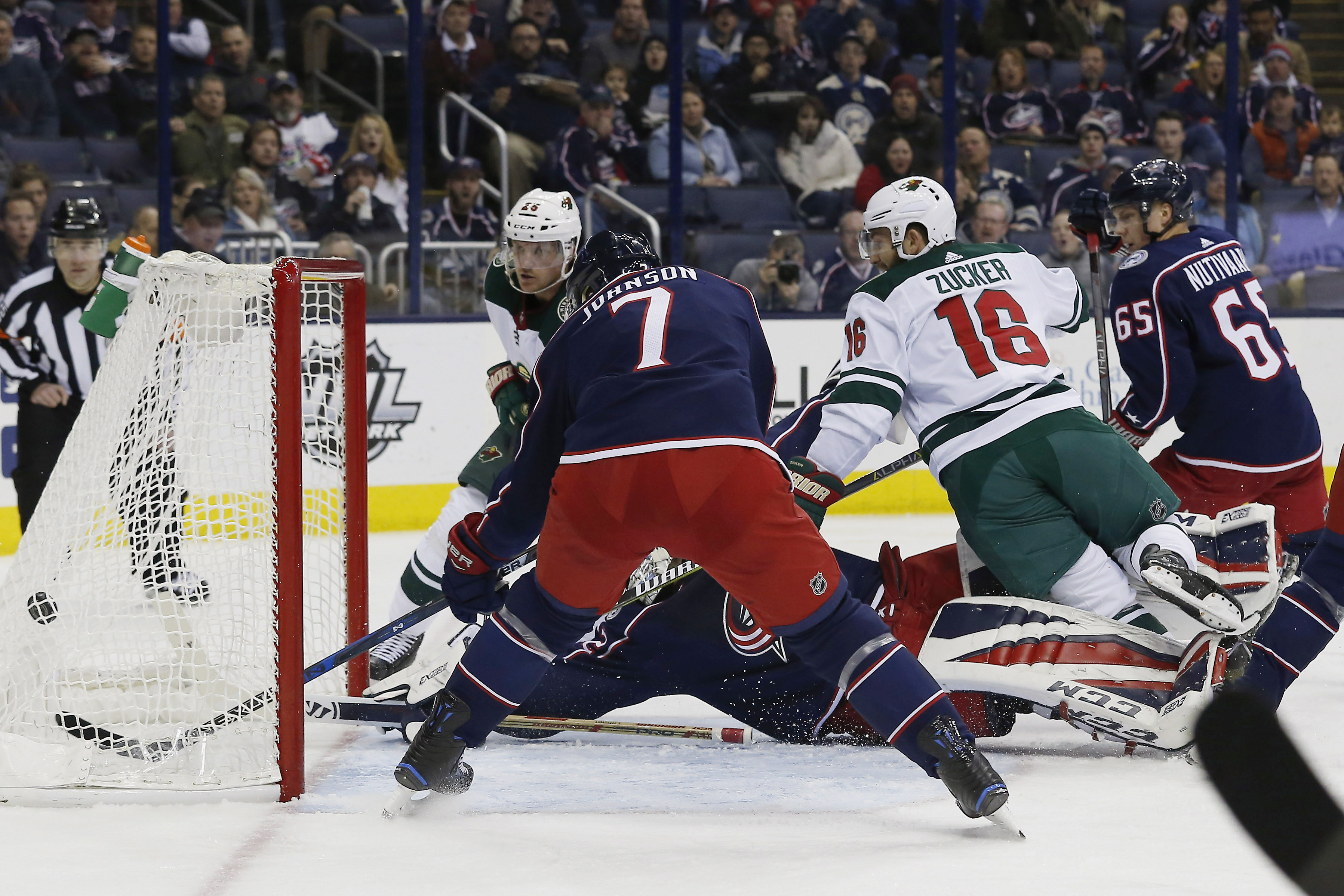 Being around sports my entire life, has allowed me to pick up on subtle personal cues.  When you can look into the eyes of a player and see eroding confidence or panic even though they may not be projecting a lot of other signs.  On Tuesday’s 4-3 loss to the Coyotes, when Arizona cut the Wild lead to one I could see it in the eyes of goaltender Devan Dubnyk.  Anxiety, confidence lost and what happened shortly after that was predictable.  Dubnyk gives up two more goals in quick succession and that was the game.

Wild Head Coach Bruce Boudreau has been around the game for at least 40 years (mind you, I’m 40 years old myself) I would imagine he could pick up on those same personal cues.  If so, why didn’t he pull Dubnyk at that point in the game where the team hadn’t given up the lead?  Was it to avoid conflict with his #1 goalie?  One coach unafraid of conflict is Columbus’ Head Coach John Tortorella.  The Blue Jackets are an eerie mirror-like opponent to the Wild with very similar statistics and an identical record.  Which 2000 expansion peer will come out on top this evening?

1st Period Thoughts:  Minnesota would have the first quality scoring chance of the game as Jason Zucker gathered up a puck that was in the slot as Eric Staal charged down the middle of the ice for a quick shot but Sergei Bobrovsky simply absorbed his attempt.  A few minutes later a turnover near the Wild blueline turned into a decent shooting attempt by Josh Anderson that Dubnyk gloved.  After this shot on goal, the ice seemed to tilt in the Wild zone as the Blue Jackets started to dominate the play as Oliver Bjorkstrand nearly cashed in on a backhander.  Minnesota could only just chip the puck out of the zone which were easy turnovers for Columbus to exploit.  The Wild were really playing with fire at this point as Pierre-Luc Dubois fired a shot on goal that didn’t miss by much.  Columbus would give the Wild a ‘gift’ as Bobrovsky tried to send a puck out of the zone on his own which was knocked down by an alert Staal who turned and saw Mikael Granlund flying into the offensive zone and he’d take the puck and blast a slap shot from the high slot that trickled through.  1-0 Wild.  Minnesota would then get a power play shortly after the goal as Columbus was tagged with a faceoff violation.  Unfortunately the Wild did nothing with the power play as the Blue Jackets were pressuring Minnesota’s puck carriers quite aggressively and they’d come up empty on the man advantage.  Columbus would go back on the attack and they’d tie the game as Riley Nash turned and swung a diagonal pass down low to Markus Hannikainen who chipped it into the back of the Wild net.  1-1 game.  Minnesota’s 3rd line of Charlie Coyle, Jordan Greenway and Joel Eriksson Ek had a good shift, working the puck down low and then sending shots on Bobrovsky and crashing the net in search of rebounds.  The Blue Jackets’ speed and quickness started to give the Wild some problems as Bjorkstrand had a few more terrific opportunities as Minnesota’s defense couldn’t seem to keep up.  Zucker would block a shot that appeared to hit him right in the laces that left him hobbling back to the Wild bench and he was immediately escorted back to the locker room, not a good sign.  Blind passes off the boards continued to squander possessions, making the Wild’s situation that much more difficult.  Jonas Brodin would take a penalty late in the period but the penalty kill was able to keep Columbus’ power play at bey going into 1st intermission with both clubs knotted at one goal apiece.  Columbus out shot the Wild 10-7.

2nd Period Thoughts:  The Blue Jackets would start the period on the man advantage and despite being just a little over 8% at home on the power play they’d cash in.  Alex Wennberg would draw the Wild’s attention down low and he’d send a pass to just above the right faceoff circle where Cam Atkinson stepped into a slap shot that blew by Dubnyk.  2-1 Columbus to the ire of Boudreau.  The pain continued as Dubnyk looked like he was laboring even on the most routine of saves.  The Blue Jackets’ 4th line would send a puck on goal as Nash redirected a Zach Werenski point shot that fluttered by Dubnyk.  3-1 Blue Jackets as Boudreau got upset on the Minnesota bench.  The Wild would generate a few token shots on Bobrovsky who also appeared to be fighting the puck a bit but Minnesota couldn’t get in close to take advantage of the rebounds he was giving up.  The Wild looked lethargic, and in a battle for the puck they’d inexplicably stop and Dubois swung a pass out from beneath the goal line to Artemi Panarin who put the puck on his forehand quickly before beating Dubnyk glove side on a wrist shot.  4-1 Blue Jackets.  Minnesota would answer back as Zach Parise managed to tuck the puck off Bobrovsky and inside the left post and in.  4-2 Columbus.  A delay of game penalty on Ryan Suter gave Columbus a good opportunity to add to their lead.  Dubnyk would make a great save on Bjorkstrand and Boone Jenner would crash the net and shove the Wild goalie into the net.  The play would be reviewed to see if Bjorkstrand’s original shot went in as the officials ruled Jenner’s attempt was goaltender interference.  The replay clearly showed Dubnyk making the stop on Bjorkstrand and it was ruled no goal and Minnesota would go into the 2nd intermission trailing Columbus by two, 4-2.

3rd Period Thoughts:  The Wild were swarming early in the 3rd with their top lines, peppering Bobrovsky with shots.  Minnesota kept applying pressure and sending every shot they could on Bobrovsky who had a fair share of traffic nearby.  J.T. Brown would fly into the offensive zone and wire a shot that the Columbus goalie fought off.  The Blue Jackets would counter with some offensive pressure of their own and Dubnyk was making the saves but every one seemed to be a struggle like something was off.  With the Wild trying to pinch with their defense this made them vulnerable to the odd man rush and Panarin and Atkinson would race down the ice in a 2-on-1 and Dubnyk managed to shut the door.  The Wild just didn’t seem to have much gas left in the tank as the Blue Jackets were able to disrupt nearly every attempt to enter the offensive zone.  Minnesota would pull Dubnyk with 2 minutes left and even with an extra attacker the Blue Jackets pinned the Wild in their own end forcing them to defend the empty net.  All the Wild were able to generate were a few shots from the point that did little to threaten Columbus as they coasted to a 4-2 victory.

This was another poor effort by the Wild, most notably in their own end and between the pipes.  Dubnyk appeared to be fighting the puck all night and when he was left to fend for himself a few times in the 2nd he was victimized.  Offensively the Wild had some flashes of good pressure, but they still didn’t test Bobrovsky nearly enough and Minnesota appears to be a bit aimless right now.  It will not get any easier with the Toronto Maple Leafs coming to town on Saturday.

D – Filip Johansson (Leksand, Allsvenskan) ~ There isn’t much to report on the Wild’s top pick from 2018.  He hasn’t been on the scoresheet in weeks even though he’s playing in Sweden’s 2nd tier league.  Johansson has just a single assist, 14 PIM’s and is a -5 in 20 games this season.

D – Simon Johansson (Almtuna, Allsvenskan) ~ No relation to Filip, he has had a slightly more eventful year after being loaned from Djugardens to Almtuna early in the season.  Simon has 2 goals, 7 points, 10 PIM’s and is a -5 in 22 games.

Let’s Play Hockey issued its first set of rankings, here are the Top 10 for both Boys and Girls for Class A and AA as of 11/28/18.