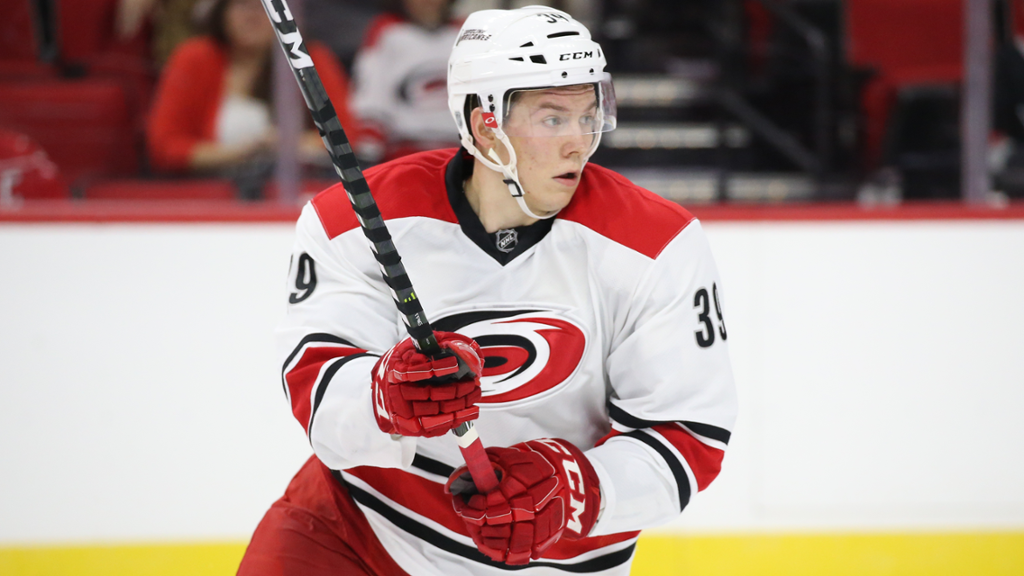 Sometimes you have to take a risk and roll the dice in the NHL to fill a roster hole. The Edmonton Oilers did exactly that earlier this afternoon, claiming the talented Valentin Zykov from the Carolina Hurricanes. The former second round pick in 2013 (37th overall) struggled in the NHL this season after dominating in the AHL a year ago.

In 13 appearances with the Canes this season Zykov mustered just three points, all of which were assists. It was a disappointing start to the season for a player that had Hurricane fans excited after scoring 33 goals in 63 AHL games last season. He would finish the season in Carolina, posting 3-4-7 in ten games for the Canes. Things were looking up in a big way for this player a season ago.

Things change, however, and that was certainly the case this past summer for the Canes. New ownership began to mold the team in its vision, while a new GM and head coach came to power. Zykov started off slowly, and as a result lost his job with the team. It was a swift fall from grace for a player thought to be a big part of the team as recently as April.

In response to the Zykov claim, forward Patrick Russell was assigned to the AHL’s Bakersfield Condors.

How Edmonton Could Benefit:

There honestly isn’t a single way this could backfire for the Oilers. They didn’t give anything up here except a contract slot to acquire a player that might be able to help them inside the top-nine. Zykov is only 23, is a right shot and possesses enough skill to make him a threat in the offensive zone.

The Oilers simply do not have enough right shot wingers in the system with skill, so Zykov is going to get a chance to impress with his new team. Those traits alone will benefit this hockey club.

Zykov posted solid underlying numbers with the Hurricanes in his brief NHL stint a season ago. In addition to his seven points in ten games, he managed a 58.9 Corsi For% at five-on-five while finishing with a 66.7 GF%. He had an impact for the Canes on arrival, which was a solid sign for the player.

In terms of what Zykov brings, here’s a look at the player via Canes Country:

“From the start of the 2017-18 campaign, Zykov set up shop atop the AHL goal-scoring list, but that fact came with an asterisk – his remarkably high shooting percentage. As the months wore on and the big Russian winger kept piling up goals, everyone patiently waited for him to come back to Earth, and he never did.

Six and a half months into the season, at a point where the playoffs were out of the realm of realism, the Hurricanes finally gave Zykov a look. In his second career NHL stint, Zykov quickly proved that his lofty AHL numbers wasn’t a series of good luck or a byproduct of being on an offensively dominant Charlotte club – it was legitimate.

Upon being lined up with Sebastian Aho and Teuvo Teravainen (Carolina’s top point producers and breakout stars this past season), Zykov broke out in a big way. His oft criticized slow foot speed certainly didn’t stand in the way between him and an outburst of three goals and five points over a three-game stretch in late March and seven total points in a string of eight games before seeing south of ten minutes of ice time in Carolina’s final game of the season – a 3-2 overtime win against the Tampa Bay Lightning on April 11.”

Where Will He Play?:

Zykov is a right shot forward with skill, a history of goal scoring at every level, and the ability to help out on the powerplay. I think he’ll come to Edmonton and slide in on line with Ryan Spooner and Jujhar Khaira.

Zykov isn’t a fit for the “Identity line” and the club is trying to put Jesse Puljujarvi in a position to succeed, so he likely stays on the RNH line. The Oilers could remove Alex Chiasson from the McDavid line, but Chiasson has earned the spot right now and heater or not he is producing.

Starting Zykov on the Spooner line likely won’t result in game-breaking numbers, but it will add some skill to the group and give Spooner a natural goal scorer to play with.

I suspect Zykov will get some looks on the second powerplay unit as well, possibly as a net-front presence. On the face of things, that doesn’t seem like an ideal spot, but it is an area he had success with at both the AHL and NHL levels a season ago.

I can’t help but think this is a solid waiver claim from the Oilers. There is almost no risk and I think the player is far better than he has shown so far this season. If he works out, the Oilers will be a better team for it.