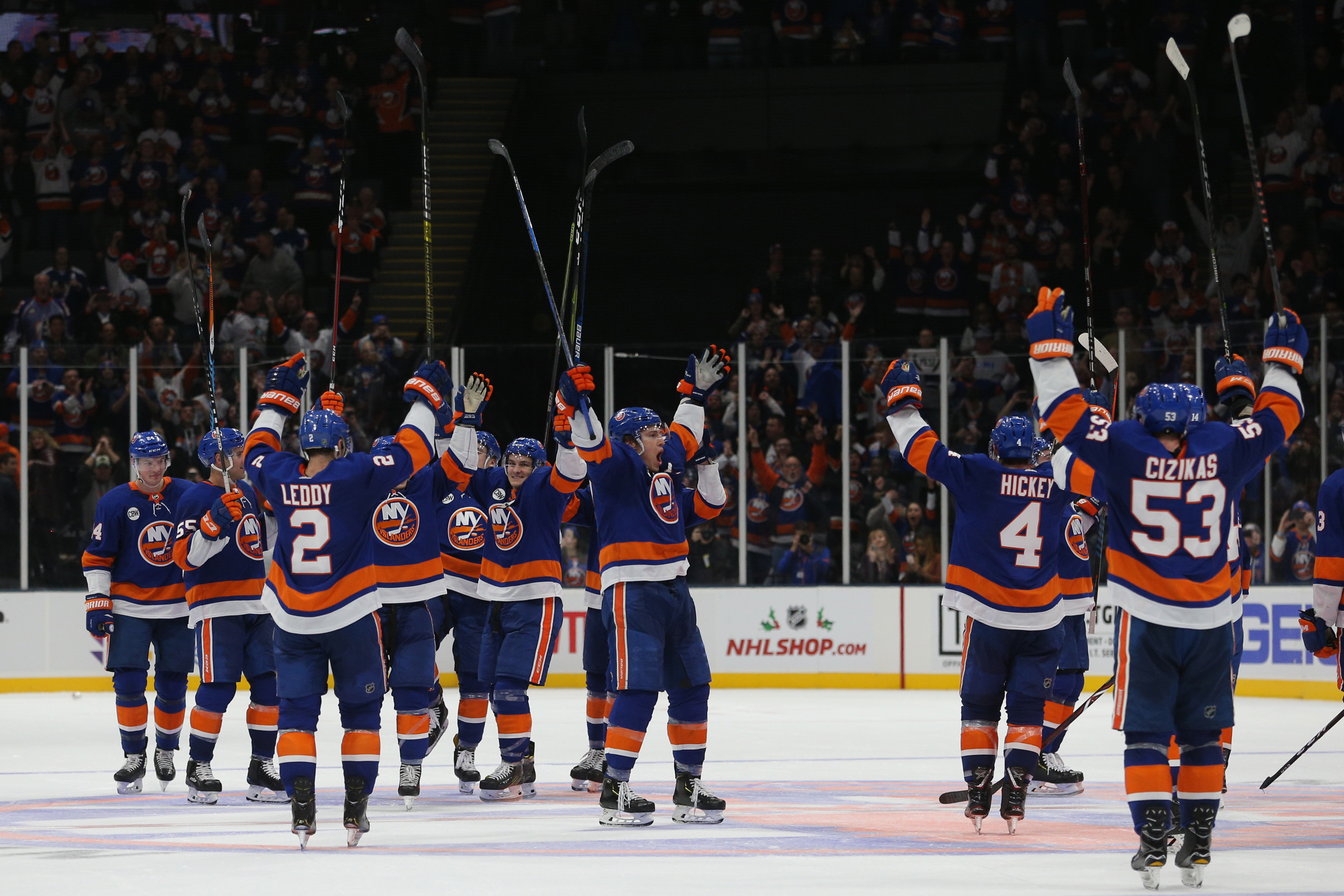 UNIONDALE, N.Y. — Was it the way the Islanders drew it up? Probably not, but on a night when a hockey game on the first of December felt like one in the middle of April the Islanders knew it was a win they had to have.

Down 2-0 in the second period, the Islanders rallied to defeat the Columbus Blue Jackets 3-2 in their first regular season game back at Nassau Coliseum since 2015. The win capped a night that lived up to the hype that had preceded it in the run-up to the Islanders Long Island return.

“It’s fun playing hockey when you go out there and there’s that energy,” Anders Lee said about the arena’s atmosphere on Saturday. “There’s that momentum. Just everything. You get the feels during the anthem. From the time we rolled in tonight we knew it was going to be special.”

Islander fans had begun arriving hours before puck drop on Saturday with a small group of fans setting up tailgates in the early morning. By the time the players had started to arrive, the parking lot had turned into a sea of tailgaters.

And the energy continued when they entered the building, erupting when the Islanders hit the ice for warmups and as they skated out to start the game. The raucous crowd even sang along to the national anthem before the game.

“The atmosphere, the fans it’s just hard to play here for the opposing team,” said Anthony Beauvillier, whose second-period goal tied the game at 2. “It’s great. It’s five minutes away from everyone’s house and just coming here and the fans are crazy in warmup. It’s a great experience.”

Saturday was the first of 21 home dates that will be played at Nassau Coliseum. Coincidentally, the Islanders last regular season home game in Uniondale was against the Blue Jackets as well.

They suffered a disappointing overtime loss to Columbus that time, but this time around they wouldn’t suffer the same fate.

“It was amazing – you get the feeling when we went down 2-0, you didn’t want to let them down,” Matt Martin said.

It was Anders Lee who kicked off the Islanders comeback in the second period. A strong shift from his line led to a fortuitous goal, which after video review was ruled a good goal.

The Islanders kept the pressure on the Blue Jackets which led to an odd-man rush and to Beauvillier putting his own rebound into the net. It was at 7:09 of the third that Casey Cizikas scored the go-ahead goal for the Islanders.

“I had a lot of emotions running through my body,” Cizikas said about the winning goal. “I think I was more tired from screaming from the celebration than from the actual shift. (Ryan Pulock) made a hell of a play. He drew the two guys going wide and he made a perfect pass to me.”

The Islanders next game back on Long Island won’t be until December 10, when they host the Pittsburgh Penguins. In between that time, the Islanders will be back at the Barclays Center on Tuesday for a meeting with the Winnipeg Jets.

Islanders coach Barry Trotz was well aware after the game that their next contest in Brooklyn will have a much different feel.

“Well, it’s going to be quite different. I know it’s going to be a little quieter I know that,” Said Trotz, who was ushered with chants of his name as he made his way through the crowd towards the interview room after the game. “We’re going to have to be self-motivated… We’ll just go back and we have some really good teams coming up.”