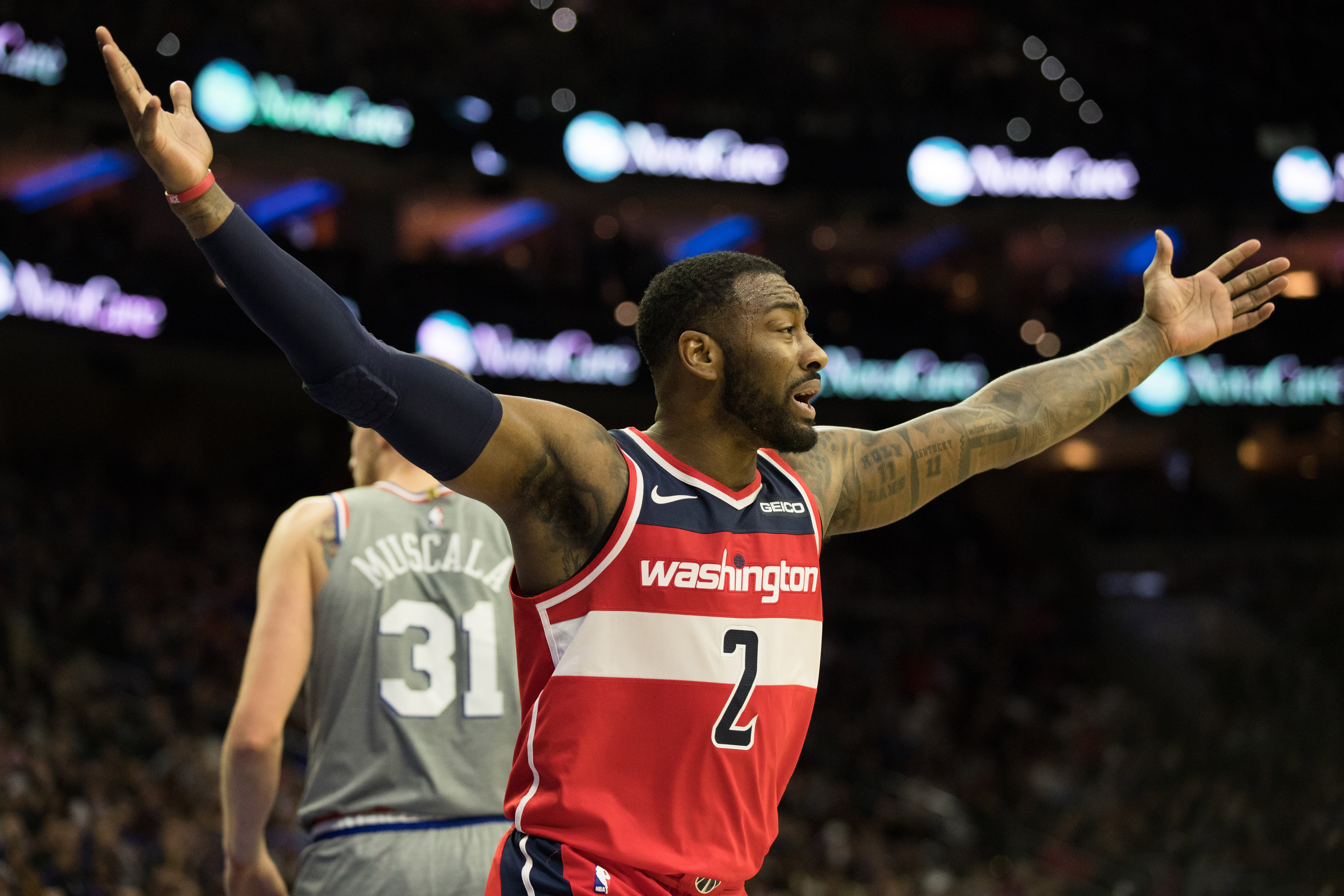 PHILADELPHIA – John Wall expressed his displeasure with the officials on Friday night after the Washington Wizards were blasted, 123-98 by the Philadelphia 76ers, falling to 8-14 on the season. Throughout the game, he was driving to the basket as defenders closed in on him around the paint. He felt like there was a lot of contact, but said he never get those calls and could care less about the referees. His underlying frustration begins with officials claiming that contact against him does not look like much since he is a bigger guard and that they cannot call it every single play.

One official hit Wall with a technical after he drove to the basket by splitting two opponents and making a shot up and under. He stood near the baseline and clapped. Granted, one could argue that the tech was given because of the constant complaining from him and other Wizards, but statistically speaking on last night’s game specifically, Wall’s point may be valid.

In 25 minutes of playing time and with 15 field goal attempts, Wall made one trip to the free-throw line for two attempts. Though he can knock down the jump shot at times, he knows it is better to drive to the paint and either attempt to get his own shot or dish off to one of his teammates. Being guarded by the opponents, but not getting many free throws puzzled his backcourt teammate, Bradley Beal who said he understands Wall’s grievances with the officiating.

“I always understand John’s frustration,” Beal said. “John’s a guy who attacks the basket. That’s what his game is. He attacks. He’s in attack mode. It’s frustrating because he does get downhill. He does have the advantage over his defenders a lot of times…we feel like sometimes we don’t get rewarded.”

Bradley Beal on John Wall's beef with the officials: "I always understand John's frustration. John's a guy who attacks the basket. … He attacks, he's always in attack mode and it's frustrating because he does get down hill. … Sometimes we feel like we don't get rewarded." pic.twitter.com/4fA9wmbO11

Wall’s history with the officials is well documented. In the 2016-17 season, he received a career high of 15 technical fouls and was ejected twice. Last season, he had a total of six technicals, which he already matched this season after just two months of basketball played.

Though Wall and Beal’s point may be valid, what is even more of an issue is the way they, sometimes, respond. Many guys on this team will look at the referees and stand with their hands up if they felt like they drew contact but did not get a whistle. As they are doing that, their opponent is rushing to the other end of the court scoring in a fast break situation. You can bet this has led to some of Washington’s putrid defense over the years. Beal said last night that at times he and his teammates get too caught up into trying to plead their cases with the officials.

“Sometimes we can,” Beal said. “Whether we carried it over, I’m not sure. I think at times we do and at times we don’t. I know we definitely have a problem with the refs…. I don’t know, I could really care less about the refs.”

Beal admitted that a lot of this team’s frustration is not just with officiating but everything as a whole; them not winning being at the top of that list. Nevertheless, he said the key is for them to go through these trials and tribulations together as a unit and not allow the circumstance to make them turn against each other. That line makes PR happy given all of the drama surrounding the team, but if it actually happens remains to be seen.