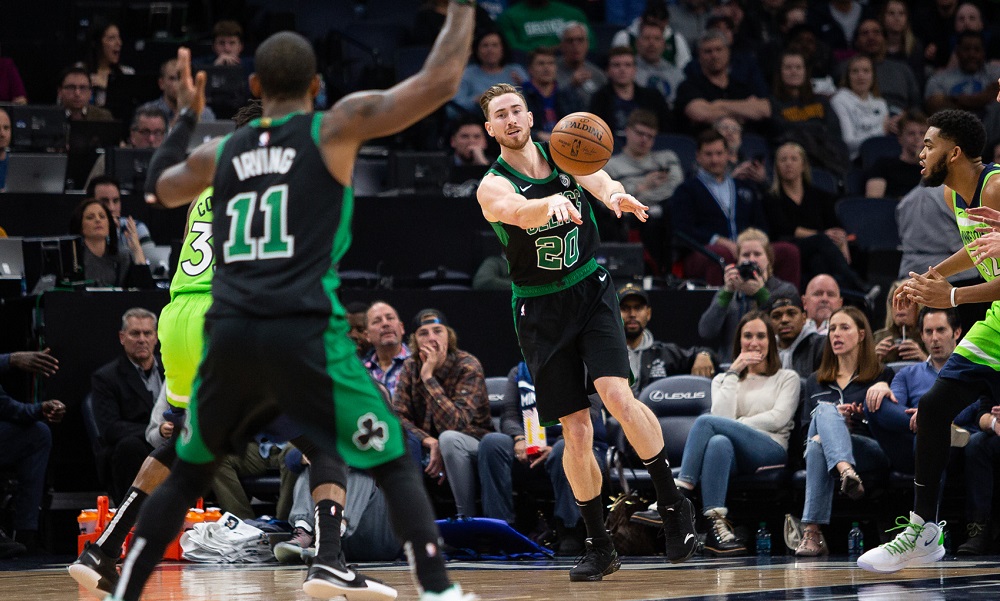 After his long, long road back from last season’s nightmare, Gordon Hayward is finally looking like the All-Star we expected him to be. In 30 minutes off the bench, Hayward put up a game-high 30 points on 8-16 shooting (including 4-5 threes and 10-10 at the line), with nine rebounds, eight assists and two steals. He scored 16 of his points in the fourth quarter to clinch the 118-109 win at Minnesota. And he did all this on the second night of a back-to-back.

The Celts held the lead most of the night, but the Timberwolves made them work for the win. Boston led 89-79 with 10 minutes to go, but gave up a 10-point run that brought Minnesota into a tie. However, Boston responded with nine straight on a Marcus Morris three, two Mook free throws, a Terry Rozier sneakaway dunk, and two FTs by Hayward (who was fouled on a flashback-inducing lob pass to the rim).

Still, the Wolves kept coming back, crawling within 103-101 with 3:31 remaining. Again, the Cs responded, with six straight points, four of them by Hayward. After two Minny free throws, Hayward added a driving layup and two FTs of his own, giving the Cs a 113-103 lead with 1:23 remaining, and the Wolves’ will was finally broken.

Gordon’s teammates were happy for him:

📹 @KyleDraperTV talked to @gordonhayward after the C's win and of course the team had to douse him in gatorade 🤣🤣🤣 pic.twitter.com/Q1q92CN6yj

The Celtics have now won four of their last five while the Wolves had a four-game win streak broken.

Although the Wolves made six of their first seven shots to control the game’s opening minutes, the Celtics surged back with a 16-6 run and led 29-26 after one. A good start has been important to Boston’s fortunes. They are now 10-3 when ahead or tied after one, 3-7 when behind.

Marcus Morris picked up three fouls in only eight minutes in the first half (although Brad let him play through it and Mook hit two triples in the next three minutes).

Boston led 72-58 midway through the third, when consecutive threes by Andrew Wiggins sparked the Wolves back into it. The quarter ended with the Cs up 84-77.

Giving up the aforementioned 10 straight points plus a 9-2 run, both in the fourth quarter, was not ideal.

Wolves had five in double figures, led by Derrick Rose with 26 points on 11-18 shooting.

The refs were sketchy all night, including eight travel calls on both teams combined.

Minnesota wore their lime green uniforms, which are hideous.