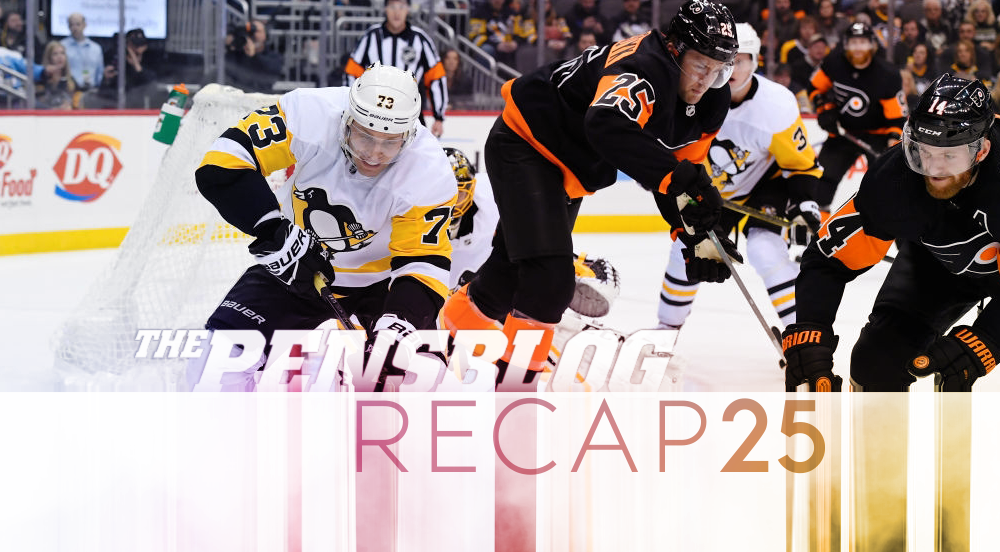 The Penguins lost again, made some bullshit mistakes, and were punished for them.

Stop me if you’ve heard this one before.

Perhaps the most irritating thing about it, though, is that they didn’t play that poorly.  Yes, they pissed the puck away a lot.  Yes, they blew some coverages.  And yes, they gave up a metric fuckload of breakaways, all of which can be summarized by this breakaway Voracek was gift-wrapped in the second period.

Tanner, my dude, who in the fuck are you passing to there?

all stats and map via naturalstattrick.com

What this seems to suggest is that the process is there for the Pens.  They’re doing nearly all the right things except for not turning the damn puck over.  What’s more, they’re getting punished for that shit at what seems like an astronomical rate.

And even as the calendar turns to December and they sit 4th from the bottom in the conference, things might not actually be as bad as they seem.

And even considering the Metro being a total bloodbath year in and year out, it’s worth also considering that after 25 games last season, the Pens had taken just 27 points away.

So maybe, just maybe, things will work out.

The bull has been let out of the china cabinet.

Welcome back to the lineup, Hornqvist! pic.twitter.com/48YuEPhl52

After a 3 game absence with a concussion, Patric Hornqvist returned to the lineup on the RW with Gene and Tanner.  Despite a very poor and bad and terrible game from the ZAR-Brassers-Phil! line in Colorado, they stayed together for the kids, as did the Electric Boogaloo line and the D pairings, sending Wilson, Sprong, and Ruhwedel to the pressbox and sending Rust to 4LW.  DeSmith vs. Stolarz in the pipes.

After Dumo was able to take the puck below his goal line and swing it out to 87 for the transition, Sid and his large adult son were off to the races on a 2v1 on Gostisbehere.

Watch Ghost here.  He has no idea what to do.  He starts like he’s taking the pass away, but then pivots to try to pressure Guentzel instead of forcing him to shoot.  Right as Bake recognizes that Ghost is pivoting, it’s game over, hitting 87 with the feed for the one timer.

That’s how quickly this team can strike.  They can be so goddamn deadly, you guys.

About a minute and a half later, Wayne Simmonds looked to jumpstart his floundering team, going after Oleksiak in the corner of the Pens zone.  Big Rig has never really been one to turn down a scrap, obliging with the Flyera winger.

With the Flyers winning the puck from the Pens as they had forwards committed down low.  Letang stepped in from the point as the puck kicked out to the slot, but that turned out to be a poor read and pinch.  It allowed Konecny to fly the zone up the right wing, marching unabated in on DeSmith, rifling a shot just over The Smith’s pad to draw level.

Somewhere in there, this happened because quite simply, the Flyers can’t help themselves.  If George Parros and the rest of the clown show DoPS actually gave a shit about player safety, this would, at a minimum, get reviewed.  Punch to the back of the head of a defenseless player, who just happens to be coming back from a concussion?  Garbage.

When the 2nd period rolled around, the Pens again came out swinging from a South Philly basement, caked in stale beer and sweat under half-lit turnovers.

First, Ghost tried to skate the puck out and move it into the neutral zone, but pressure from Grant on one side and Rust sealing the wall to prevent Weise from doing dick with the pass, Rust picked and fed Sheahan to chip it by Gostisbehere and slash in on Stolarz, clearing with the FAA for lift off and finding top cheese from in tight.

That’s a shot.  Sheahan doesn’t have too much in his repertoire this year, but that was sick.

Unfortunately, despite how sick that goal was, a minute later the Flyers were back on level terms.  Unable to get the puck out of their end of the ice, the Pens got caught running around with their asses out as the Flyers worked the puck up high.  MacDonald took it, had Voracek come right at him to overlap and burn Hornqvist at the point.  The Pens mostly watched Voracek skate in, opening up a lane for him to hit Giroux all alone on the back down.  Nothing DeSmith could do, but a lot the team in front of him could’ve done.

At the end of the day, the Pens had 4 of their 5 players below the faceoff circles.  The Flyers had just 3.  Inexcusable.

Then, as the 3rd period opened and Gudas remained in the box on a carryover roughing penalty, the Pens had a golden opportunity on their only PP of the game to get their noses back ahead.

Instead, they did the exact opposite.

After losing a puck battle behind the net, MacDonald chipped it around the boards to Laughton in support.  Phil!, Geno, and Sid were caught in deep, leaving Letang as the only guy back.  Hornqvist wasn’t able to get into the passing lane, which allowed Laughton to hit Weise streaking up ice, leaving Letang for dead and snapping a shot five hole on The Smith to effectively end this game.

The Pens created chances throughout the rest of the period, but simply weren’t able to solve Stolarz, eventually giving the puck away at the Flyers blueline to Couturier to chip it to Voracek with the net empty at the other end.  Letang looked like he had checked out, throwing a half-assed poke check at the puck as Voracek chipped it by him to nail the gimme goal.

The week ahead sees the Avs and Isles come to town on Tuesday and Thursday before heading to Ottawa, Canada on Saturday.  Get after it.  LGP.