Wilder and Fury fight to an exciting draw; rematch on the horizon in 2019 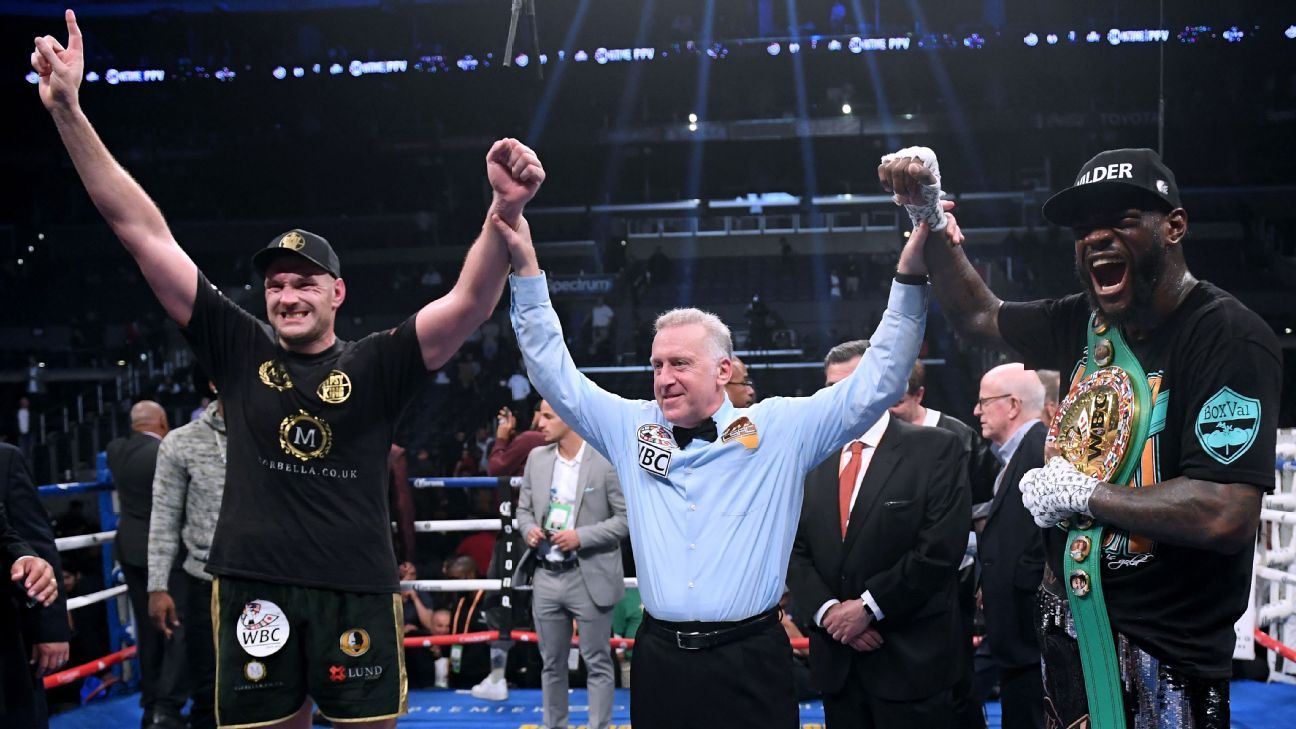 Wilder and Fury fight to an exciting draw; rematch on the horizon in 2019

LOS ANGELES – Heavyweight boxing champions Deontay Wilder and Tyson Fury revitalized the heavyweight division by delivering a classic championship fight. The fight had everything a real boxing fan could want mixed in with some WWE action.

“I think with the two knockdowns I definitely won the fight,” Wilder said. We poured our hearts out tonight. We’re both warriors, but with those two drops I think I won the fight.”

Wilder’s second knockdown instantly went into boxing lore when he landed a vicious right hand and followed with a left hook on the button to brutally knock Fury down in the twelfth round only for Fury to miraculously get up at the count of nine.

“I think someone laid hands on me and brought me back, rose me from the brink of defeat,” Fury said while laughing out loud after the fight.

The knockdown was so brutal everyone from Wilder’s manager Shelly Finkel, to Fury’s Hall of Fame trainer Freddie Roach assumed the spectacular fight was over with. No one expected Fury to raise up like he was no selling a finishing move in WWE at the count of nine to beat referee Jack Reiss’ count and save his lineal title.

Count Wilder’s promoter Lou DiBella among the huge faction of 17,698 at Staples Center that stood almost the entire fight, who also thought it was over.

“His eyes were rolled back in his head, but he popped up like The Undertaker,” DiBella said.

Despite not being known for his accuracy, Wilder was expected to land more punches but couldn’t seem to find the “Gypsy King” most of the night except for catching and dropping him in the ninth and twelfth rounds.

“Tyson is very slippery and it felt like he had baby oil on or something, but I came out slow and rushed my punches.,” Wilder said. “I started overthrowing the right hand, and I just couldn’t adjust.

“I was rushing my punches. That’s something I usually don’t do. I couldn’t let it go tonight. I was forcing my punches too much instead of sitting back, being patient and waiting on it. I really wanted to get him out of there, give the fans what they want to see.”

Despite all the talk about boxing being dead in sports circles the most significant heavyweight fight on U.S. soil since Lennox Lewis in his final fight stopped fellow Hall of Famer Vitali Klitschko in the sixth round of an epic slugfest to retain the title in 2003, delivered across the board and the fans were the winners. With the fight being an exciting draw, boxing fans are all but guaranteed to get to watch the two fighters many consider the two-best heavyweights in the world go at again in 2019.

“One hundred percent we’ll do the rematch,” Fury said. “We are two great champions. Me and this man are the two best heavyweights on the planet.”

Wilder added “I would love for [the rematch] to be my next fight. Why not? Let’s give the fans what they want to see. It was a great fight, and let’s do it again. It doesn’t matter to me where we do it.”