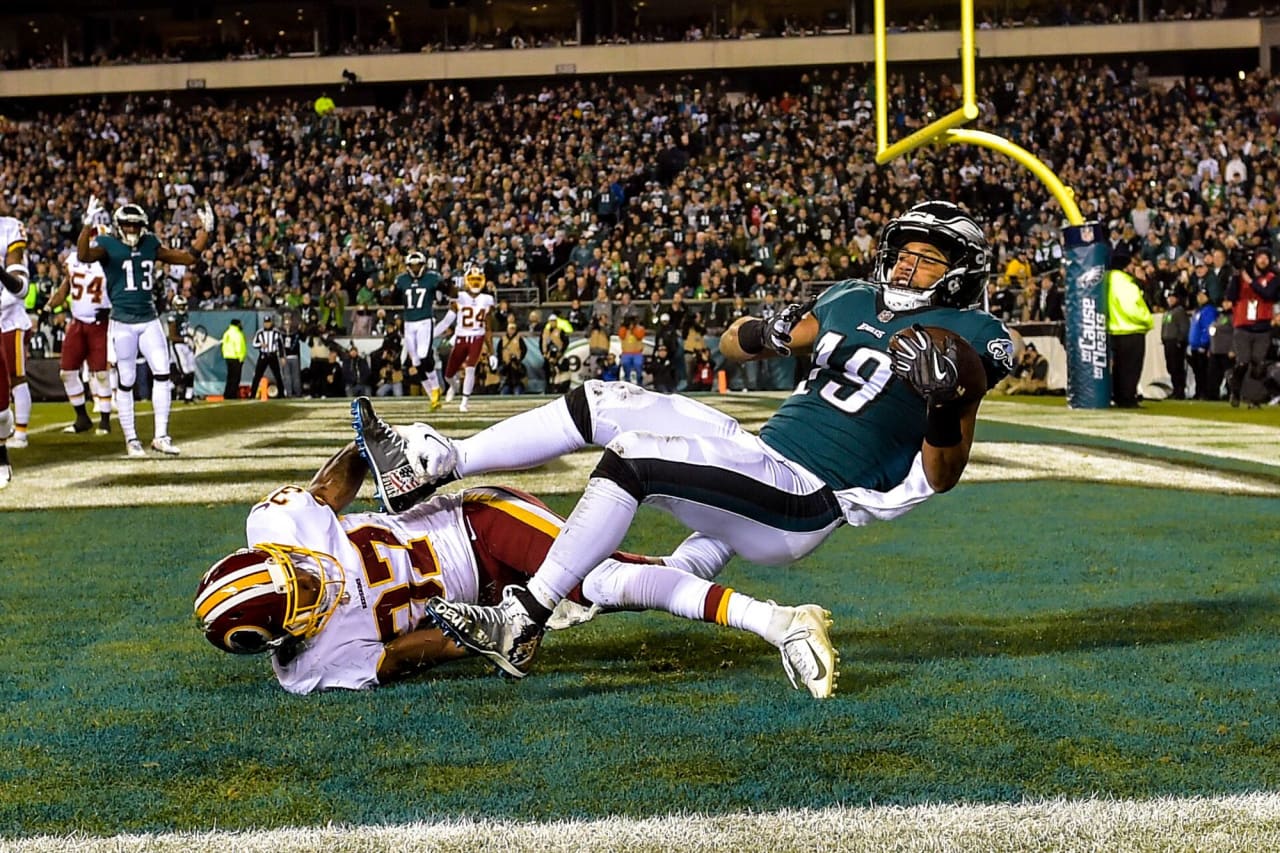 Wow. This game had everything—drama, melodrama, souls rising from the dead…In the end the Birds absorbed a major body blow from a 90-yard TD run on a handoff from Mark Sanchez to 33-year-old Adrian Peterson. How often do you get to write a sentence like that?

The statement play of the game, if you will, was a 14-yard grinding, winding run by Little Big Man Darren Sproles for a TD— but it was the lead blocking of 300-pound center Jason Kelce that made it happen. If you ever questioned the want-to of this offensive unit, just watch the replay of that touchdown run and focus on Kelce. Then, kindly if you will, CHUT UP!

That play was where the TKO talk began. Yes, Washington got some more shots in, making a few of our DB’s and LB’s look embarrassing in coverage, but then Colt McCoy (whom I like) suffered a fractured fibula on some kind of weird, twisted, unintentional consequence of a pressure from the Philly pass rush. That brought Mark Sanchez into the game (whom I still honor as holder of the highest single-season pass completion percentage in the history of the Birds). Mark got lucky with the initial playcall dish to Peterson, but after that, Mark was not up to the task. That’s understandable since he was only signed by the ‘Skins on November 19. Sanchez was having noticeable radio problems inside his helmet, too. The Eagles got to Mark just enough to throw him off the revenge/comeback script he wanted to write. Nate Gerry put the script to bed with a back-breaking INT off a fluttering (perhaps deflected) pass downfield by Sanchez. Major TKO factor there…pretty much game over.

Meanwhile Carson Wentz was reverting to his moving-pocket, throw-on-the-run, improvise-big-play days from his brief college career.

Associated Press description: “Carson Wentz ran around and extended plays the way he did before his knee injury.”

Wentz tossed two touchdown passes, Darren Sproles ran for a score and the Philadelphia Eagles stayed in the hunt for the NFC East title with a 28-13 victory over the depleted Washington Redskins on Monday night. The Eagles (6-6) won consecutive games for the first time since Nick Foles led them to a Super Bowl victory over the Patriots.

The Redskins (6-6) lost backup quarterback Colt McCoy to a serious right leg injury in his second game replacing Alex Smith (who broke his right tibia and fibula on Nov. 18). Mark Sanchez took his place. Redskins coach Jay Gruden said after the game that, from what he understands, McCoy fractured his fibula and will miss the rest of the season.

Adrian Peterson ran 90 yards for a touchdown on Sanchez’s first play under center, giving the Redskins a 10-7 lead. It was the longest run Philadelphia has allowed in franchise history but Washington’s lead didn’t last long.

Wentz, who hasn’t scrambled much since returning in Week 3 from surgery to repair two knee ligaments, didn’t run for any yards. But he was on the move quite a bit on designed rollouts and plays in which he improvised and completed passes.

Sproles put Philadelphia up 14-10 on a 14-yard TD run in the second quarter. Wentz tossed a 4-yard TD pass to Jordan Matthews and connected with Golden Tate on a 2-point conversion to extend the lead to 22-13 early in the fourth quarter.

The Eagles twice failed to score inside the red zone and still managed their second-highest point total this season. They had a first down at the Redskins 2 in the second quarter, but Josh Adams was stopped for a loss on fourth down from the 1. EYE don’t disagree with going for it there, but was a little disappointed that Doug didn’t call a more aggressive play, such as a play-action fake giving Wentz a roll-out option.

They had a first down at the Redskins 5 in the third quarter, but Wentz threw an interception to Josh Norman. The problem there was Wentz stared down his target right from the snap. I guess he thought he had the drop on Norman. Wrong!

Wentz finished 27 of 39 for 306 yards. He came out firing and led the Eagles to a score on their opening drive for only the third time season. Wentz saved the drive by scrambling out of the pocket, motioning Tate to go deep and loftong a 19-yard pass down the left sideline on a first-and-15. Wentz finished the drive by firing a 6-yard TD pass on the run to Tate.

Oh yeah, Golden Tate. EYE told you this was going to be the breakout game for Tate. It was. I’m glad.

Zach Ertz helped by moving the chains all night long. Zach Ertz broke Brian Westbrook’s franchise record for receptions in a season. Ertz has 93 catches and is closing in on Jason Witten’s single-season record (110) for tight ends. Westbrook had 90 catches in 2007.

The Redskins coverage was not horrible. It just got worn down. Eagles despite their coming up short in the red zone a few times at least ate up time of possession with sustained drives. By the 4-minute mark near the end of the 4th quarter, it was obvious the Redskins defense was gassed and had thrown in the towel. TKO.

Eagles: DT Tim Jernigan (back spasms) left in the first quarter and LT Jason Peters came out on the final series with an undisclosed injury. Looked like Peters got rolled up on from behind by incidental contact…

PHI
G. Tate7 REC, 85 YDS, 1 TD
Does this physical show of force by our Eagles (outweighing some shortcomings of execution on offense) travel well to Dallas? I am left to wonder only because the Cowboys are so much healthier than the Redskins across the board. This is setting up for a freaky showdown at Jerry World.