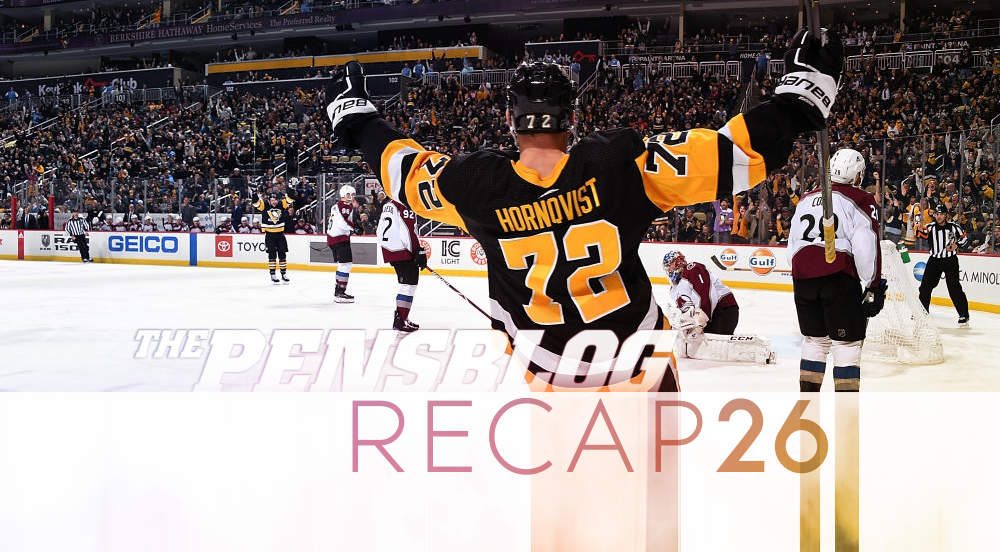 What in the holy hell is happening?

Just a week ago, the Avalanche blew a 3-0 lead with some help from Cole Harbour Nova Scotia’s Sidney Crosby’s natural hat trick, but the Avs managed to fight back to win 6-3 on home ice.

Days later, the Pens host the Avalanche, blow a 3-0 lead, but manage to fight back and win 6-3 on home ice, this time with the help of a natural hat trick from Patric Hornqvist.

Moreover, a week ago, the Pens controlled the possession game against the Avs to the tune of a 56.63% share of 5v5 shot attempts.

The NHL wanted parity and boy, did they ever get it here.

Nevertheless, the Pens got scoring from lines and players that did not include Cole Harbour, Nova Scotia’s Sidney Crosby, but did include Sollentuna Municipality, Sweden’s Patric Hornqvist.  They also pulled within 4 points of the 2nd Wild Card slot (with two games in hand) and two points of the 3rd spot in the Metro as the Islanders come to town on Thursday for the Battle for Third Place.

No changes to the forward group or goaltending that fell 4-2 to the Flyers on Saturday.  With Sprong no longer on this team, we have no need to announce in this space that he’s a healthy scratch.  That duty fell to Garrett Wilson, Chad Ruhwedel, and Juuso Riikola.

Newly acquired Marcus Pettersson immediately got to make his Penguin debut, coming at the expense of the aforementioned Riikola.  It kinda stinks because Riikola and Maatta, in the last 6 games in particular, have been stellar together and it feels like Riikola has certainly earned the right to stay in the lineup over the likes of someone else.

The Pens have ice the same 6 d-men for the last 5 games. Here is a list of those that have had at least a 50% share of 5v5 shot attempts, unblocked attempts, and scoring chances over that stretch:

No sense getting too jammed up about the daily lineup changes, but fuck, man.

Right off the bat, the Pens came out looking like a totally different team altogether; a team that seemed to spend the extra day off really sorting out the shit that has been ailing them.

And on the Electric Boogaloo Line’s second shift of the game, they opened the scoring with a little help from the 4th line.  Grant and Rust, giving chase to a loose puck that Barrie had to go all the way back to his own end to collect, forced him to reverse it the way that he came instead of moving it to Former Penguin Defenseman #28.  Can’t say I really blame him for not passing it to him!

Guentzel owned the wall coming off the bench, pinching in to force a turnover that Dumoulin held in at the point.  Letang galloped, hit the zone with speed and took the pass from his partner, sending Former Penguin Defenseman #28’s jock to goddamn Mercury before slipping a pass under Barrie for Guentzel to redirect home with his skate.

Kris fucking Letang, fam.  What a move.  What a player.  Get real.

It took the Pens just over 4 minutes later to double their lead, coming in the form of EverGene potting his first 5v5 goal in 15 games.

Off a set faceoff, he won it back to his Hornqvist as the trigger man.  His shot ended up on Pearson’s stick after Former Penguin Defenseman #28 blocked and poked it away.  Pearson’s follow-up shot blew Compher’s stick out of his hands, taking enough off the shot and changing its trajectory enough for Malkin to sneak his stick in and tip it by Comrade Varly.

And just 35 seconds later, the 2 turned to a 3.  Brassard lost the draw after the goal, forcing DeSmith and Oleksiak to deal with the Colorado dump in.  DeSmith went Full Flower, shoveling it to Oleksiak in a tough spot.  Big Rig dealt nicely with it, moving it up the wall to Phil! in support.  Phil!, though, turned it over and the Avs got it back in deep to Calvert, who got bodied and dummied by Maatta, giving the puck away to the Finn.  Jail break city and the Pens were off, eventually getting it in deep themselves.

In the corner, Phil! and Brassers burrowed in, outnumbered 3v2, but were able to pull it out and allow ZAR to get it to Maatta back at the at the point.  Colorado gave chase, but the focus was on Maatta teeing up a shot and not on Brassers slipping in behind to redirect the shot-pass home.

Great heads up play from Maatta and as nice as the shot-pass was, the D play he made on Calvert to start the play up ice was what made this all happen.

Maatta will get a lot of credit for the shot-pass on the Brassard goal, but the defensive play he made on Calvert in his own end is the reason the goal even happened in the first place. Bodies Calvert, steals the puck and gets moving up ice seamlessly. pic.twitter.com/I9M4UBsHyC

But about 5 minutes later, the Pens would head to their first PK of the night as Simon went off for hooking Landeskog.  Colorado was threatening, but the best PP in the league couldn’t find the back of the net until their 2nd unit got tossed out there towards the end, only to have their goal overturned for Soderberg interfering with The Smith.

As the second period opened, Simon was missing from the shitload of up and down action, having not played a shift after the 17:01 mark of the 1st.  Then, just 6:42 into the middle frame, Letang would get called for interfering with Rantanen as the Avalanche forward chipped the puck by 58.

This time, the Avs top unit would not be denied.  An initial point shot from Tyson Barrie was turned away to the corner, allowing the Avs to set back up while they worked it around the perimeter, after MacKinnon maybe got away with a hook on Grant.  When Rantanen picked up a pass from Landeskog on the half-wall, he knew what he was going to do: put it on a platter for Barrie to step into a bomb, burying it off the post and beating The Smith.

No chance for DeSmith.  What a shot.

A minute later and the Avs were within one.  The Pens did well dealing with a Compher rush shot, blocking it down and setting Letang up for the breakout.  As 58 skated it up, he had Pearson swooping down to get speed up the left wing wall.  Letang hit him with a pass, but had to keep it slightly behind Pearson to keep it from being a suicide pass.

Reeeeeally fortuitous bounce off Pearson’s stick, but what an odd ass bounce.  The puck was just floating, then Calvert, with position on Letang, lifted it up for Soderberg to chop out of midair and beat DeSmith.

Just when things seemed like they couldn’t get any worse, Crosby would get sent to the box for such a soft ass tripping call that it needed Imodium AD.

But while the Avs were looking to tie, the refs got the even up call by sending Rantanen to the box for interfering with Maatta.  And while both teams survived the 4v4, but the Pens did not survive their own 5v4.

What’s more is they looked the more likely to score, but a blocked Letang shot sent Bourque and Nieto up ice on a shorthanded 2v1.  Phil! got on his horse to backcheck, but Nieto just made him look silly, waiting for him to get level before cutting back inside and blowing a wrister through Letang, Bourque, and Letang.

As soon as the Avs came back, you just had the feeling they were going to blow the doors off the Pens in the 3rd and damn near did early in the period, but at the 5:47 mark, they gave the Pens a lifeline as Nemeth went off for slashing Crosby.

For as much as you can’t give this Avalanche team a PP chance, you definitely can’t give the Penguins one either when it matters most.

Once again, another minute passed before Hornqvist got himself back out on the ice and again, he was finding himself back on the scoresheet courtesy of Former Penguins Defenseman #28.  Tracking back to clean up a loose puck, Malkin hounded him, causing Former Penguins Defenseman #28 to just blindly throw the puck wherever the fuck he was throwing it.

Turns out, it was to Hat Trick Hornqvist.  Deeeecent.

Pens would see the rest of it out, getting us to that Fifth Ave. Party.  Hit it.

Big Boy Save from DeSmith to stop Jost from in tight. Not sure he knew much about it, but they all count. pic.twitter.com/iKPw5sW5Bt