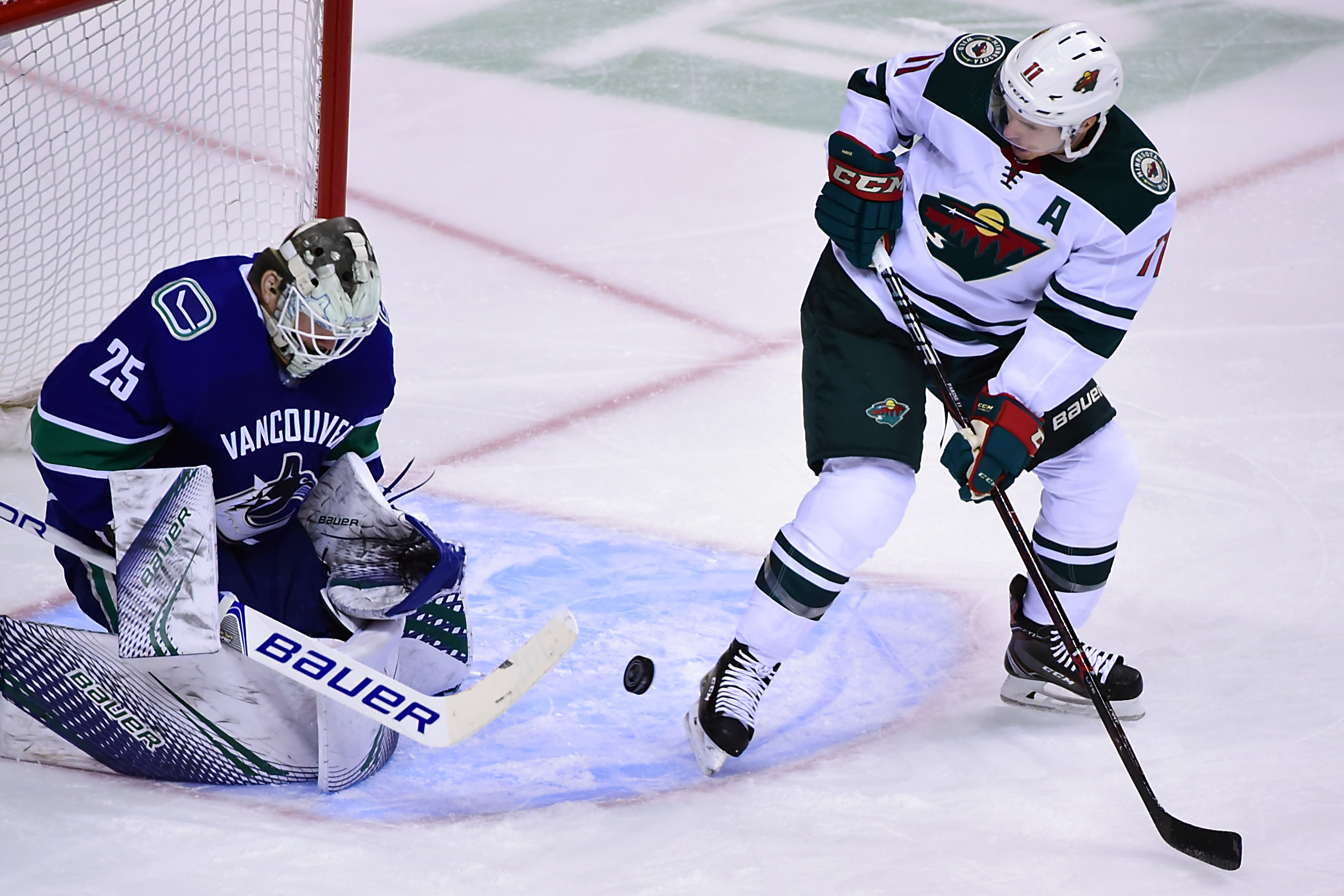 “I thought it was as good a game as we could play” was what Wild Head Coach Bruce Boudreau had to say about Saturday’s game, a 5-3 loss to the Toronto Maple Leafs.  Some Wild fans were not happy, as they felt it was a game that demonstrated some of the team’s most basic flaws in regards to its inability to finish on a plethora of prime scoring opportunities.

The Wild have split their games against the Canucks this season.  Minnesota is on a 3-game losing streak and they need to stop this free fall.  The Canucks embarrassed the Wild the last time these clubs met in Vancouver, can the Wild prevail this time around?

1st Period Thoughts:  The pace steadily ramped up from the initial drop of the puck as both clubs were hoping to get out to a fast start.  The Wild’s 3rd line of Jordan Greenway, Nino Niederreiter and Joel Eriksson Ek were flying around and causing some trouble in the Vancouver zone; sending lots of pucks on goal for Anders Nilsson to deal with.  The Canucks would try to counter with some speed of its own as Elias Pettersson turned on the jets to gain a little time and space before setting up Brock Boeser with a hard shot that missed wide.  Minnesota would go back on the attack, causing some trouble in the cycle as the 2nd line went to work, while they were able to work the puck deep they couldn’t seem to get the pucks into scoring areas.  The Canucks would break the stalemate after some lazy backchecking by Mikko Koivu allow Josh Leivo to get lost as Pettersson found him in the slot and the recently acquired winger rifled a shot that rang off the post and in.  1-0 Canucks.  Minnesota wound answer back a few minutes later on the power play as the Canucks gave Matthew Dumba tons of space near the point and he’d wire a slap shot that was deflected by Zach Parise and in.  1-1 game.  The Canucks would try to answer back with some good pressure of their own as Bo Horvat came dangerously close to returning the lead to Vancouver.  Minnesota would go on the attack a few minutes later as Eric Staal used his body well to protect the puck before sending a shot on goal that Nilsson stopped and Jason Zucker pounced on the rebound and Nilsson was able to cover it up for a whistle.  Pettersson would put on a show as he won a battle for the puck with Koivu and then buy a little time and space with a smooth move before firing a shot on goal that was gloved by Devan Dubnyk.  The period would end with both clubs knotted at 1-1, but it felt like the Canucks had the advantage in quality scoring chances even though Minnesota was outshooting Vancouver 7-6.  Coyle and Zucker need to pick up their intensity.

2nd Period Thoughts:  Minnesota did a great job of controlling the pace of play as they swarmed all over the Canucks zone through the first few minutes of the 2nd period.  The Wild would pepper Nilsson with all kinds of shots.  9 shots in a span of about 6 minutes as Minnesota had a bunch of prime opportunities including a great chance for Greenway from the slot.  Those missed chances invariably mean your team is going to scored on the other way and that’s exactly what happened but not without a little bit of drama first.  Moments before the Canucks scored the go-ahead goal, Vancouver nearly lit the lamp on a great play by Tim Schaller that was fought off by Dubnyk.  On the very next shift the Canucks would again get Minnesota on its heels and it was Tyler Motte gathering up a puck and sweeping a shot past Dubnyk who was flopping around like a fish.  2-1 Canucks.  Vancouver would then draw a holding penalty on Dumba giving the Canucks a great chance to add to their lead.  Fortunately the Wild penalty kill was assertive and not giving Vancouver much in the way of time and space and they’d escape unscathed on the man advantage.  The Canucks had turned the tables on the Wild, firing 10 shots on Dubnyk.  Greenway would draw an interference penalty on Alexander Edler.  The Canucks would put Minnesota on a 5-on-3 as Michael Del Zotto cross checked Parise in the back.  It would prove to be a very costly lack of discipline.  Minnesota would strike early in the 5-on-3 as they gave Suter plenty of time and space to cannonade a slap shot that may have been partially deflected by Zucker.  2-2 game, and then with over 1:30 left of power play time on Del Zotto’s penalty the Wild moved the puck well to set up Zucker a few times on the one-timer and the former Denver star would cash in on his 2nd attempt that beat Nilsson before he could get across the blue paint.  3-2 Wild as Vancouver bench boss Travis Green looked on in disgust.  The Wild would give a power play right back as Greg Pateryn delivered a hard hit to Jake Virtanen behind the Minnesota goal that had him feeling pretty miserable.  Pateryn would get 2 minutes for boarding which annoyed the somewhat sparse home crowd which was wanting a double-minor or more.  Dubnyk would swim in his crease a bit in the closing seconds of the period but he’d come up with the puck to allow the Wild to keep their 3-2 lead going into the 2nd intermission.

3rd Period Thoughts:  Vancouver started the 3rd with 1:27 of Pateryn’s penalty left to be killed off.  The Wild seemed mostly content to work pucks deep in the Vancouver zone and force the Canucks to waste a lot of time retrieving the puck.  Minnesota did try to attack a bit as Greenway did a fine job of using his size and strength to protect the puck as he made a power move towards the Canucks’ crease.  A few minutes later it was Zucker setting up Staal for a chance from the high slot that he fired high and wide of the mark.  The Canucks was certainly making more of a push for the equalizer and they’d get a golden opportunity when Jonas Brodin‘s point shot was blocked by Pettersson who quickly turned on the jets for a partial breakaway but his snap shot bid was gloved by Dubnyk.  Dubnyk would come up big with a couple of big saves over the next few minutes to keep Vancouver at bey.  A lazy tripping penalty by Zucker would give the Canucks a big opportunity on the man advantage in the latter half of the period.  Minnesota’s penalty was extra aggressive and Vancouver was not able to get set up comfortably in the offensive zone and the Wild came up with a big kill.  The Wild would go into lockdown mode, stepping up to deny time and space and working pucks deep and forcing the Canucks to waste time it didn’t have trying to get set up.  The Canucks would pull Nilsson for an extra attacker with about a minute left and they’d come dangerously close to tying the game as Boeser had a chance in close but he’d fire the puck over the crossbar and Minnesota would prevail 3-2.

It was a playoff-like atmosphere in Loveland, Colorado for the 2nd game between the Iowa Wild and Colorado Eagles.  Colorado would break the seal as Tyler Lewis scored just 8-minutes in.  The Eagles’ would add to their lead a few minutes later as A.J. Greer found the twine behind Kaapo Kahkonen.  Iowa would really pour it on in the 2nd and it appeared as though they just could get anything by Pavel Francouz, but Luke Kunin got a little space and he’d rifle a shot by the Colorado goalie cutting the lead to one.  Iowa continued to carry the attack into the 3rd period and their persistence would pay off as Dmitry Sokolov would turn and fire a laser of a wrist shot that surprised Francouz to tie the game at 2-2 sending it to overtime.  In overtime, Iowa again dominated the play and drew a power play with about 2 minutes left.  Iowa peppered Francouz with shots but he was rock solid, and Justin Kloos thought he had it with 2 seconds left but his shot would ring off the post sending the game to a shootout.  Kahkonen and Francouz were terrific in overtime stopping all of the first 3 shooters they faced.  This gave Kloos a chance to give Iowa a shootout lead and he’d bury it.  Then A.J. Greer’s bid would ring off the post and Iowa would prevail 3-2.  Kahkonen had 24 saves in the victory.