Breaking Down the Paul Goldschmidt Acquisition for Cardinals 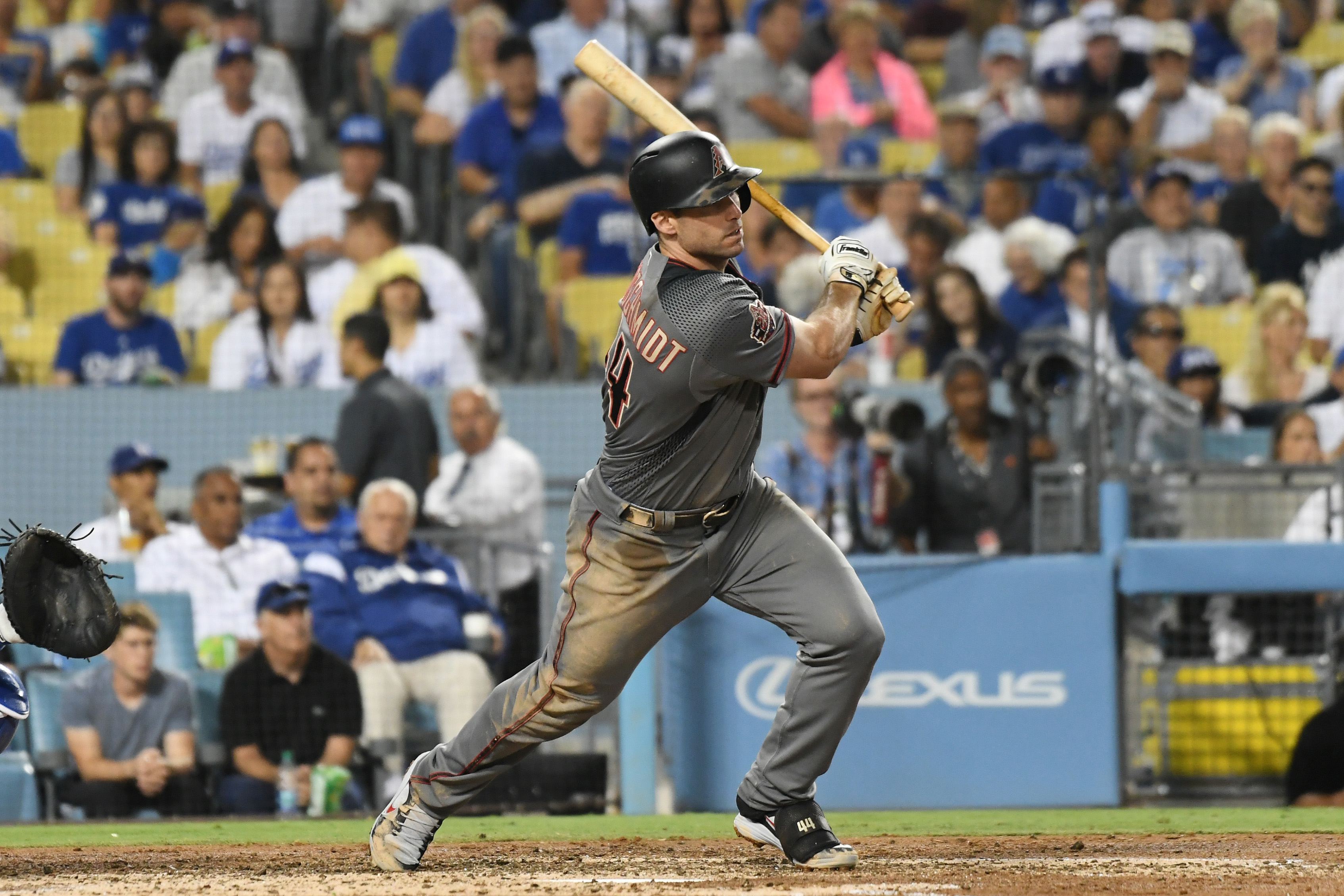 Breaking Down the Paul Goldschmidt Acquisition for Cardinals

Let that sink in.

Before you get greedy and jump to “ok, now get Harper, too,” take a few minutes to focus on the fact that the Cardinals just acquired one of the 5 best hitters in baseball.

He is, without a doubt, the best all-around hitter the Cardinals have had since Matt Holliday‘s last fully healthy year in 2014. He is arguably their best hitter since Albert Pujols.

John Mozeliak has not lost his fastball, folks.

He did not re-sign Matt Adams to play 1B or grab Mike Moustakas for 3B.

He got Paul Goldschmidt.

So let’s unWrap this gift.

The acquisition cost was low. The Cardinals were able to move Luke Weaver, Carson Kelly, and Andy Young in the move along with a compensation round draft pick. Weaver had fallen to the fringe of the roster with his 2018 performance. A fully healthy pitching staff probably would have forced him back to Memphis in 2019. Carson Kelly was ticketed for backup duty behind Molina, which is no place for a young player. For the Cardinals, they have Andrew Knizner coming behind him with Yadi, obviously, ahead of him. Kelly was stuck, making him expendable. Young is an interesting prospect, but he doesn’t hurt to move. And on the salary end, Goldschmidt makes just $14.5 Million in 2019, a bargain for one of the game’s elite. Dexter Fowler will make more.

Goldschmidt is the first clear-cut #3 hitter the team has had since prime Matt Holliday. I maintain that Matt Carpenter‘s numbers, over a full season, would balance out as a 3 hitter, but here’s the thing…we don’t have to argue about that anymore. Goldschmidt is the tent pole. Write his name in ink in the 3-spot and allow a lineup full of support pieces to naturally fall in-place. Carpenter can remain as one of the games elite lead-off hitters. A possibly resurgent Dexter Fowler or Jose Martinez can file in ahead of Goldschmidt, followed by the powerful (but not cornerstone) bats of Ozuna and DeJong. Molina, Wong, and Bader can polish off a deep lineup. You no longer need to force Molina into a premium batting slot or rely on Martinez or Jedd Gyorko to hold up the middle of your lineup.

Although he is not a left-handed hitter, “Goldy” significantly improves the Cardinals when facing right-handed pitching. This was a major issue for the Cardinals, whose RH-heavy lineup was quite dangerous vs. LH in 2018, but not so much vs. RH. As my colleague Adam Butler pointed out in a recent post, the Cardinals took the 4th most plate appearances in the NL vs. RHP in 2018 yet ranked just 8th best in wOBA at .313. Conversely, their .325 wOBA vs. LHP was ranked 3rd. They need to improve overall against RHP, regardless of which side of the plate the player hits from. Goldschmidt brings a career wRC+ of 137 vs. RHP. Among active players with at least 600 PA’s since 2011, that ranks 17th in baseball. Among RHH, he ranks 6th. He is among the best of the best at hitting RHP.

He is a perennial MVP-candidate. This is not just lip-service. Goldschmidt has finished in the Top 3 of MVP voting on 3 occasions, as well as a 6th and 11th place finish. In terms of fWAR, he has been a 5 win player or better in 5 of the last 6 seasons. The year he wasn’t, his season was ended after 109 games by a broken hand. He finished with a 4.3 WAR. Over the last 3 seasons, only Matt Carpenter’s 2018 (5.0) and Tommy Pham‘s 2017 (6.1) performances could top Goldschmidt’s 6-year low point. This is simply a caliber of player that was not on the Cardinals’ roster prior to this trade. Since his first full year in 2012, he ranks 4th among active players in total fWAR, 5th in wRC+, 5th in OPS, and 5th in wOBA. Remove a fading Miguel Cabrera from those rankings, and you are easily talking about one of the 4 best hitters in baseball. Stud.

He improves the team’s baserunning. Goldschmidt has been a sneaky good base-stealer in his career. He has topped 15 steals on 5 occasions, peaking at 32 in 2016. We’re not talking about Vince Coleman here, but he adds something in this department. Kolten Wong has the most prolific SB season on the active roster with 20 steals in 2014. He hasn’t topped 15 since 2015. Harrison Bader stole 15 last year to lead the team. Since he is not a speedster, Goldschmidt’s stolen base proficiency is tied to baserunning intelligence and ability. Over the last 3 seasons, he ranks 20th in baseball in Fangraphs’ Baserunning Runs metric. He is just one of the best baserunners in the game. That is a very welcome addition for a team that has suffered in that area over the last few years.

Now there is some shuffling that will occur as a result of the Goldschmidt acquisition. Matt Carpenter should be shifting to 3B permanently after splitting time with 1B in 2018. Carpenter will be fine, not spectacular, at 3B. The concern is that, although Goldschmidt brings an elite level of defense to 1B, it will be negated by the move of Carpenter to 3B. That could be true, but even so, this is a wash defensively. An infield of Carpenter, DeJong, Wong, Goldschmidt is likely very close, overall, to one of Gyorko, DeJong, Wong, Carpenter. One aspect that the Post-Dispatch’s Derrick Goold has brought up in recent radio spots is that Goldschmidt bring the ability to steal some outs at 1B, scooping throws and making more difficult catches on imperfect throws. Catches that Jose Martinez and even Matt Carpenter were not making last year. This benefits the infield as a whole.

This deal is not completely perfect. Although you didn’t have to give up anything of great consequence to acquire Goldschmidt for a season, the issue is just that. You only have him, guaranteed, for one season. The general consensus is that the Cardinals hope to recapture the magic of the McGwire, Edmonds, Rolen, and Holliday trades in which they parlayed the exposure to St. Louis’ baseball environment into long-term contracts. However, it’s no certainty that this will happen and the Cardinals run a major risk that, at the end of the 2019 season, they will be in the same position they were before the trade, searching for the cornerstone player. Oh, and they will also be facing the free agency of Marcell Ozuna, simultaneously. That is a gamble.

On the flip side, if you do re-sign him to play after 2019, you will be paying premium money for his age 32 season and beyond. The team has talked with trepidation about the “out years” on a long-term contract for a player, such as Bryce Harper. However, the out years on a 10-year Harper deal would be ages 32-36, the same years that you would theoretically sign Goldschmidt for. The only way to balance the argument would be to believe that the money you would pay Goldschmidt from 32-36 would be significantly less than the back-end of a Harper deal. Otherwise, it is a little bit of hypocrisy.

The cons, however, don’t affect the on-field product for 2019.

The Cardinals are not done this winter. They still need to address the left side of the bullpen and they badly need a LH bench bat that poses some sort of power threat. They also still retain a ton of financial clout. Fiscally, they could still make a major splash in the form of Bryce Harper. And they should absolutely still be in game for him as a long-term play.

However, and maybe this could be under the cons, one more negative to this deal is that it reduces the chances that the Cardinals make an all-out effort for Bryce Harper. They may still hang on the outside of those talks and see if there is an opportunity for them to pounce, but getting Goldschmidt takes away the “Harper or bust” factor.

Now, that being said, I am never ever going to complain about the Cardinals acquiring an ELITE player.

And that’s what they did.

I am ecstatic to have Paul Goldschmidt.