Lindholm, Smith and the Flames Too Much for Wild in 2-0 Loss 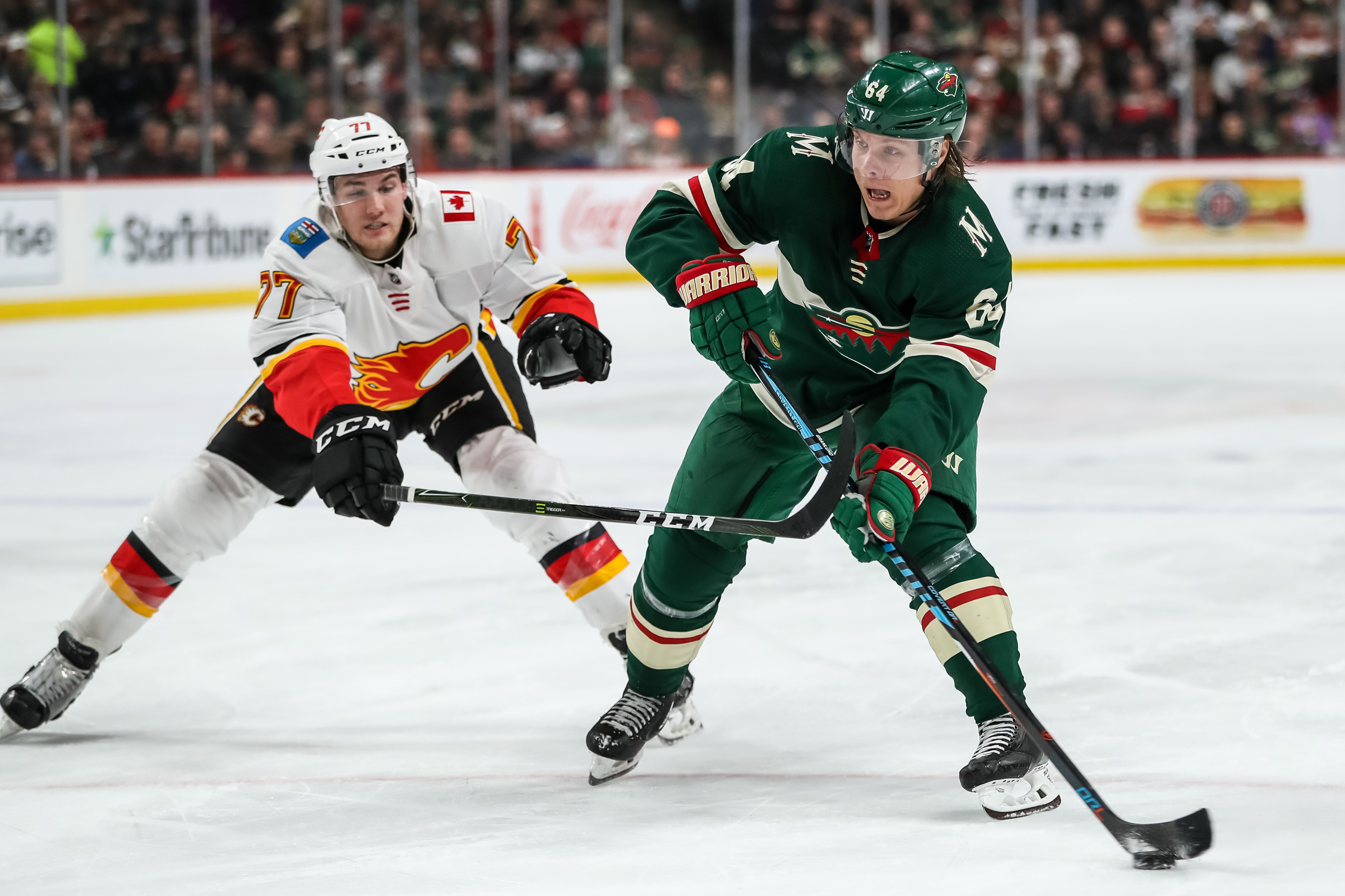 Lindholm, Smith and the Flames Too Much for Wild in 2-0 Loss

Scoreboard watching is pretty natural throughout the sports season, and most nights you are keeping your focus on the other teams in your favorite club’s division.  Did they win, did they lose, is there a chance to leapfrog some team?  Yet at times, it can also be a bit disconcerting.  As I was watching the Wild / Canucks game on Tuesday I couldn’t help but notice to see a crazy hockey score; Calgary 9, Columbus 6.  Then it hits you, oh, that’s who the Minnesota Wild play next and suddenly you are not marveling at its novelty as you are concerned about the fact your club has never scored 9 goals in a game, ever.

Calgary is unlikely to light up the Wild for 9 goals tonight, but it gives you caution as Minnesota faces off against another high-powered offense.  Can the Wild avoid a Flame out in Calgary or will the end up getting burned?  (I know, too easy)

1st Period Thoughts:  The Wild would discover the Flames’ tremendous team speed early as Johnny Gaudreau got a step on Ryan Suter and he raced toward the Wild goal on a breakaway.  Alex Stalock would bait him by offering him a shooting window 5-hole that he immediately took away when ‘Johnny Hockey’ tried to thread the needle to make a fine save.  A few shifts later, Stalock would make a nice blocker save on Mark Giordano.  Minnesota was finding itself pinned in its own end of the ice, as the Wild failed at a number of attempts to clear the zone.  The Flames’ pressure drew a a power play and they continued to pile on prime chances as Matthew Tkachuk hammered a shot that rang off the post and the puck would slowly roll out of the crease and Minnesota was just able to sweep it away in time before it was tapped in.  As Stalock tried to recover the puck was worked back out to the point, Sean Monahan would fire a shot that the Wild goaltender stopped and covered.  The Wild would get the kill, but Minnesota had difficulty doing much with the puck out of their own end as errant passes fanned shots squandered potential scoring chances.  Mikael Granlund would pull the trigger that Mike Smith knocked down, but unfortunately Eric Staal couldn’t reach.  A few minutes later the Flames again had the Wild chasing them around their own end before T.J. Brodie set up Elias Lindholm for a one-timer that blew by a partially screened Stalock.  The Wild would challenge the play saying it was offsides, and the magnified view clearly showed white ice between the puck and the blueline and the officials agreed saying it was no goal.  Still a 0-0 game.  The no goal call gave the Wild a little bit of a reprieve and they’d go back on the attack.  The Wild would earn a power play as Giordano cross checked Jason Zucker.  The Flames were very aggressive at taking away time and space from the Wild on the power play.  Minnesota finally was able to get some space as they set up Zucker for a one-timer that he fired up high that stung Smith as the blocked the shot with his shoulder.  The power play came up empty but you could sense the Wild were getting a little annoyed as Staal would get tangled up with Mikael Backlund and the period would end with both clubs still scoreless.

2nd Period Thoughts:  The Flames would strike early with the ice more open 4-on-4 from Staal and Backlund’s penalty as Lindholm ripped a shot off the rush that beat Stalock high stick side.  1-0 Flames.  The Wild tried to answer back with spinning backhand shot by Smith who gloved the attempt out of the air.  The Flames were super quick to transition to offense whenever the Wild were pinching with their defense as Rasmus Andersson who ripped a shot that rang off the post and out of play.  The Wild struggled mightily to generate speed going into the Calgary end, all too often when they did set up a shooting opportunity Smith was making it one-and-done as he collected the puck and forced a whistle.  J.T. Brown would get a weak elbowing call in the middle of the period and the Flames looked to capitalize on the man advantage early.  The Flames raced into the zone off the rush and Monahan slid a pass back to Gaudreau who tried to dangle a shot in but Stalock got just enough of it to allow it to cross through the crease and no damage was done.  Stalock would then deny Tkachuk from close range while Minnesota’s defense battled fiercely around the crease.  The Wild would get another big kill and shortly thereafter Zucker was tripped up by Noah Hanifin giving Minnesota its 2nd power play of the game.  On the man advantage the Wild were able to set up Matthew Dumba for a few blasts from just above the right faceoff dot that he stepped into that forced Smith to make a great redirection save with his glove.  The Wild would dodge a bullet late in the period on an absent minded no-look backhand pass by Eric Fehr in the closing seconds that went to Brodie who fortunately fanned on a shot that forced Stalock to make a stretching save.  The Wild had to feel fortunate to only be trailing 1-0 going into the 2nd intermission.

3rd Period Thoughts:  Early in the 2nd period, Jordan Greenway would get caught deep in the Flames’ zone and an absent-minded back check by Joel Eriksson Ek allowed Lindholm to be left all alone as a trailer.  Lindholm moved in and got Stalock to drop to his pads and he fired it by the Wild goalie and give Calgary a 2-0 lead.  Minnesota tried to claw its way back into it and the Wild would draw a penalty as Giordano tripped up Koivu that drew the ire of the Wild captain who felt it was knee-to-knee hit.  Koivu would skate by the Flames penalty box and serenade Giordano with some more angry words before heading to the locker room.  On the power play the Wild set up some quality opportunities as Granlund fired a laser of a wrister that Smith held onto.  Minnesota would move the puck well and set up Zucker for a one-timer that he fanned on and the Wild would again come up empty on the man advantage.  The Wild couldn’t connect on passes and so many rushes never got going as the Flames appeared a step or two ahead.  Minnesota would pull Stalock with nearly 3 minutes left in the game.  The Wild didn’t have much luck with the extra attacker as errant passes and good active sticks by the Flames had Minnesota chasing the puck rather than firing shots on goal.  Minnesota was getting frustrated and he’d obliterate Backlund with a big open ice hit that drew the ire of the Calgary bench.  Moments after that Ryan Lomberg would exit the Flames’ bench and he’d go after Dumba who more or less turtled and took punches.  Lomberg would get booted for his mugging and the Wild would receive a limited power play.  Even with an extra man, the Wild couldn’t manage more than a few token shots that were easy stops for Smith and the Flames would prevail 2-0.

~ Attendance was 17,690 at Scotiabank Saddledome.

Let’s Play Hockey has released their new rankings as of December 5th, 2018.  Here are the top 10 for both Boys and Girls in Class A & AA.