As you can see from the chart above Billy Eppler clearly emphasized team defense and run prevention over batter’s box production last year.

Heading into the off-season, the Angels have parted ways (at least temporarily) with excellent defensive backstop Martin Maldonado and are now in the position of finding a replacement, primary catcher.

Because Eppler clearly values defense behind the dish, controlling the running game, and pitch framing, our next choice will need to be at least average or better with at least two of those skills and perhaps all three. None of our current catching prospects or players appear to fully meet these needs as a primary, full-time catcher, although they can and will be backup receivers.

Beyond the defense, catcher represents a position that the Angels could improve offensively as well, so if Billy can acquire or sign a good defensive backstop with a competent bat the Angels can significantly or at least incrementally improve at this spot in the lineup. However, there is a real likelihood with Maldonado gone that the team will downgrade to some degree defensively so this is a balance Eppler will have to strike in finding a replacement.

In order to understand what may or may not be available we need to build a list of candidates and since defense is always a priority over offense for Eppler we will begin there.

Below is a parsed out list of catchers with a minimum of 50 Games (G) played, from 2016-2018, sorted by FanGraphs ‘Def’ on a per game basis (to level the numbers out as a rate statistic) with only those backstops with 0 or greater ‘Def/G’ and -0.1 or greater ‘Off/G’ because we are making the assumption that one is valued more than the other in our search:

It is patently clear why the Cubs kept David Ross around for so long because even in his last year he was a defensive wizard. You also see why the Angels signed Rene Rivera to platoon with Maldonado because he too consistently picks it behind the plate. To get to the heart of the matter, which is whom the Angels may target in free agency or trade, you need to move a touch further down the list.

Willson Contreras is both defensively sound and is a plus on offense. However he still has four years of team control and the Cubs would have to replace his production so unless they have their eyes set on J.T. Realmuto or perhaps another preferred target, the Angels potential acquisition of Contreras is unlikely, particularly when you consider the price the Angels would have to pay.

Lucroy is certainly available and despite his down year offensively he would probably provide a slight boost in the batter’s box over the Angels collective 71 wRC+ for 2018. He has been a slightly below average pitch framer and an average catch and throw guy his whole career. His defense has always been strong and he would likely be available on a 2-3 year deal. Not an ideal solution but not a terrible one either.

Behind him on the chart is another interesting name, Salvador Perez. The Royals control him for another three seasons for a combined $39.6M. It is a hefty contract but Perez has perennially been an excellent defender and the Royals are not going anywhere soon in terms of competitiveness. Perez like Lucroy also had a down year offensively but he carries a career 97 wRC+ and that would be a huge improvement for the Angels in the batter’s box. Salvador’s one big weakness is his consistently terrible pitch framing skills which would likely cost the team in terms of run prevention. He should not cost a lot in trade and his salary is elevated but manageable.

Mike Zunino was available but the Mariners chose to partner with the Rays rather than send him to an A.L. West rival which is understandable on some level. He would have been a good short-term solution.

Next on that list is everyone’s favorite trade target, J.T. Realmuto. There is a lot to like about him and he brings a presence on both sides of the ball with two years of arbitration control. J.T. would definitely fit the budget in terms of payroll but he will command a strong prospect package including one of our top prospects. The advantage of trading for him now is that you could potentially extend him long-term. If Eppler can acquire him without giving away one of Adell or Canning then he should do it. A package of Brandon Marsh, Jose Suarez, Matt Thaiss, and Trent Deveaux might get it done but do not hold your breath. As a final note, Realmuto has consistently been a poor pitch framer, which is a hidden negative about him not often discussed.

Gary Sanchez is another name that ranks highly on both offense and defense but unless the Yankees have their eyes set on J.T. Realmuto, which would be a downgrade according to this list, he is unlikely to be moved unless he brings back value that New York prefers. On top of that Gary would cost a fortune in terms of acquisition cost which would break the bank for the Angels in all probability.

Behind Realmuto and Sanchez, another popular name, Yasmani Grandal, appears. He is a free agent and will likely command a 4-5 year deal at approximately $16M-$20M per season, based on how the market plays out. He is excellent with the bat, plays good defense and has excellent pitch framing skills. However, that investment would take up a significant chunk of our off-season budget so unless Eppler has other low-cost alternatives at other positions of need, signing Grandal may be out of our current capacity. Good target to acquire but hard to fit into our payroll, will cost us draft pick compensation, and has a history of PEDS use, too. It should be noted that the non-tender’s of Parker and Shoemaker could have been to free up payroll for a move such as this.

As you continue down you see other names of interest including Francisco Cervelli, Buster Posey, Alex Avila, and Wilson Ramos.

Cervelli checks off a lot of boxes but he has a PEDS history that should be worrisome to any team trading for him while Avila can hit RHP well and has an above average defensive reputation, including pitch framing.

Posey would be an interesting target if not for the fact that his salary each of the next three years is about $22M per season. Also he has a history of concussions that would worry any team acquiring him. He would bring an impact bat and quality defense behind the dish but he will also be 32 to start 2019 and the Giants would have to kick in some money to convince any team, much less the Angels, to deal for him. The prospect cost would be light though.

Wilson Ramos is really interesting, primarily because of his bat. He has just enough defensive capability to pair with his batter’s box skills to be a real threat in our lineup and not a liability on the field. Because of his batting skills he could even pick up some time at 1B or DH potentially as well. Ramos will likely command a 3 year deal at about $10M-13M per season, which is doable for Eppler’s projected payroll. Wilson is also a slightly below average pitch framer.

There are certainly other names the Angels could potentially target. Robinson Chirinos had an option year left on his deal with Texas and they mysteriously non-tendered him, shoving him into the free agent pool where the Astros subsequently snatched him up. Chance Sisco has interesting bat potential but is raw defensively. Russell Martin might be a decent stop-gap measure or the Angels could pursue Evan Gattis, Blake Swihart, or perhaps Austin Wynns.

As a final note, when you look around the League there appears to be a real scarcity of top-tier catching talent right now and at a quick glance the pipeline of talent in the Minor Leagues overall does not appear promising. This may lead Billy Eppler to pull another “Andrelton Simmons moment” out of his pocket and pay for a guy like Realmuto or Grandal simply because of the opportunity costs involved and the lack of readily good, available options in the future.

Clearly the Angels need a primary catcher and have no reasonable in-house solutions. Fortunately the market does have some answers but Eppler may have to expend some significant resources to acquire one and is quite likely to do so sooner rather than later.

Personally if the Angels can acquire one of Grandal, Realmuto, or Ramos we should be in reasonably good shape behind the dish.

However, personally, if J.T. cannot be acquired or Grandal signed, I really like Wilson Ramos as the main target. At about $10M-$13M per season over a short contract he should provide just enough behind the plate while bringing a tremendous amount of firepower to the offense.

Over the last three seasons he has carried a wRC+ of 144 versus LHP and a wRC+ of 112 against RHP. For a team that needs to improve against LHP in the batter’s box, he brings a lot to the table. This does not even take into consideration pinch hitting in the late innings of a game where Wilson will find himself a significant amount of the time nor does it consider the possibility of Ramos playing a touch of first base or hitting out of the designated hitter spot a few games a year which the Angels may need him to do considering the health status of both Ohtani and Pujols heading into 2019.

Arguably the best bat available, an above average defender, good catch and throw, and slightly below average pitch framing, Ramos feels like the gamble the Angels need to take. There is some injury history here with his knees so it is not a surefire choice but in an off-season with multiple needs Wilson feels like the best option if Eppler wants to keep the farm system intact by avoiding a Realmuto trade or, to a lesser degree, a Grandal signing. 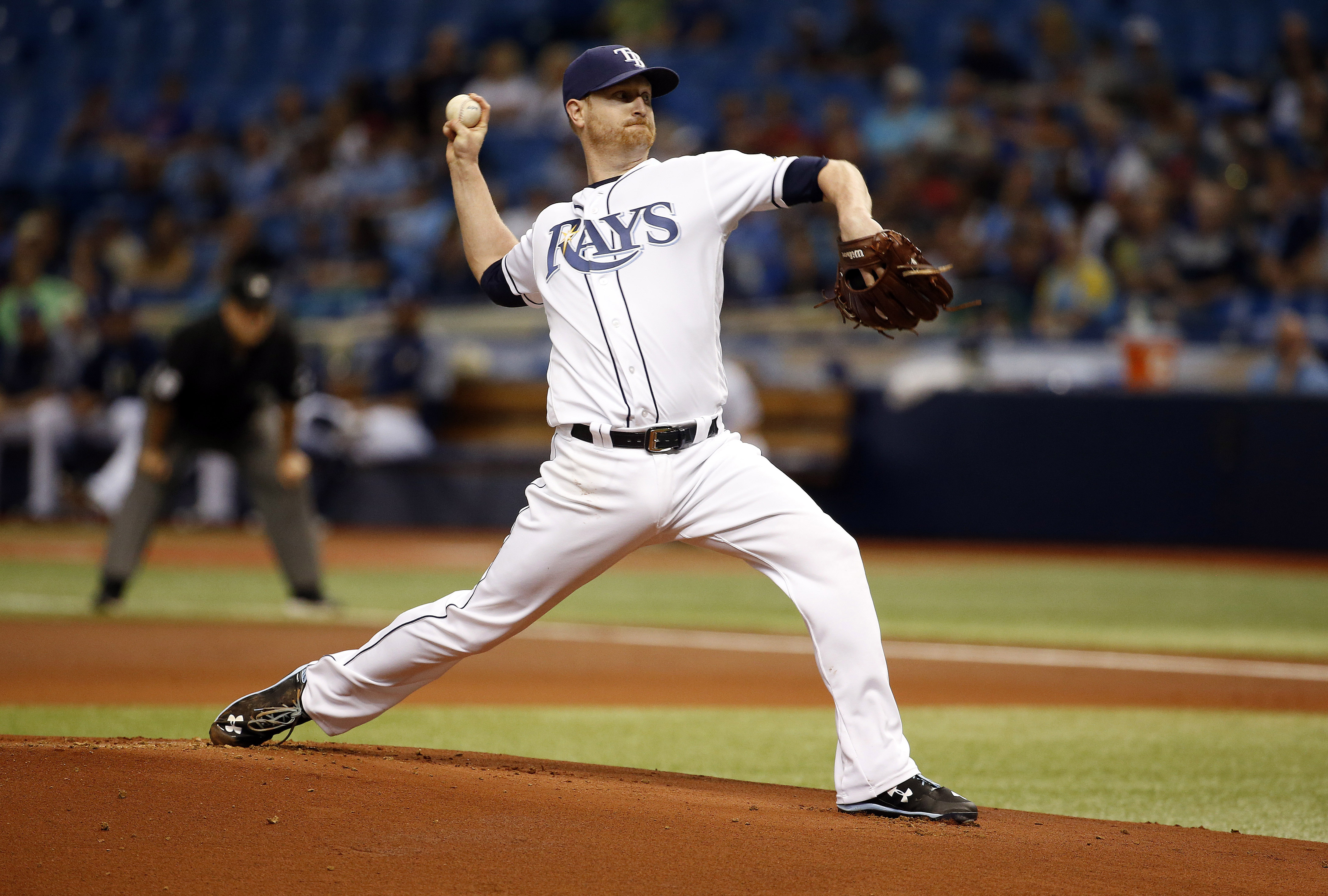