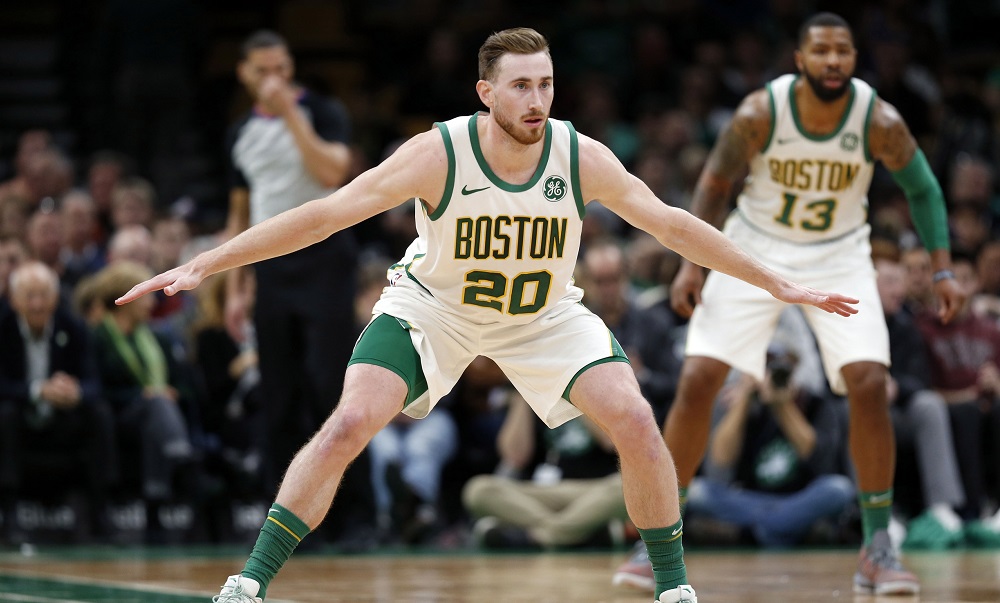 Consider this: Since the Celtics shifted Hayward to a reserve role on Nov. 19, Boston owns the NBA’s best offensive rating at 115.8 points per 100 possessions and the third-best net rating in that span at plus-9.6. Individually, Hayward owns the best net rating (+16.9) on the team for that eight-game span, ahead of even Kyrie Irving (+16.1).

The Celtics have a long lineage of great sixth men and there will be a temptation to keep Hayward on the bench — his team-high $31.2 million salary notwithstanding — should the team keep winning. There’s little reason for coach Brad Stevens to tinker now when the team is playing some fantastic offensive basketball (even if the team’s recent offensive explosion has maybe caused a bit of defensive slippage, which is natural when a team is generating points at such a consistent rate).

Hayward’s progression is huge for the Celtics and key to how good they can eventually be this season. That Minnesota game was a glimpse of what Hayward might more consistently be able to produce later in the season but it’s clear he’s impacting winning now with his Swiss Army skills.

No one ever saw this coming, but what if Hayward turns out to be the opposite of Isaiah Thomas?

As we all know, IT came to Boston as a reserve, and we were a bit heated when he didn’t win Sixth Man of the Year. The following season, injuries to other players opened the door for Isaiah to start. The next thing we knew, he was making All-Star teams and dropping 50-plus points while becoming the King in the Fourth.

With the current squad, we’re learning that it truly doesn’t matter who starts, because everyone is going to get their opportunity (eight Celtics average between 22 and 32 minutes per game). So wouldn’t it be crazy if Hayward shines brightest as sixth man? It will probably only be for this year, while the present rotation is working, but as they say, if it ain’t broke, don’t fix it.

John Havlicek (no. 17 in the rafters) had a Hall of Fame career in Boston, and he first made his mark as a dynamic bench player. His effectiveness as a sixth man popularized that role around the league to the extent that – five years after Havlicek retired – the Sixth Man award was established. There are similarities between Havlicek and Hayward: versatile, athletic forwards who shoot well from everywhere, can create good shots for teammates, and are strong defensively.

Havlicek never had the opportunity to win 6MOY. But Hayward is looking like a very good candidate.

On Page 2: The benefit of rest

If you noticed an additional burst — more energy — in Al Horford during Thursday night’s win over New York, you’re not alone.

The Celtics center felt the surge too after playing for the first time in five days, and in only his third game in 10. Horford has been nagged by pain in his left knee early this season, and has had to have his playing time managed earlier than usual.

Horford was an early force against the Knicks, scoring the team’s last 11 points of the second quarter, twice hooking up on lobs from Marcus Smart. He finished with a 19-point, 12-rebound double-double that was his most productive overall night of the season.

“Four or five days off will get you that,” he said.

Horford has averaged 18 points over his last three games — easily his most prolific stretch of the season, and a testament to improved health in his knee.

The only thing that’s a bit of a mystery is the cause of the soreness.

“I’m really not sure. The knee is irritated,” he said. “It’s not holding me back, it’s not limiting me and it’s not getting worse.”

Let’s totally ignore that last part, that Horford and the medical staff don’t know what exactly is causing Al’s sore knee, because no good can come from an older player developing a mystery malady.

When you get older, it’s common to suddenly feel a pain for no apparent reason. Maybe you limp around for a day, and then it disappears just as suddenly. It’s fine if you’re an average Joe or Jane, but it’s not fine if you’re an NBA big man.

I would not be surprised if Horford takes another game off next week. The Celts host Atlanta (currently not a playoff team, nor likely to be one) on Friday, then visit Detroit on Saturday. Al could sit vs. the Hawks, like he did against the Cadavers …uh, Cavaliers … last week, then come back against Detroit. After that, the Cs will go more than three weeks without facing another back-to-back situation.

And, finally… ‘Bangers’ is banged up

Baynes sprained his ankle against the New York Knicks in the first half on Thursday. After coming up lame on a roll to the rim, Baynes hit the ground hard and immediately scooted off the court. He got up after a minute and hobbled off the floor, directly into the locker room.

The Celtics have a net rating of 8.3 when Baynes is on the floor. His “doubtful” status is more encouraging than if he was simply “out,” but ankle injuries can take some time to heal, and the Celtics will want to ensure he is back to full health before allowing him back onto the floor, especially given the depth at the center position.

The man known to his fellow Aussies as Bangers probably won’t play tonight. The Celtics usually err on the side of caution when an injured player is iffy. And although Baynes usually doesn’t miss games (he played all except one last season), this would be his second time inactive this season (he sat out of three games with a strained hamstring in October).

We’ll hope for Baynes to get back to action ASAP – they’ll need him Monday against Anthony Davis – but there actually is a benefit if he sits. Minor sporadic injuries such as Baynes’ sprain and Jaylen Brown’s recent sore tailbone relieve the minutes crunch somewhat for the deep, talented roster.

At least that sounds good as long as the Celtics continue winning.

Globe: Numbers illustrate a notable uptick in Celtics offense  |  It took a while, but Celtics have hit on a winning formula