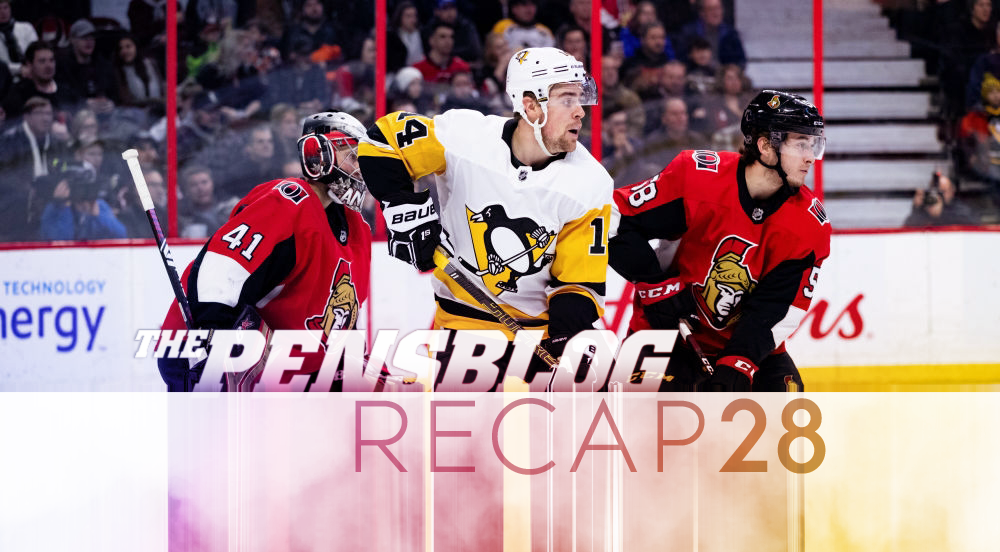 To quote the great Lou Brown “We won a game on Tuesday. We won a game on Thursday, that was two in a row. And if we win one tonight, that’s called a ‘winning streak.’ It has happened before.”

After hanging six on the Avs and Islanders, it was time to head back to the capital of America’s hat, a place called “Canada” to take on the Ottawa Oovoo Javers.

Duchene and Ryan were out for Ottawa, Hornqvist for the Guins.

JS Dea on the fourth line, Sheahan to the second.

The Penguins came out with their asses on fire. The first line of Guentzel-Crosby-Kessel spent nearly a minute in the Ottawa zone just under four minutes in. A promising start, but if you thought they would build on that, then you thought like an idiot.

The next shift, a rocket from Thomas Chabot beat DeSmith from the point.

Early on, Crosby was doing what Crosby does and putting more pressure on the Sens than a coal lobbyist. An unreal backhand, no-look pass right after the Ottawa goal to….Jack Johnson. $3.25 million well spent.

Despite a power play that saw the Pens pretty much hold the zone for a near full two minutes, Anderson would shut the door.

It was then you knew what was coming from the National Hockey League’s preeminent Bond villain Guy Boucher: a 1-3-1 and an absolute slog.

The Penguins sent 16 shots to the Sens seven in the first, but it was all Craig Anderson. Penguins with a staggering 5 high-danger chances to the Sens one…their goal was not one of them.

Yeah, so, keep the process and the goals will come.

It took just eleven (11!!!) seconds for the Pens deficit to mount to two. Casey DeSmith did his best Marc-Andre Fleury impression as Zack Smith would put a rebound past a sprawling (for god knows what reason) The Smith.

Sully would challenge for offsides and Bob Errey had more analysis on this one than the Zapruder Film during the deliberation. HCMS’s gamble paid off. The play was offside and we were stuck at one.

Then, just a few minutes later, The New Bryan Rust, JS Dea would tie this bad boy at one.

Great play by Dea to keep an arm on the defenseman, change his shooting angle and beat Anderson.

Dea’s goal would lead to the Pens taking the game back, or momentum if that’s your thing, and owning possession. A peek at Natural Stat Trick during the first media timeout saw the Pens sitting at a +30 CF%.

With 10:19 remaining, the Best Damn Third Line Center and good boy Brassard would get rung up for tripping. Ottawa was disjointed the first 1:15 of their power play, but then the final 45 seconds was the Casey DeSmith Redemption Tour. The Sens had unlimited chances, but The Smith was The Wall.

The whistles went away for the period as Sid caught an elbow to the face, Bryan Rust slew-footed a Senator, but a seemingly mild check in the offensive zone by Sheahan with under a minute to go was deemed boarding.

Sid would catch another elbow to the chops from Zack Smith and they went to work. Much like the rest of the game, the Pens owned the puck, but no goals.

Again, it was back to the PK. Letang was called for….slashing? I think? It was a stick check, but nevertheless. The Pengs came out unscatched.

With 5:30 to go, Kris Letang flipped Keith Tkachuk’s embarrassing offspring, which led to Tkachuk filling his diaper over it. Both went off for roughing and we played some 4-on-4.

The Penguins would, as they had the entire game, own the puck, but no goals.

Jack Johnson and his $3.25M contract would miss a wide open net even Bryan Rust would’ve hit. Only four years to go!

It was time for some 3-on-3. The Pens got a point. Eighth OT game of the season.

The OT began with DeSmith stopping White on a breakaway and then Geno jumped the boards when Guentzel changed. Can’t fault Malkin, Guentzel needs to get off the ice there.

Off to the island on Monday.