Your Morning Dump... Where the Boston Celtics scoring has exploded 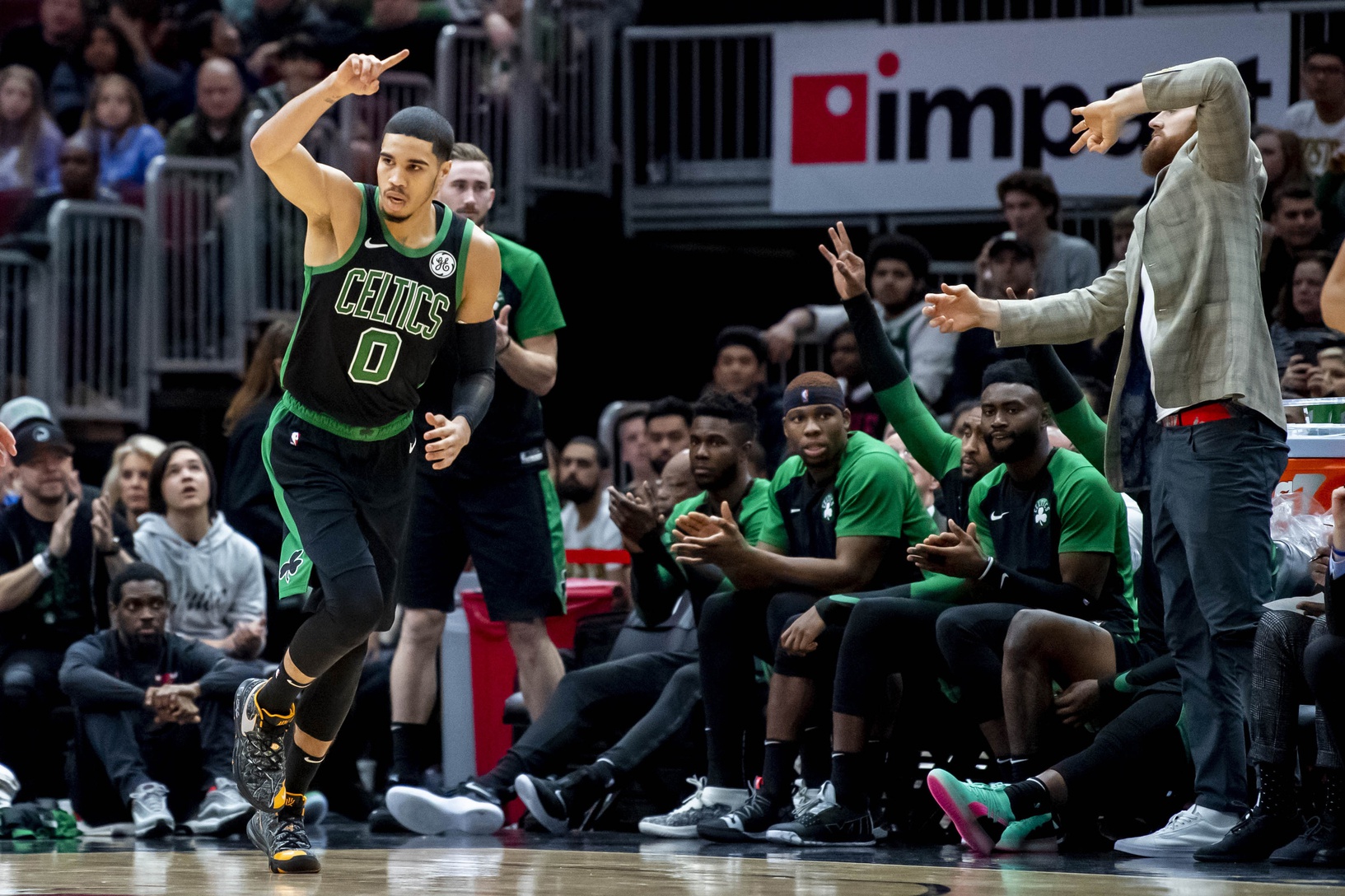 Your Morning Dump... Where the Boston Celtics scoring has exploded

The Celtics remain one of the league’s finest defensive units with the NBA’s second highest (102.1) defensive rating. But this latest surge has pushed their offensive numbers up the list. In the wake of their 133-point performance in Chicago, they are now 11th in offensive rating (109.1), sixth in assist percentage (62.4), and, in perhaps the truest measure of their rise, third in net rating (7.0) behind only Milwaukee and Toronto – two teams that have been scoring at a steady clip since the start of the season. Golden State, the gold standard in all these categories, has also just started to produce representative numbers, and is now fifth in net rating.

Herald: Celtics shoot up among the NBA’s scoring elite

Has the competition been strong? No. The Celtics have ripped through some generous defenses. But every indicator has trended in the right direction, leaving Boston with the balance that Stevens has craved. The Celtics have seven players averaging in double figures during the streak, plus Daniel Theis at 9.8 points per game. Brown has only played in two of the games, skewing the numbers a bit, but that’s still a sign the depth that Boston intended to lean on at the beginning of the season is rising up. Several players who struggled early, including Rozier, have fattened up on buckets lately.

The Athletic: King’s takeaways: Celtics finally starting to join in on all the scoring fun

I want to address the level of competition thing first. Yes, it’s true, Boston has beaten up on some bad teams, but this recent stretch has only brought them even with the competition in games against below .500 teams.

Saturday’s game against Chicago was their 11th game against a below .500 team. Toronto and Philly have played 12. Indiana has played 16. Detroit has played 13. Only Milwaukee, with seven, can complain about the strength of their schedule (and they’re beating those teams right now so there’s not much to complain about).

So while the Celtics have gotten fat off the worst of the league’s offerings, other teams have already had their seat at the table. Now things are evening out. Remember at the beginning of the season when everyone was scoring 130 points a game and the Celtics were stuck scoring 90?

Welcome to water finding its level.

There is nuance with every stat in sports, that’s why we always warn about small sample sizes. This recent explosion is a small sample but so were the early struggles, which is why this recent stretch has such a dramatic effect on the overall numbers. As the season presses along, a 130 point performance won’t pull the Celtics offensive rating up three spots. Eventually, they’ll land right where they’re supposed to and be the top 10 offense we expected.

The Celtics are thriving on that balance that has become the new C’s buzzword. With Hayward and Brown coming off the bench, Boston has a constant wave of talent on the floor. As I’ve said a few times lately, the biggest difference I see is Boston’s ability to counter-punch when other teams make runs.

Take the Bulls game, for instance. It’s hard to remember after a 56 point blowout, but the Bulls did make a little run to cut it to 13 in the second quarter. The Celtics of early November probably would have let that get to single-digits and messed around with a game closer than any of us liked. This Celtics team hit back with an 8-0 run that basically ended the game.

They’ve done that in all of the games during this streak. They countered every Pelicans run two weeks ago to start this whole run. It’s that ability to counter every run that’s leading to these blowouts because they’ve stormed out big leads, taken hits, and then hit back with runs of their own to build on leads. Each counter is another swing at the tree until the whole thing comes down in the fourth quarter.

My final note here is for the people who were panicking after 15 games and asking me on Twitter when it was time to hit the panic button. I always replied that Christmas is when the season really starts, and by the Christmas day games we’ll start to understand who teams really are.

Boston has found their groove with seven games left before Philly comes to town for Christmas. There are a lot of potential wins on the schedule before then, and even more games for Boston to level out their league-wide ratings. The Celtics are 4.5 games behind Toronto (three in the loss column) and the Raptors have lost three of four games.

Things are leveling out, which is proof once again that patience is necessary in long seasons.

Jay King and I discussed this scoring resurgence in our latest Locked On Celtics podcast. We were also joined by Trevor Booker, formerly of the Wizards and Jazz, who is now serving as the Locked On NBA analyst while he rehabs a foot injury. He gave us an inside look at how locker rooms function during struggles as well as some insight on his former teammate Gordon Hayward.

Related links: Globe: The Celtics’ recent surge is what we expected all along

Page 2: The Celtics damn near broke the Bulls

Saturday night’s 133-77 loss to the Celtics was followed with another set of pointed postgame comments by Boylen and the promise of another grueling practice session Sunday — this one after back-to-back games. Those events led to a tipping point that could either lead to positive results down the road or a complete mess of a season.

That grueling practice never took place Sunday because the Bulls players discussed a boycott of practice, multiple sources told The Athletic. Veteran players spent Saturday night trying to talk Boylen out of a Sunday session, sources said, and when their pleas were rejected, they began bouncing around other ideas in a team-wide group text.

The texts started Saturday night and carried into Sunday morning. One idea that had significant support, according to sources, was the players simply not showing up to the Advocate Center on Sunday. A preliminary plan was to gather at one player’s house and wait for the phones to begin buzzing. That plan fizzled because Lauri Markkanen and Robin Lopez spoke up, voicing their concerns about the unprofessionalism of that potential act of rebellion, as well as the impact such a stance could have on the roster’s younger, less established players, sources said.

The Athletic: How the Bulls narrowly avoided a full-blown mutiny in Jim Boylen’s first week as head coach

Jay and I also discussed this in the podcast… this one is a doozy.

Teams never practice after back-to-backs in the NBA, but I’m pretty sure getting waxed by 56 eliminates any team’s leverage for mutiny. Maybe instead of being pissed off at the coach, you NOT LOSE BY 56?? Who the hell is Ryan Arcidiacono to be participating in a coup? And Zach LaVine…

“It sucks to know you can help,” LaVine said after the game, lamenting how he and the other starters were forced into “sitting there watching the score go up and up.”

You were a -13 in 19 minutes, Zach. You weren’t helping anything. You should be thankful you spent all that time on the bench or else you would have been closer to Shaquille Harrison’s -43.

The Bulls have become the most embarrassing team in the league (don’t worry, Wizards, we still see you), and it starts at the top. Gar Foreman’s employment is a mystery at this point. He’s the architect of this disjointed team that, among its many weaknesses, also completely lacks any self-awareness.

I see people thinking Chicago needs to make the playoffs next season. The only way that happens if they send this roster to the G-League and Windy City makes a run.

The Celtics have run a cool alley oop play the past couple of games. Here’s a breakdown so you can watch for it again.

NBCS Boston: Will Anthony Davis suit up for Celtics Game?  |  What can the Celtics take away from blowing out the Bulls?

Boston Sports Journal: The case for more Daniel Theis for the Celtics