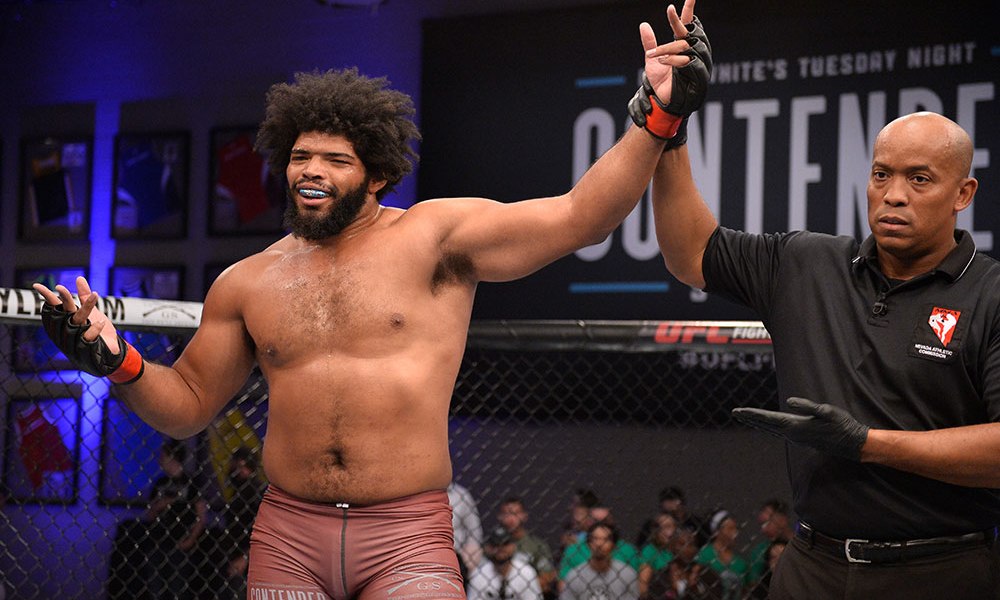 It’s getting to the point where we should probably rename this segment, Prelim Contender Series Star. The Contender Series keeps being a hit for incoming prospects and we have another that we love on this card.

Remember when we all got behind the hyper-athletic heavyweights that had to cut down to 265? Everybody thought it was the way of the future. Frank Mir bought into it so much that he began bulking up, figuring it was the only way to compete. Then we saw younger, faster, and lighter fighters take over. Stipe never hit the limit, nor did Cormier.

Not only does Adams cut to make the 265 lb limit, he walks around close to 300 lbs. In addition, it doesn’t affect his speed at all. He’s both physically imposing and dangerously fast, which makes for a tough combo to beat at heavyweight.

With only four fights in his pro career, his sample size is not quite as big as he is. However, each of his last three opponents had at least seven pro fights before throwing down with him and boasted an overall record of 17-11. So, his record already shows the ability to beat veterans even if he isn’t considered one himself.

Chris de la Rocha has, in a way, already fought a smaller version of Adams. In his second UFC bout he fought Adam Milstead, who was fast, athletic and strong. That speed, when combined with the strength to stop the takedown, proved to be too much for de la Rocha, who isn’t quite the physical specimen Milstead or Adams is. Now in this fight, de la Rocha will have to deal with all of those same gifts, but also much more size. Milstead has since dropped to 205 lbs and Adams would likely need to lose a limb to do that. Using that fight as an analog, it’s pretty unlikely that de la Rocha makes it even out of the first round.