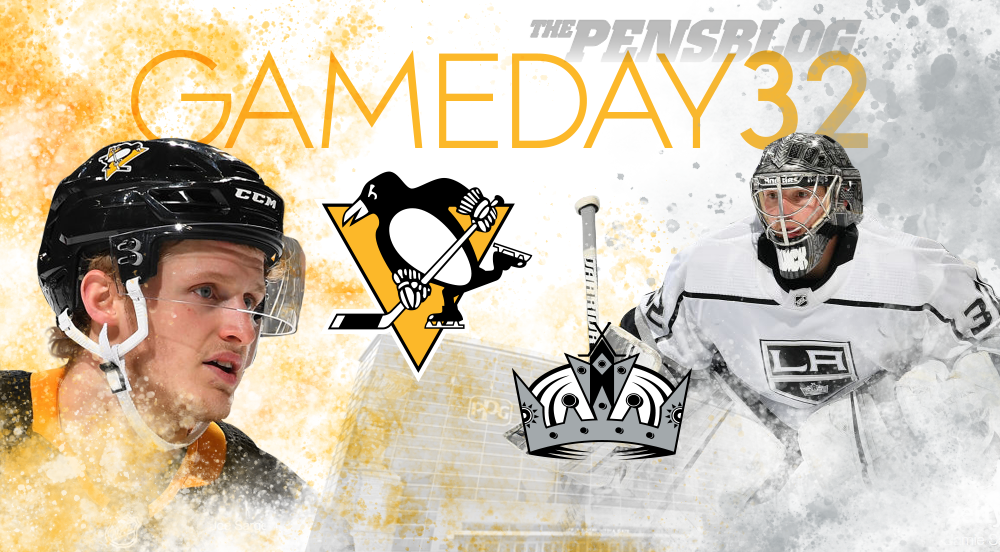 Tonight, in the 2nd of 3 games in this mini-homestand, the Penguins take on the 31st ranked team for the second time this week as the LA Kings come to town for the Pens’ first of 6 matchups against the California teams.

The Penguins will be coming into this second of a back-to-back looking to build off the 5-3 win against Boston last night, a victory that put them two points clear of the Islanders, who have a game in hand, for 3rd place in the Metro and just 2 points back of the 2nd place Blue Jackets.  Much like the Penguins, both teams in their immediate vicinity have trap games tonight to keep an eye on as the Isles welcome the Wings and the Jackets play host to the Ducks, who will be in Pittsburgh on Monday night.

What’s more, while the Penguins haven’t played particularly well 40% of the way through the season, they’ve been finding ways to get results lately, going 6-3-1 in their last 10.  We can’t say the same thing about LA, who are a lowly 3-6-1 in their last 10, having won just 4 games on the road all season long.

They should be there for the taking.

Impossible to know what’s going on with Kris Letang, who left last night’s game with an apparent knee injury.

The Penguins cancel Saturday's morning skate. Presumably, there won't be an update on Kris Letang's status until Mike Sullivan speaks with media at 5 p.m.

If he can’t go, you’d expect Juuso Riikola to find his way back into the lineup, a player that was particularly good before Marcus Pettersson arrived.

Meanwhile, Matt Murray looks set to get the start tonight in his first bit of game action since November 17th.  The second of a back-to-back isn’t the best situation for him to be coming back into after not playing for a month, but if the Penguins can insulate him as they have with DeSmith, it’ll make his life just a bit easier.

On the other side of the ice, a bad and fragile LA Kings team will be looking to climb out of the league’s basement in hope of doing….something this season.  Their growing list of injuries won’t help as they’ll be without the services of Ilya Kovalchuk, Carl Hagelin (RIP), Trevor Lewis, Kyle Clifford, Dion Phaneuf, Alec Martinez, and Jack Campbell.  They also come into this having scored the fewest number of goals in the league (71) and 3rd fewest at 5v5 (49).  A perennial powerhouse is anything but this season.  Oh, how the mighty have fallen.

What to watch for