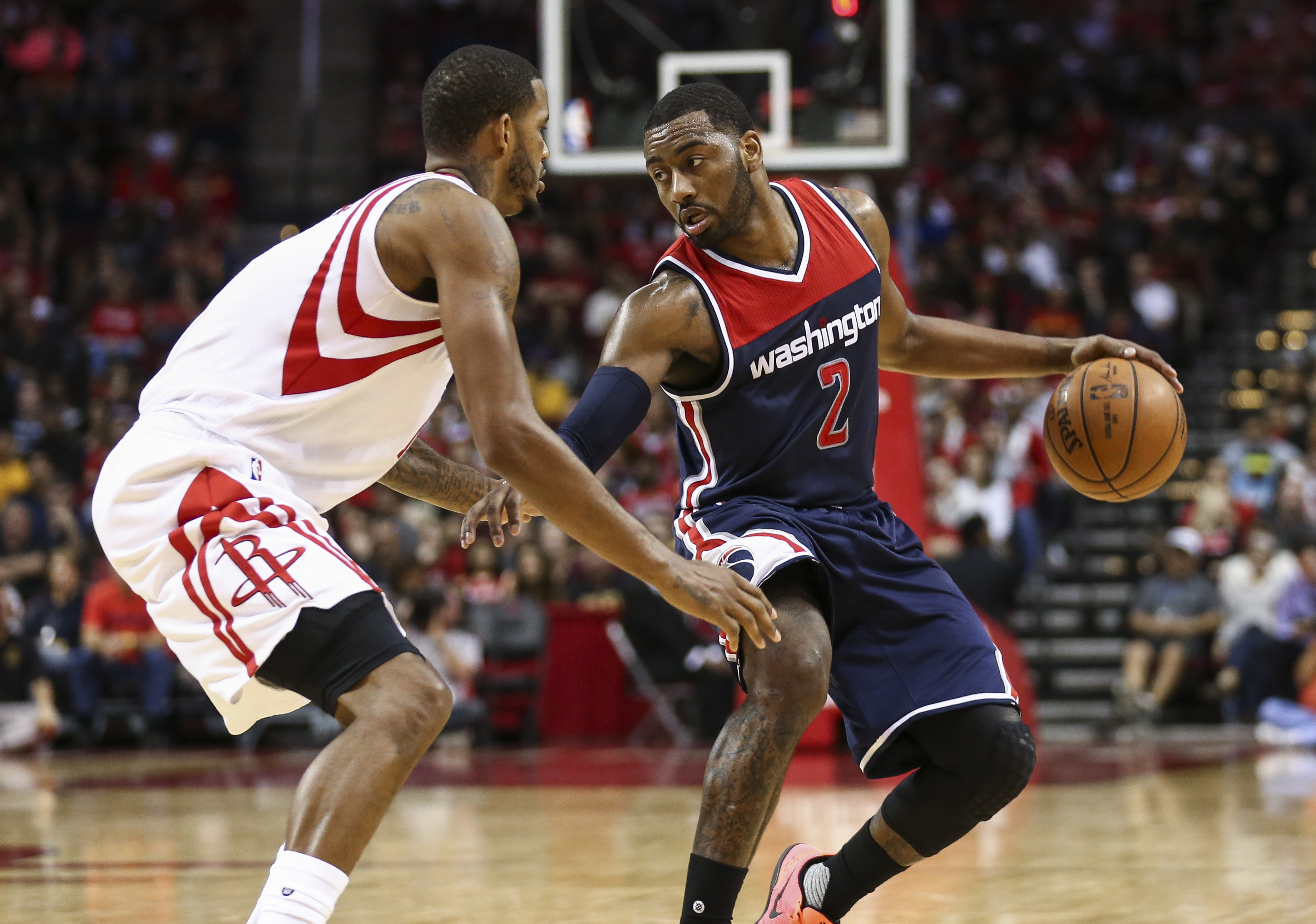 The Washington Wizards will be acquiring forward Trevor Ariza from the Phoenix Suns in exchange for Kelly Oubre and Austin Rivers. The trade is likely to become official on Monday. This all comes after a soap opera like three-team trade crumbled when it was unclear whether the Memphis Grizzlies were parting with MarShon or Dillon Brooks. The Grizzlies backed out of the three-team deal (that would have netted Washington two second-round picks – one conditional) and is adamant that they are not to blame for the miscommunication. After Saturday’s shootaround-like practice, the Wizards two best players, John Wall and Bradley Beal, discussed the aspects of the trade and how it played out. Head coach Scott Brooks declined to comment on the trade because it is not official yet.

On his reaction to the trade:

“Pretty interesting. We all understand it’s a business. You never know what’s going to happen when. First time I’ve ever seen a trade go dead, guys on the bus and talking about it. (This coming from a guy who saw Kirk Hinrich get traded at halftime.) Kind of devastating for those guys, they came in [and] tried to give everything they had. Especially K.O., being here for four years. Watch him develop from his rookie year, not getting any minutes to coming into his own and being the X-factor for our team the last couple years like I’ve always said. I was sad to see him go. Austin, building a bond with him throughout this summer, working out at PVC [in Miami]. Him coming to the team after we were working out. It’s always sad to lose teammates. Wish those guys the best in their next situation. It’s always great to add a player like Trevor back. One of the best veterans and teammates I’ve ever had in the past and we know what he brings to the table and it seems like he’s excited to be here.”

John Wall said the trade was "pretty interesting." Says it is tough to see teammates go especially Kelly Oubre who he has always said is the team's "X-Factor".

He said Trevor Ariza, one of his best veterans and teammates, is excited to be back in D.C. pic.twitter.com/wwu0s0zEDt

On the team atmosphere when the trade went from happening to not:

“It was kind of weird, kind of difficult. Finishing the game, lost, feel like we should have won. Lost the game, they [Nets] played better than us. To go into the locker room and about to shower and stuff then ‘who’s been traded, who’s been traded?’ Tough situation. I give those guys credit they handled it like professionals. A lot of guys could have reacted in different ways, which I’ve seen in the past. On the bus, they were just calm, conversating. And then when it went dead, we were like, ‘what in the world, we’ve never seen this happened before.’ How you misplace not knowing a team has two Brooks? Kind of funny. Just went back to having regular conversations.”

John Wall: "How you misplace not knowing a team has two Brooks?"

Wall credits Kelly Oubre and Austin Rivers for being professional during the entire ordeal.

On if 11-18 record dictated Wizards needing to make a move:

“We’re not playing nowhere near what we’re capable of. Maybe that’s the move we should have made. I don’t know until we go out there. Before the season started, we looked good on paper. Had Dwight and then he’s not been here, played a few games. Having Austin come in dealing with a couple problems. Otto dealing with injuries. Me. Different things that happen. We have to be fully healthy and have all those chemistry aspects add up and it hasn’t added up for us this year so far.”

On Austin Rivers never quite figuring things out:

“I think he tried to figure it out. It’s always tough coming from a situation where he had his best career [year] last year. He started for them and had the ball in his hands a lot. Coming here, playing with Kelly and those guys, Tomas. Kind of figure out when he can get his shots and when can he be aggressive. Kind of was a tough situation for him. We thought he was going to have a lot of minutes playing with me and Brad. I think those were probably his best games when he finished the game with me, Brad, and him as the three-guard lineup. A lot of times, we didn’t get to that situation.”

On why he thinks Kelly Oubre was traded:

“Only thing I really can think of from my standpoint is Trevor made 15 [million], Austin made 12, Kelly makes 3 this year. Kind of in a situation where we are in a tough bind. We have three guys that are kind of paid pretty high and understand what Kelly’s probably going to get or receive or ask for this summer, I don’t think we have the money to match it. I think that’s the reason why we made that trade.”

John Wall knows it all comes down to the 💰: "We in a tough bind. We have three guys that are kind of paid pretty high and understand what Kelly's probably going to get or receive or ask for this summer, I don't think we have the money to match it." pic.twitter.com/zoAJvjfxep

On having another voice in the locker room:

“I think it’s just great. Especially a guy that won a championship. You get more from what he understands and what it takes. Also learn from Jeff [Green]. He didn’t win it, but he was in the Finals and understands what it takes to get there.”

On how Ariza can fit into the chemistry:

“With Trevor, he’s a guy that he understands his role. Come in as the glue guy. That’s kind of what you need with these certain teams. You know who your guys are that are going to be the scorers, distributors getting everybody the ball, but you look at guy like Toronto. They got a lot of glue guys: Siakam, Anunoby, those guys just come in and play their role and know what they’re supposed to do. That’s what you try to find on those certain teams when you are trying to make a push, make a run. That’s what we’ve been dealing with the last couple years. Hopefully we add a piece like Trevor who knows that, understands that, try to help out as much as possible.”

John Wall has talked before about some players not knowing their role. He is confident that will not be an issue with "glue guy" Trevor Ariza. pic.twitter.com/5rhqwCXi9v

On Ariza leaving in free agency in 2014:

“He was gonna come back. It was a decision between front office and him about money standpoint. What he wanted and what he was trying to get. Other than that, he was coming back here and you seen what he added to Houston when he went there and how he helped those guys out. He’s a big key and a factor to a lot of teams and he’s just a great vet.”

John Wall on Trevor Ariza leaving in free agency in 2014: "He was gonna come back."

Then the #Wizards front office was not willing to pay up. Looking back, 4-years, $32 million was a bargain. pic.twitter.com/hbPSkuEIit

On his reaction to the trade:

“It’s kind of a two-way feeling. You never want to see guys who you develop relationships with to go. We’re getting Trev back. Trev is like my vet. From that aspect, I’m happy about that. Especially Kelly, Austin too, it’s definitely tough but, it’s a business at the end of the day. That’s what they feel like we needed to do. All we can do is live with it.”

Bradley Beal says the "crazy" and "unreal" trade is a "two-way feeling."

Trevor Ariza was his vet when he was in D.C. and they talked after the trade.

On the timing of the trade and how things went down:

“It’s crazy. Unreal, it’s kind of unreal. You don’t see that a lot. Kind of feel for Kelly and Austin to be kind of put in that trick bag in a way of not knowing what the hell is going on. Not knowing what’s really going on, today you end up being gone. I think they handled it well, they handled it like professionals because I think anyone else would have been a little more frustrated, probably shown it a lot more than they did.”

On if Washington simply needed a change:

“The team, I guess, we felt like we needed a change. Hopefully it’s a change just to spark energy out of us, just a little life out of us. Get us playing the way we know we’re capable of playing. … I’m always going to rock with whoever’s in the gym. Guys want to hoop and guys want to play and win games, I’m always here with you. I’m always going to come out and compete every night. I’m not to say who the change is if we do need one. That’s not my job. My job is to come in here, move the scoreboard and help my team win games. That’s what I’ll always try to do.”

Bradley Beal doesn't comment on whether the #Wizards needed a change: "That's not my job. My job is to come in here, move the scoreboard and help my team win games." pic.twitter.com/D00stgNT2H

“We was a great team. A really, really grimy team. Our mindset was defense. We wanted to defend, keep you under 100. Kill you on the offensive end, inside-out. He was one of our, he was the best defender on our team for two years. It was unfortunate we couldn’t keep him.”

On Ariza’s locker room presence and if Wizards need that:

“He’s vocal. He’s not afraid to voice his opinion and call guys out. Hold them accountable. I think he’s a presence we needed. A challenge we need as well. … Everybody has to be held accountable. No matter if it’s me, John, all the way down the line. We all have to be held accountable. No man is better than the next man. Everybody has to hold their own, everybody has to do what the team needs to do in order to win. If you’re not doing it, you have to be called out on it. I don’t think it’s a matter of necessarily bringing Trev in to say that’s what we need, but it helps.”

Bradley Beal says Trevor Ariza will help hold everyone on the #Wizards accountable: "Everybody has to be held accountable. No matter if it's me, John, all the way down the line. No man is better than the next man." pic.twitter.com/pG2Ql3eZJu