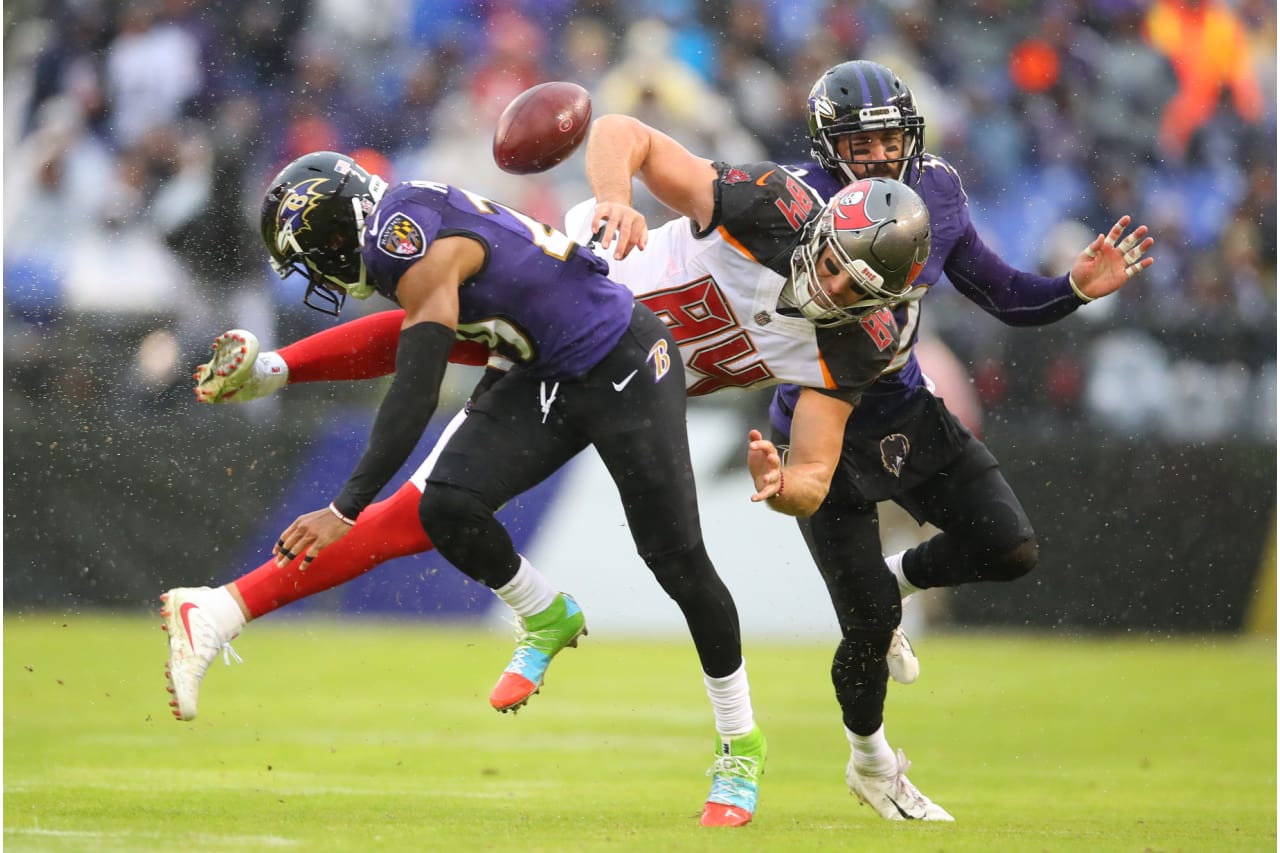 We give the Tampa Bay Bucs credit—on a chilly rainy day in Baltimore, they flipped the script on the Ravens. They went to the ground game emphasis on offense. It briefly threw the Ravens for a loop. That’s because Tampa Bay was the leading passing team in the NFL in terms of overall yardage entering the game.

But the Ravens adjusted on defense, Marlon Humphrey came up huge on his coverage game from his corner position, and the Ravens offense did just enough to pound the Bucs into a state of surrender with four minutes to go.

Nothing pretty about the Ravens on offense—it was in fact ugly at times. Cyrus Jones also pulled a boner on an errant touch of a bouncing punt which could have cost the Ravens the game. But Tampa Bay was out of sync and really couldn’t cash in when they had to.

For now the old school wish-bone formula still works for the Ravens—-for the most part.

Rookie quarterback Lamar Jackson “sort of” picked apart the Tampa Bay defense on a soggy field, running for 95 yards and throwing for 131 to carry the Baltimore Ravens to a 20-12 victory Sunday.

Anointed the starter over veteran Joe Flacco earlier in the week, Jackson justified the decision with a sometimes riveting performance. Slipping between and sliding around potential tacklers, the 2016 Heisman Trophy winner operated the run-pass option in much the same fashion as during his glory days at Louisville.

On some busted plays, however, Lamar looked goofy. Fortunately for the Ravens none of those goofball plays came back to haunt them.

Jackson directed two drives that lasted more than seven minutes, carried 18 times and completed 14 of 23 passes, one of them for a touchdown.

Baltimore (8-6) is 4-1 since Jackson took over for the injured Flacco, the only loss in overtime at Kansas City. Jackson has rushed for 427 yards in those five games.

Tampa Bay (5-9) simply couldn’t find a way to stop Jackson and the running game, which amassed 242 yards on 49 attempts. Baltimore is the first team since the 1976 Steelers to rush for at least 190 yards in five straight games, according to the Ravens.

Baltimore’s second-ranked defense did its part, holding the Buccaneers to one touchdown and 241 yards. In the fourth quarter, the Ravens picked off Jameis Winston‘s pass and forced an incompletion on fourth down from the Baltimore 33 with 7 minutes left.

The Ravens went up 17-9 by opening the second half with a 78-yard drive that lasted nearly five minutes. Jackson extended the march with a 17-yard completion to Mark Andrews and peeled off a 22-yard run before Gus Edwards scored on a 10-yard burst up the middle.

Baltimore then forced a punt, but return man Cyrus Jones inexplicably touched the bouncing ball. Tampa Bay recovered and turned the miscue into a field goal.

Jackson answered with a 15-play drive that covered 38 yards and produced a field goal for a 20-12 lead. The game ended with Jackson taking a knee three times in succession inside the Tampa Bay 10.

Baltimore squandered its first promising drive late in the first quarter when Jackson botched a handoff and the Bucs recovered the loose ball at their 49. A 23-yard pass to Mike Evans set up a 3-yard touchdown run by Peyton Barber.

On the conversion, the wet football slithered through the hands of holder Bryan Anger.

The Ravens responded with the kind of drive that showed why Harbaugh picked Jackson over Flacco, who’s now healthy following a right hip injury. Jackson contributed 19 yards rushing to a 73-yard march that used 16 plays, lasted more than eight minutes and ended with a shovel pass from Jackson to Chris Moore, who scooted around right end for a 5-yard TD.

Bucs: TE Alan Cross left with a shoulder injury in the second quarter and did not return.

The Ravens gladly take the W to go to 8-6, then watch the scoreboard as the late afternoon result of the Steelers-Patriots game determines whether the Ravens or Steelers occupy first place in the AFC North.