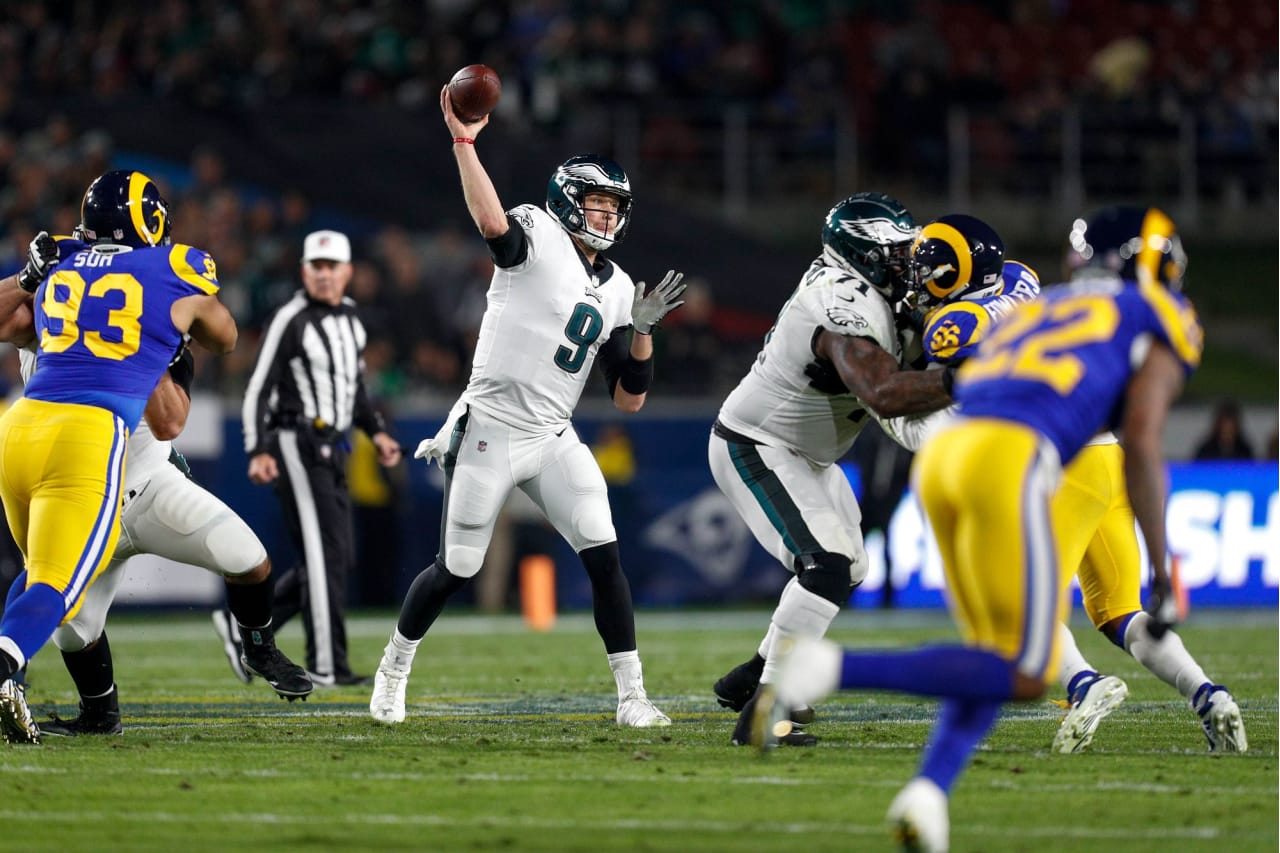 They started to unravel after building a 30-13 lead, but somehow the Eagles held it together and endured a last-minute siege.

Nick Foles took over at QB and passed for 270 yards, and Wendell Smallwood rushed for two touchdowns in the Eagles’ 30-23 victory over Los Angeles on Sunday night. Rookie Josh Adams also rushed for a score as the Eagles (7-7) kept their playoff picture alive with a gritty victory over the Rams (11-3), who lost consecutive regular-season games for the first time in coach Sean McVay’s tenure.

The Eagles scored 17 consecutive points in the third quarter and then survived the Rams’ late rally. They got help from Los Angeles returner JoJo Natson, who fumbled a punt return that D.J. Alexander recovered with 2:51 to play.

After Philadelphia’s Jake Elliott missed a field goal with 1:08 left, Jared Goff got the Rams to the Philadelphia 18 with 4 seconds to play — but he couldn’t connect with Josh Reynolds on a pass to the goal line as time expired.

Foles went 24 of 31 in his first game action since Week 2 in place of Wentz, who sat out with a back injury that could sideline him for the rest of the season.

The Rams’ Todd Gurley rushed for two touchdowns — giving him an NFL-best 21 TDs this season — while catching 10 passes for 76 yards. Goff passed for 339 yards with two interceptions in the Rams’ first loss at the Coliseum this season.

Although the Rams made a 13-play scoring drive that consumed nearly half of the first quarter, Foles and the Philadelphia offense had three scoring drives in the first half, including a 75-yard march culminating in Adams’ TD run shortly before halftime.

The Eagles took a 20-13 lead shortly after halftime with a two-play, 59-yard drive ending in Smallwood’s first TD run since Week 3. After a Philadelphia field goal, Goff stumbled with a snap and under pressure flipped an ill-advised pass into the lap of a blitzing Corey Graham, who returned the interception to set up a drive ending in another TD run by Smallwood late in the third quarter.

Los Angeles finally mounted an 84-yard drive capped by Gurley’s second TD run with 4:06 left, and the defense got a stop — but Natson simply lost control of the ball after catching the punt and making an initial juke.

Foles repeatedly connected with Alshon Jeffery, who had eight catches for 160 yards. Zach Ertz had three receptions to become the fourth tight end in NFL history with 100 catches in a season.

Eagles DC Jim Schwartz called a nice game by getting consistent pressure delivered on Goff which certainly helped the defensive backs in coverage. Eventually Goff and the Rams went up-tempo and fatigue became a factor for the Eagles defense, as simultaneously the well ran dry for Foles and his offense later in the game.

There we were in the dreaded “prevent” package with under a minute to go and the Rams driving for the tie—or, knowing how McVay thinks, the win as I would bet he would have gone for the 2-point conversion to steal the game.

But a couple of breaks went our way. The Rams were out of timeouts, and Todd Gurley couldn’t get out of bounds on a key completion as the clock ran down. Then Goff slightly overthrew his target in the end zone on the final play.

The Eagles still trail NFC East leader Dallas (8-6) and sit even with Washington (7-7), so they will need help to get back into the postseason. But it was gratifying to get a win in L.A. Hard work paid off, nice to see a “team win” like that against a very tough opponent on the road.

Eagles: DT Fletcher Cox went to the locker room on a cart during the first half with a hip injury, but returned to the field before halftime. Cornerback Cre’von LeBlanc was shaken up late in the second half.

Rams: Gurley missed several snaps in the second half with a knee injury, but returned.