The UFC closed a chapter in Milwaukee, Wisconsin Saturday night in their final UFC on Fox event before the move to ESPN next year. The main event featured potential 155 lbs. title challenger and fourth-ranked lightweight Kevin Lee attempting to avenge a loss against eighth-ranked Al Iaquinta.

The best-laid plans of mice and men often go awry, but Lee didn’t have a particularly good plan throughout the fight either. Iaquinta proved to be the more effective boxer early, snapping Lee with punches throughout the first 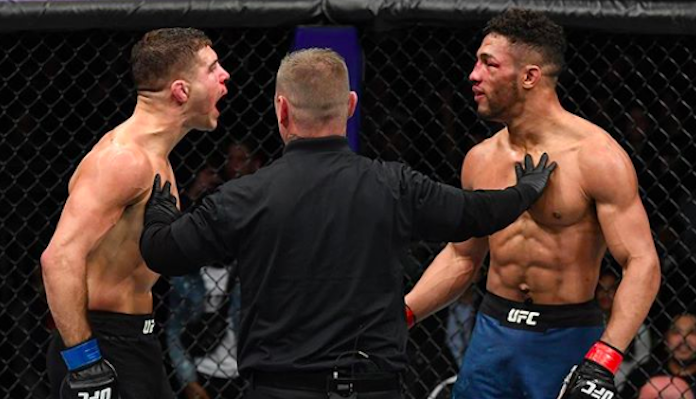 five minutes to give him the round. Lee found his bread-and-butter in the second round with a takedown and looked for a rear naked choke, but Iaquinta was able to escape and get back to striking the final minute or two despite losing the round. Lee found the same body triangle position in the third to end that round, but decided to strike with Iaquinta over the final two rounds and found himself rocked and on his bike throughout, costing him the decision on 48-47, 48-47, 49-46 scores for Iaquinta. Lee was surprisingly confused as to why he lost the fight after, but congratulated Iaquinta nonetheless.

Another lightweight contest turned into a beating as Edson Barboza took on Daniel Hooker. Barboza slowed the aggressive Australian’s pressure in the first round with leg kicks and counter punches as Hooker stepped in. Mustering only a takedown in the second, Hooker took a beating from

Barboza to the body that left him wanting to sit without a stool at the end of the second. Hooker came out for the third round, for better or worse, and was hit with a spinning back kick for his troubles. Barboza spammed body kicks with some punches and knees to the head mixed in to set up another spinning back kick. A left hook put Hooker down for the referee stoppage in the third round.

Elsewhere, Rob Font gave Sergio Pettis an unceremonious welcome back in the younger Pettis’s return to bantamweight by keeping him at the ends of his punches throughout and mixing in some vicious ground-and-pound to a 30-27 unanimous decision across the board.

In the opener, lightweight Charles Oliveira just needed a body lock takedown to take the back of Jim Miller for a rear naked choke in the first round. Oliveira avenged his first loss in the UFC with the win and set a Performance of the Night record in the process.

-Nolan can be reached at nth993@gmail.com