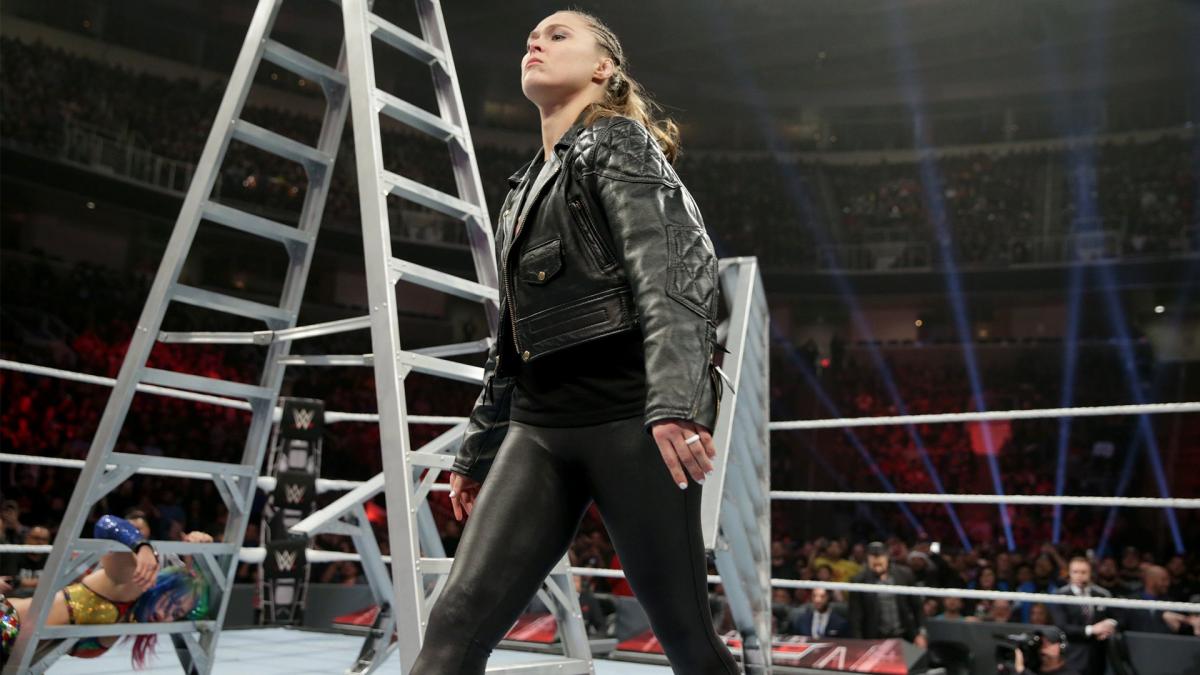 Ronda Rousey made her presence known during the SmackDown Women’s Championship mach at TLC. The bout featured the blue brand’s top three female Superstars batting for the title in a match that was an instant classic.

Asuka and Charlotte Flair both stepped up against champion Becky Lynch and the trio fought in the first-ever women’s TLC Match. This one delivered exactly what the fans expected and then some. But it was Rousey’s actions that have made the headlines as she has set the stage for WrestleMania 35.

This moment was a long time coming. Rousey and Lynch have been in a war of words on social media for months. The Baddest Woman on the Planet has taken the best that The Man has to offer and she kept coming back for more.

Lynch’s popularity is matched only by her impact online, as fans all over the world are razor focused on all of her social media. Those fans have seen Becky take one shot after another at Ronda and they’ve also seen the Raw Women’s champion fire back every time. The WWE faithful knew it was only a matter of time until things got out of control.

Some believe that Rousey turned heel at TLC. This may be a knee-jerk reaction however, as she has indeed been provoked. It was Lynch who attacked Rousey in the Raw locker room. Ronda has been on the defensive from the beginning She chose her moment to go on the offensive and contrary to popular belief, that does not make her a heel.

So Rousey made her point in a very big way and cost Becky the prize that she holds most dear. Lynch was red-hot before she became the champ but she went nuclear afterward and Ronda took that away from her. Asuka is the new champion and Lynch is surely left with revenge on her mind. But what happens next?

From the moment that rumors began circulating that Rousey was interested in WWE, fans began fantasy booking her career. Her dream opponent was Charlotte Flair and that is understandable. After all, Flair has been the face of women’s wrestling in WWE. Ronda Rousey is the face of women’s combat sports. Their meeting seemed inevitable.

The truth is, it still does. Charlotte’s career was destined to intersect with Rousey’s and when the two faced off at Survivor Series, fans got the dream match they wanted. It was everything that WWE promised and so much more. But it wasn’t WrestleMania.

That fact did not subtract from the moment of course. But Flair versus Rousey had such a “big fight” feel to it. Seeing it on any other stage besides Mania seemed like a waste. Of course circumstances dictated that the match happen at Survivor Series. Now circumstances dictate that Rousey should face someone else.

Becky Lynch is healthy. She’s never been more over than she is right now. Even without the title, she’s still the most popular star in WWE. How could the company even consider booking her against anyone else at WrestleMania other than The Baddest Woman on the Planet? But then there’s Nia Jax.

Jax is the X-Factor in this storyline. She is the one that throws everything into disarray. Had she never “broken” Becky’s face, she would likely not even be involved. However she is now a major component and she will surely be in the mix at WrestleMania 35. So what happens on The Grandest Stage of Them All?

Payback’s a bitch…. and I’m the baddest one on the planethttps://t.co/D9iBSReKQR pic.twitter.com/u30x7Uo6hZ

If Rousey and Flair face off one more time, then Lynch versus Jax is the next logical booking. Both matches are main event quality bouts and both would surely deliver on every level. WWE could pencil those matches in today and fans would certainly be happy at WrestleMania. But what about Asuka?

The newly crowned SmackDown Women’s champion is barely into her reign but fans have to wonder what the plan is for her heading into 2019. The Empress of Tomorrow needs a high profile match against a high profile opponent. WWE has three women with Rousey, Flair and Lynch, who currently fit that description.

In a perfect world, WWE would book a Fatal 5-Way at WrestleMania 35 and that match would tear the house down. But there’s something to be said of splitting these talents apart to make two phenomenal matches.

Rousey versus Flair. Lynch versus Jax. Or, Ronda versus Becky and Charlotte versus Asuka. A Triple Threat, a Fatal 4-Way. Any one of these matches are likely going to happen at WrestleMania 35 and it’s all because Ronda Rousey finally stepped up to prove she will not be intimidated. It was inevitable that Rousey would eventually reach her breaking point and that is exactly what happened at TLC. WWE has options with both champions and their challengers. The Road to WrestleMania should be one for the ages.