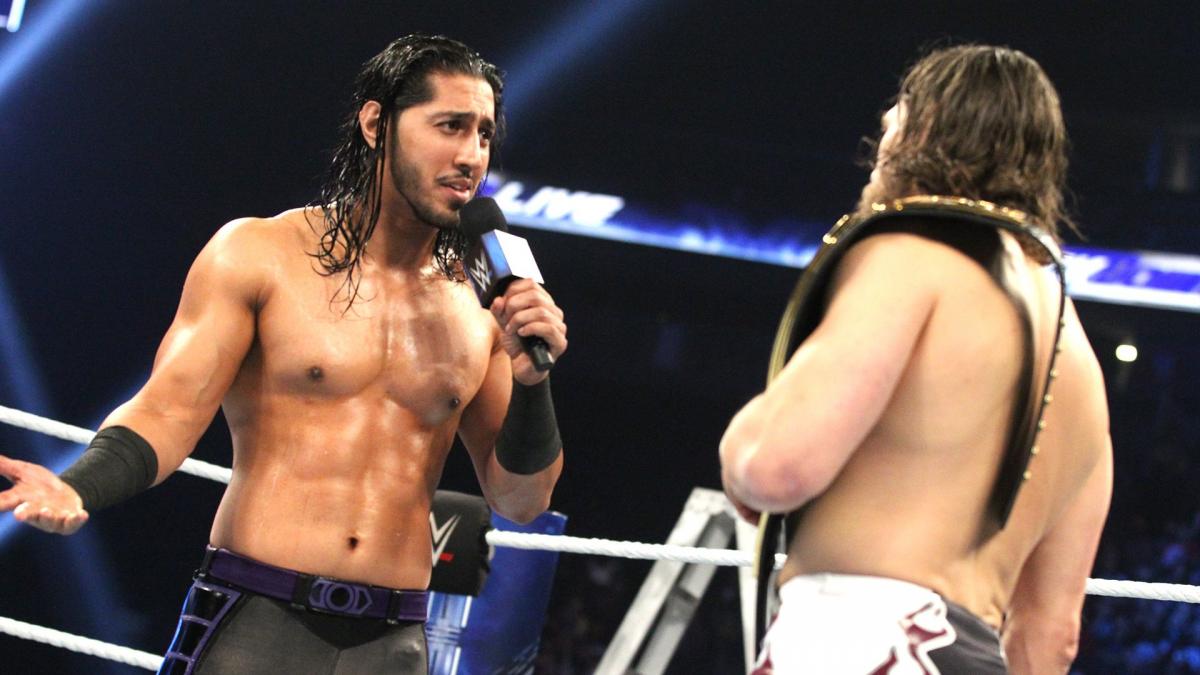 A much needed distraction from Monday Night Raw’s abysmal downfall comes from that of Mustafa Ali. The heart and soul of 205 Live was the topic of discussion this week after being announced to face Daniel Bryan in a singles match on last Tuesday night’s Smackdown Live.

As that heart and soul, Ali was not only a surprising choice, but a great one. While this opportunity to face Bryan could have went to anyone on the Smackdown roster, the risk taking of selecting a cruiserweight has certainly paid off.

Not to say that Ali had doubters, but if anyone knows his past work in the Cruiserweight division, there should have been no doubt at all. In fact, perhaps there was no better person in that position to face the WWE Champion.

Ali put on a great performance, going toe to toe with Bryan until the very end. The performance drew comparisons to that of a young John Cena versus Kurt Angle sixteen years ago in 2002. The buzz about that historic comparison led to comments from Angle.

Angle made a point that the match between Ali and Bryan was great storytelling. From the promo to the end of the match, the story gave fans an insight to the background of both men, who were well known in the independent circuit before their time in WWE.

It may have been a full circle moment, but either way, the match was something special. The reaction from talent backstage was overly positive.  Perhaps Ali’s performance will lead to more impromptu matches such as his on the main roster in the future. Matter of fact Ali has posed some dream matches courtesy of his Twitter after Tuesday.

One match Ali proposed – AJ Styles versus Cedric Alexander – is definitely a match to see in the future.

Ali’s showing on Smackdown is something that the company needed given the negative reactions to its “A” show, Raw. The decision was something out of the blue, but a nice surprise for the WWE Universe.

A photo can summarize a feeling so well sometimes. That was the feeling watching @mustafaaliwwe on Smackdown. I’m proud to be on the underdog show full of Superstars. All the guys have passion, heart, and especially talent. These guys impress every night even if the arena is still filling up. And people are still finding their seats. My suggestion come to the show early, find your seat, and be a part of a movement. Enjoy a show where you can have a real impact by clapping for a guy that you enjoy watching. Teach the people around you and watch your favorite rise to new heights as 205 Live gains even more popularity in 2019. A movement is coming. It started last night. Thank you to the entire roster for welcoming me in. And thank you for making me even more passionate about @wwe @therealmichaelbennett @cedricalexander1 @mrgentlemanjack @noamdar @wwe_murphy @tonynese @ariyadaivari #205live #205love #roadfamily #205life #cruiseintothemovement #wwe #TheFirstLady #TheCabinet

Maria Kanellis said on her Instagram that 205 Live is a movement, and perhaps she is right on the money. Smackdown was just the start.

Cheers to WWE for aiming to try something different that was greatly rewarding all around.