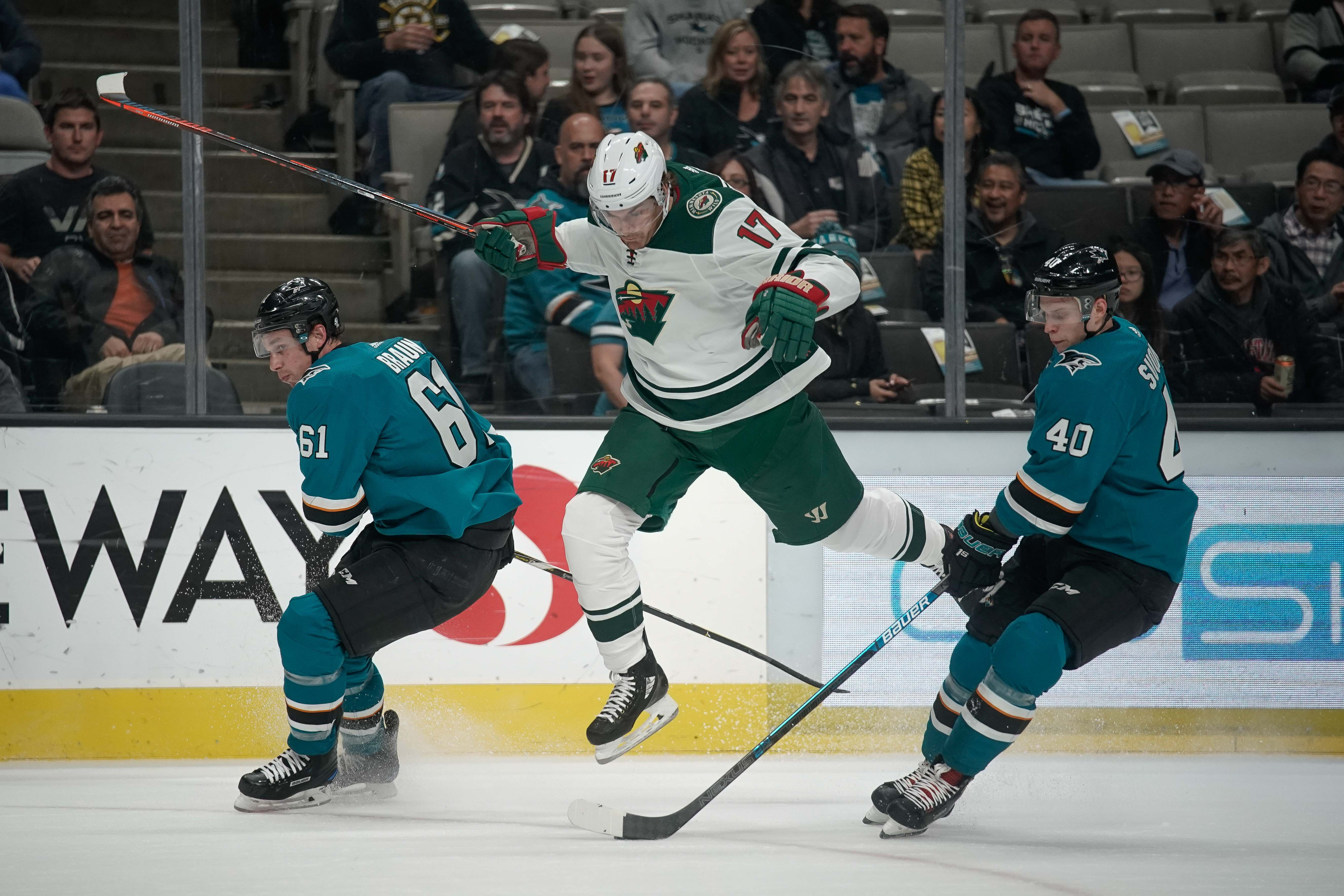 Listening to Sunday’s Sermon with KFAN‘s Dan Barriero who started his show by going off on the Flames’ players who went after Matthew Dumba multiple times over a clean hit he had delivered a week before.  In some ways its tough to argue his point about no amount of revenge is never enough so despite the fact Dumba obliged and dropped the gloves in the opening minute of the game it wasn’t enough.  It is clear ‘answering the bell’ wasn’t enough unless he was significantly injured in the process.  The fact Dumba is one of our best players and has a crucial role on the power play probably only seemed like a bonus if you could hobble him and by the end of the 1st period they got their wish.

Not much was said about the nature of the injury which seems pretty ominous.  The Sharks come to town and while it doesn’t seem likely to be the same boiling blood between the clubs as there was between the Wild and Flames it still has the potential to be a physically punishing game.  Will San Jose sense the team is vulnerable and try to ramp up the hits and scrums after the whistle?  Can the Wild shut down the Sharks tonight?

1st Period Thoughts:  The first half of the period was like watching a chess match as both teams were very diligent and calculated as they were wary of giving up a prime scoring chance.  Minnesota was especially diligent on the backcheck as forwards made sure they got sticks into passing lanes to deny the Sharks from funneling pucks on goal.  The top line of Zach Parise, Charlie Coyle and Nino Niederreiter were especially careful and did a great job of supporting their defense by quickly escorting pucks out of their zone before San Jose could generate much in the way of offensive pressure.  Minnnesota had the first quality scoring chance of the game as Eric Staal got a little time and space behind the Sharks’ defense and he wired a heavy snap shot that went underneath the arm of Martin Jones and off the left post and out.  The Wild were looking to catch the Sharks off guard with a quick counter attack, but the few times the Wild just couldn’t get the cross-ice pass to connect.  The Sharks were taking any chance to send shots on goal as Brent Burns and Erik Karlsson were especially active, just hoping for a lucky bounce.  Its not a terrible strategy as the Wild to block shots where they could while Devan Dubnyk tried his best to see over and around screening players.  The period was pretty snooze worthy, but with the Sharks lighting up their opponents so often on the scoreboard lately, Minnesota had to feel pretty good about their effort.

2nd Period Thoughts:  The Wild tried to get things going offensively early.  Their best early chance came from its 4th line as Nate Prosser sent a bank pass off the boards right to Joel Eriksson Ek who tried to fire a quick shot but Jones was able to come up with the stop.  While there was a little pushing and shoving after the whistle, a scrum finally boiled over into a fight as Greg Pateryn dropped the gloves with Timo Meier in a spirited scrap near the corner.  Pateryn seemed to get the worst of it as he had a nice cut on his forehand from what I think may have been Meier’s elbow pad as he was firing jabs at the Wild defenseman’s face.  I’d give the win to Meier.  Pateryn’s injury seemed to embolden the Sharks and Minnesota found itself spending more time in its own zone.  The Sharks continued with the simple strategy of funneling pucks on goal and Minnesota wasn’t as diligent at getting sticks into shooting / passing lanes as Dubnyk found himself very busy.  The Sharks would strike first as Logan Couture banged home a rebound to make it 1-0.  Less than a minute later the Sharks would add to their lead as a long stretch pass found Joe Pavelski who had a step on the Wild defense and he’d skate in and beat Dubnyk with a quick wrist shot.  2-0 Sharks.  The Sharks also locked things down offensively as they were getting bodies and sticks into shooting lanes and Minnesota couldn’t generate any offensive pressure at all.  It was another snoozefest of a period, but this time the Wild seemed to be just going through the motions.  You could hear a collective groan from the home crowd as the period came to an end.

3rd Period Thoughts:  The Wild started off the 3rd period on the penalty kill and while they’d kill off the penalty, the Sharks scored seconds after it was over as Couture buried his 2nd goal of the game off a nice set up by Tomas Hertl.  3-0 Sharks.  Minnesota looked emotionally crushed by the early tally.  The Wild managed to create a few oh-so-close chances as Jared Spurgeon‘s shot just clipped the top of the crossbar and moments after that another Spurgeon shot rang off the post and out. Zach Parise’s rebound bid from in close somehow couldn’t get by Jones.  Minnesota stopped generating speed and beyond the occasional board battle, they were not winning many of the 50/50 pucks.  When the Wild did get someone open they couldn’t bury it.  The Sharks had more speed, more energy and seemed to expend little effort to thwart any Wild effort to try to cut into their lead.  The Wild appeared exasperated as they tried storm the Sharks crease in search of a goal but a miss by Mikko Koivu on a yawning net typified a frustrating evening.  The Wild would pull Dubnyk for an extra attacker and it was a total disaster as Granlund turned it over to Lukas Radil for an empty netter to seal a 4-0 Sharks victory.

Iowa is struggling as of late, having only 1 of their last 6 games.  One part has been an injury to team captain and top scorer Cal O’Reilly. Another part of that is a flagging offense and untimely penalties that has given their opponents too many opportunities.  Both of these trends would hold true on Sunday in their game against the Rampage.  Iowa looked like they might come back in the game, but a delay of game penalty on Kaapo Kahkonen for playing a puck outside of the trapezoid turned into a power play goal for San Antonio early in the 3rd period.  This would snowball into a few more goals in the 3rd period and Iowa would fall 5-2.  Gerald Mayhew and Matt Read with the goals for Iowa and Kahkonen had 25 saves in the loss.

C – Connor Dewar (Everett, WHL) ~ Everett has had a terrific season and a big reason is the strong play of its captain who had an assist and had 8 shots on goal in the Silvertips’ 6-1 win over arch-rival Seattle on Saturday night.  Dewar has 24 goals, 46 points, 37 PIM’s and is a +13 in 32 games.