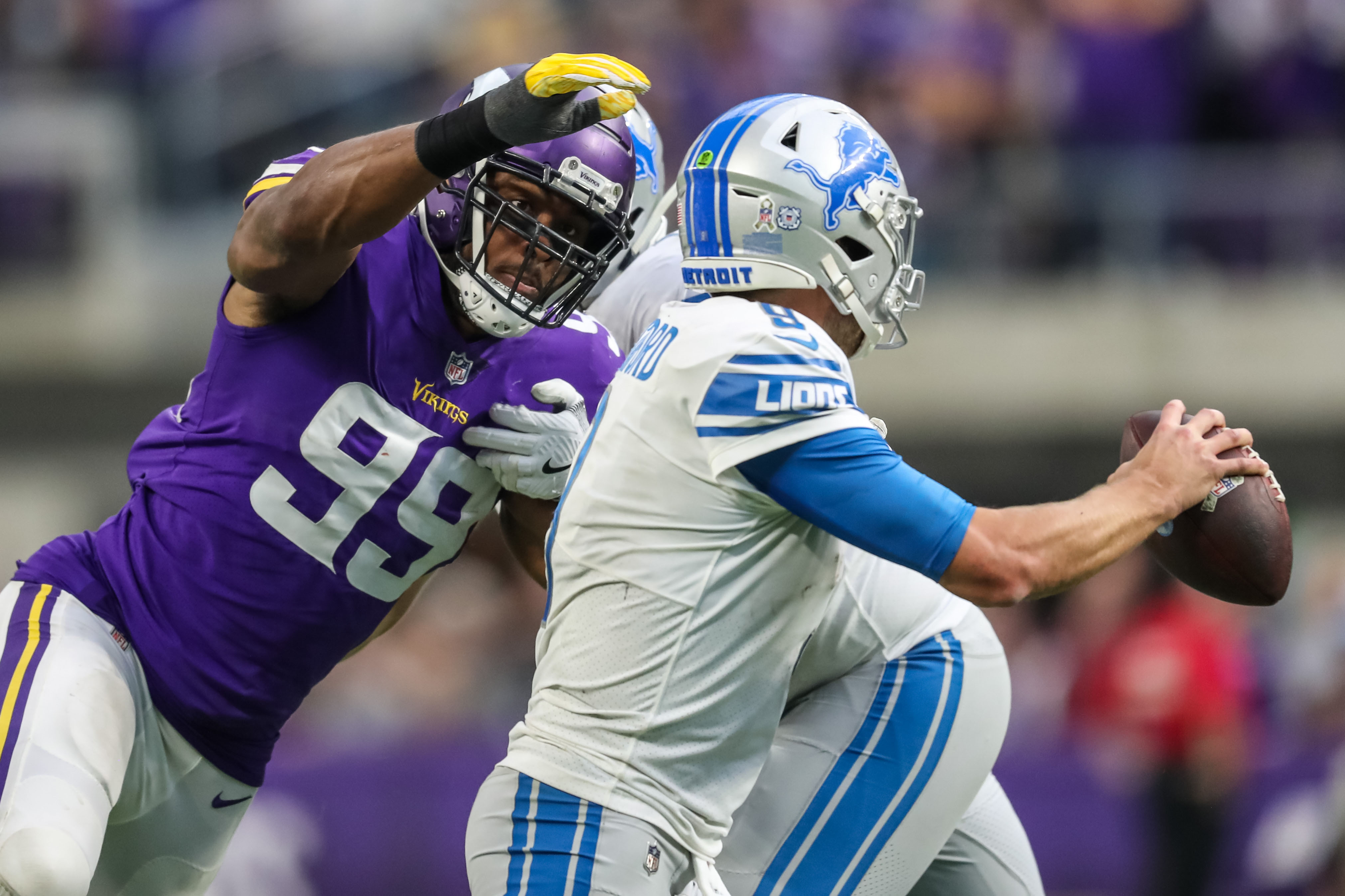 The Detroit Lions were officially eliminated from playoff contention after their 14-13 loss to the Buffalo Bills on Sunday. They are sitting at 5-9 on the year and are in last place in the NFC North. Another loss in their last two games would give them their first double-digit-loss season since 2012.

The Minnesota Vikings are 7-6-1 on the year and sit in second place in the NFC North, behind the Chicago Bears. They are in possession of the second Wild Card spot in the conference as well. A win on the road against Detroit would go a long way in them clinching a postseason berth as they have two 7-7 teams nipping at their heels. Both hail from the NFC East in the Philadelphia Eagles and Washington Redskins.

The last time these two teams met was back in November and the Vikings came away with a 24-9 win. They were led by a ferocious defense that racked up a franchise-record 10 sacks of quarterback Matthew Stafford. Coming into this contest, Minnesota leads the NFL with 47 sacks.

They are led by defensive end Danielle Hunter, who is second in the league with 14.5 sacks, trailing only defensive tackle Aaron Donald of the Los Angeles Rams with 16.5. Hunter, a 2015 third-round selection, was selected to his first Pro Bowl earlier this week.

This kind of defensive pressure has allowed the Vikings to be the fourth best team in the NFL in total defense as they are allowing only 314.3 yards per game.

As for the offensive side of the ball, these two teams have struggled more than expected coming into the year.

The Vikings are averaging 23.1 points per game and fired their offensive coordinator, John DeFilippo, a week and a half ago. They promoted QB coach Kevin Stefanski to interim OC and in his one game at the helm, they scored a season-high 41 points against the Miami Dolphins.

They are led by offseason acquisition Kirk Cousins at quarterback. On the year, he has thrown for 3,919 yards, 26 touchdowns and 10 interceptions.

He has multiple weapons at his disposal and his biggest one is wide receiver Adam Thielen. He is having a career-year and ranks in the top ten in the NFL in multiple categories. He is eighth in yards with 1,255 and seventh in touchdowns with nine. He is also second in the league in receptions with 105 and all of this led to him being named to his second Pro Bowl. Thielen is the first Minnesota receiver since Randy Moss to record back-to-back 1,000 yard seasons.

His receiving counterpart, Stefon Diggs, is having a pretty good year himself. He has 964 yards and should easily top the 1,000 yard threshold for the first time in his career. He is also second on the team in touchdowns with seven.

In the backfield, the Vikings have a dynamic duo. Latavius Murray leads the team in rushing with 538 yards and six touchdowns. Dalvin Cook, who has missed five games, is second on the team with 503 yards and has been good against Detroit in his short career. Last year, Cook ran for 66 yards on 13 carries before tearing his ACL versus the Lions. This year, he ran for 89 yards on only ten attempts against the team in Honolulu blue and silver.

As for the Lions, they are averaging 20.3 PPG, which ranks 25th in the league, and OC Jim Bob Cooter has come under fire in recent weeks. Stafford has regressed and is having perhaps his worst season of his career. He has passed for only 3,395 yards, 19 touchdowns and 11 interceptions. Stafford may struggle again in this one as he has been sacked 61 times in 17 career games against Minnesota.

Their backfield is in shambles with their leading rusher, Kerryon Johnson, out for the year after being placed on injured reserve earlier in the week. He finishes his rookie campaign with 641 rushing yards and three TDs. Johnson also caught 32 passes for 213 yards and a score.

Detroit will turn to a trio of backs in LeGarrette Blount, Theo Riddick and Zach Zenner to lead the backfield for the remainder of the season. On the season combined, those three have rushed for 650 yards and seven touchdowns.

As for the receiving corps, Stafford doesn’t have much to throw to. His only reliable target is second-year pro Kenny Golladay. He is leading the team with 1,005 yards and five touchdowns.

So the offensive struggles for the team in the Motor City could continue.

But now onto the prediction. I think this game will be close throughout but the Vikings defense will again be the difference in this one. I don’t believe they will get ten sacks like the last time these two teams met but they should be in the 4-6 range with Detroit having a banged up offensive line.

I also don’t believe the Lions will score only nine points in this contest, but I don’t think they will be much more successful at home than they were on the road. Minnesota will win this game and keep their playoff chances alive and maintain the lead for the last Wild Card spot heading into the last week of the regular season. Detroit will fall to 5-10 and may secure a spot in the top ten of the 2019 NFL Draft.