Your Morning Dump... Where we're about to find out what this team really is 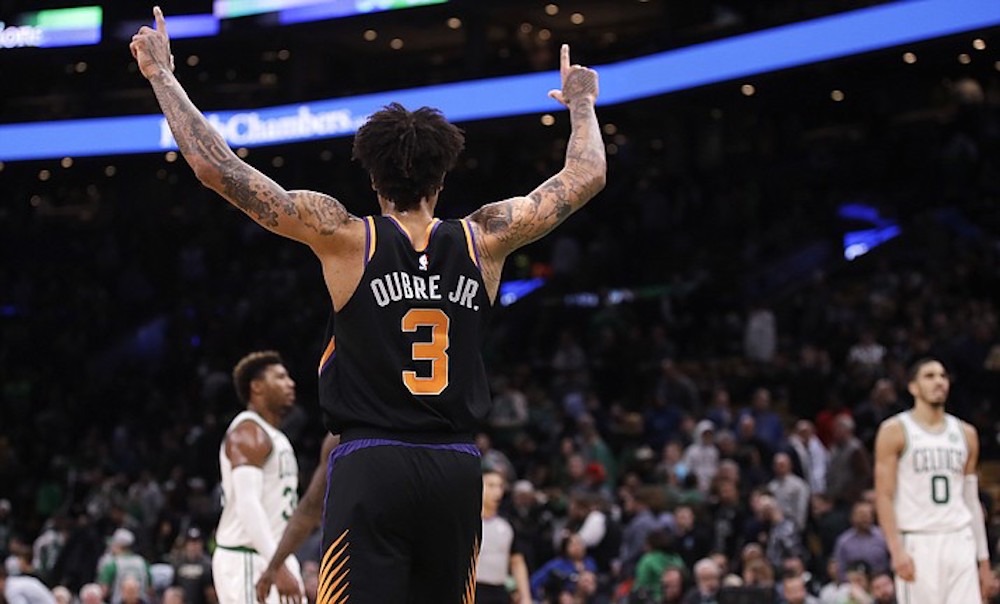 Your Morning Dump... Where we're about to find out what this team really is

While the Celtics easily played their best basketball of the season during that eight-game winning streak, their struggles against the Pistons and Suns call into question just how real that success actually was.

There’s little doubt Boston was playing significantly better than it was during its early struggles. That said, all eight victories came against teams that have losing records, and six of them came against teams ranked 25th or worse in the NBA in defensive rating. In fact, Boston’s last victory over a team with a record over .500 was over a month ago, when the Celtics beat the visiting Raptors in an overtime thriller on Nov. 16.

The upcoming schedule will provide a very different kind of test. And, to make matters worse, the Celtics might be forced to navigate it while also dealing with significant injury issues.

As the game shockingly slipped away against the cellar-dwelling Suns last night, I found myself hoping the Cs wouldn’t complete another frantic comeback against Phoenix. They should lose this game, I thought. Almost like the Knicks game last month where Brad Stevens said as much in his post-game remarks after his team tried to mount a similar late-game comeback.

The second half last night was so embarrassing, so putrid, so reminiscent of October and November, that the thought of putting lipstick on a pig with a last second win wouldn’t have been satisfying at all.

And so here we are again, after the Cs looked good against some truly bad teams. Teams that put up little resistance on the defensive end and demonstrated little effort as the Celtics started to hit shots. Give Phoenix credit, they don’t seem to be wired like that. And Detroit last Saturday, they were a desperate team that didn’t just roll over. Both teams, like Dallas last month just took to the game to the Celtics, and the Celtics honestly wanted no part of it.

There’s a small part of me thinking that maybe the Cs just need to see some really good teams, some rivals, walk in the door. Well, here’s our chance to see it. I don’t want to say the Celtics need to go 2-0 against Milwaukee and Philadelphia (and if they do, watch them lose to Charlotte on a sleepy Sunday night in between), but they better match the effort and intensity of both of those teams. If they don’t? I really think you’re going to see some cracks in the foundation of this team’s chemistry, cohesion and patience. If either, or both games get out of hand, how is Kyrie Irving the competitor going to react? If they do show up? Maybe they ride some momentum and confidence into January as they get guys like Al Horford and Aron Baynes back (hopefully).

The next week feels pretty pivotal. Let’s see which team shows up.

On page 2, last year’s playoff heroes are rarely showing up

The fact of the matter is that Irving needs more help more often. Jaylen Brown elevated back to a starting role but finished with just six points on 3-of-9 shooting over 23:34. Ultra-aggressive in the infancy of his return from a back bruise, Brown didn’t attempt a single free throw and grabbed only one rebound during his floor time.

Tatum put up 18 points but needed 17 shots. He added eight rebounds and four blocks and yet his second-half line was somewhat unremarkable. Both Tatum and backup point guard Terry Rozier were 2-of-7 shooting after halftime.

If the Celtics are going to suggest depth is the hallmark of this year’s team then they need to show it. Injuries created opportunities for players like Brown, Tatum, and Rozier to thrive last season but those players have rarely asserted themselves on nights the Celtics need someone other than Irving to save them.

Remember last year when the Hospital Celtics took the court? The team took pride in playing competitive basketball even when a number of guys went down. They found ways to rebound from the guard position even if they lacked obvious size.

Didn’t happen last night. And it was a great opportunity for the Terry Rozier’s, Jaylen Brown’s and Jayson Tatum’s of the world to really step up. As the game tightened and then slipped away in the second half, none of them really did.

Those three guys all became cult heroes at different points of last year’s playoff run. Tatum has been the steadiest of the three this year, but I personally have been waiting for another performance like he had in New York in the third game of the season. They could have used his shot-making late last night and he was barely noticed.

Aside from Terry’s two 3s, there’s not much to like right now. When’s the last time he finished at the rim like we were accustomed to seeing last year?

And I’m not sure what to say about Jaylen. The guy is in his own head, and I really think the Jackie Mac article, while a great read, was the worst thing that could have happened to him. It was a psycho-analysis of the kid posted to the world’s busiest sports website. He definitely read it, and it’s definitely still sitting with him. I, like many of you, still have faith in JB and know what he’s capable of, but he’s hurting this team right now.

Again, into town come the two teams the Celtics vanquished from last season’s playoffs. And they’re two teams that these three guys have all stepped up against in the last calendar year. I’m really hoping that the competition brings them back to life.

If your billionaire owner likes “Time Lord” it stays

Celtics owner Wyc Grousbeck joined Mike Gorman and Brian Scalabrine during the second quarter of Wednesday night’s game against the Suns, and he’s on board with “Time Lord.”

Score one for Weird Celtics Twitter. Unless we want to ask Bill Russell for his opinion, I think this one is officially settled.

Herald — Ryan McDonough looks back fondly on the Celts