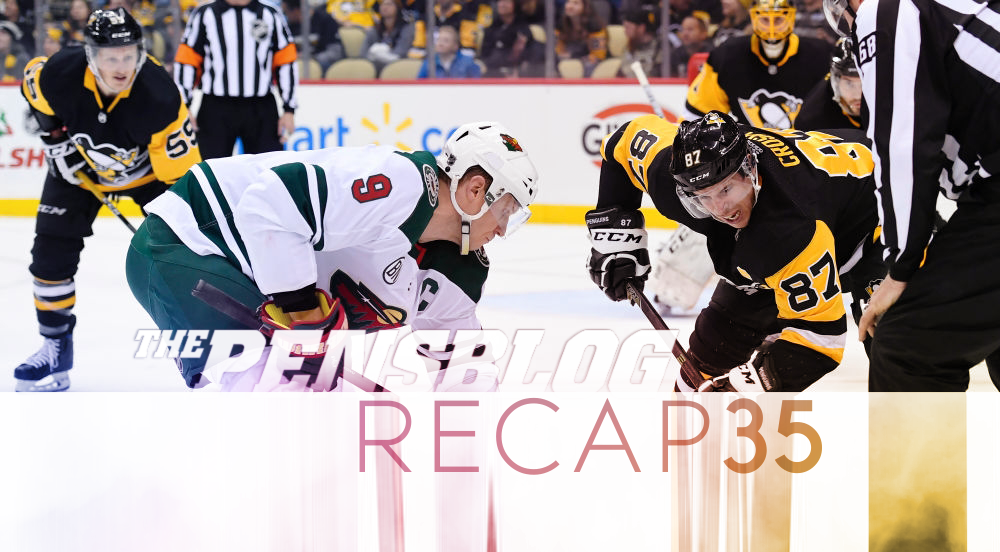 Rumors of the Penguins demise may have been greatly exaggerated, folks.

You can set your watch to this shit, too.  The new year starts approaching, gym membership contracts are being signed, “New Year, New Me” hashtags are picking up steam among the pumpkin spice latte crowd, and the Penguins get themselves into a playoff position.

And while it’s largely been Sidney Crosby that’s been the driving force, perhaps no one else has been more of a catalyst for this great run of play than Bryan Rust.

Also huge: The Penguins have gone 7-2-1 in their last 10, moving up to 3rd in the Metro on 40 points, while finally catching the Wild Card teams as well.  They’ve played one more game than the chasing Islanders and two more than the division-leading Capitals (43 points form 33 games), but the Islanders are actually bad and Washington is burning.

That’s a pretty significant change from even just two weeks ago when they were proclaimed dead and dusted.

See ya later, Jack Hughes.  We ain’t need ya.

With Dom Simon returning to the lineup following an 8-game stint on IR and Oleksiak exiting Wednesday’s win in Washington after getting KOed by Tommy Piss Drinker, Derek Grant got healthy scratch duties with Chad Ruhwedel.  Juuso Riikola returned to the fold alongside fellow countryman Olli Maatta as the lone change to the blue line.  DeSmith with the start opposite Devan Dubnyk on ugly sweater night at PPG.

shake it once- that's fine
shake it twice- that's okay
shake it three times- you're playing with yourself.

You could tell in the first few shifts that the Wild smelled blood against a team that played a hard-fought game the night before on the road because they came out flying higher than that time your friend slipped you Molly in your champagne on New Years.  The game settled down a bit with both teams trading off chances, but Minnesota would open the scoring through Jordan Greenway before the halfway point.

Right on the heels of what looked like Brassard and Hornqvist forcing a turnover in the offensive zone, they just couldn’t control the breakups, leading to Brodin gaining control of the freelancing puck and throwing a little dish pass to Future Penguins 3C Charlie Coyle on the zone exit.

As Coyle approached the Pens line, he sucked Maatta and Riikola in enough to free Greenway on the left wing.  Riikola’s timing was based on matching Coyle’s speed, so he was off a bit in trying to close down Greenway after the short pass while being subtly interfered with by Kunin driving the net.  A perfect storm that just opened up the time, space, and shooting lane for Greenway to grip and rip it.

Tough goal for DeSmith here.  Greenway put it on a postage stamp where the crossbar and post meet, but DeSmith is making himself small here and gives up the whole top of the net.  It’s…odd.  But in the end, it doesn’t even matter.

Just 56 seconds later, the Pens were afforded a chance to draw level after Granlund got called for a phantom tripping penalty, but they couldn’t do dick with it.

They did, however, get their shit together right after.

Despite a comedy of errors in the neutral zone where both teams couldn’t even pay to enter the zone, the Penguins got a little bit of luck courtesy of Devan Dubnyk when they did finally get the puck in the o-zone.

Rust and Crosby combined for a little zone exit, only for Rust to swing it in deep along the wall.  Dubnyk, who is a decent puck-handling goalie and was doing a great job on dump ins to this point, did the exact opposite of a great job on this particular dump in.  With Rust coming down the right wing wall, Dubnyk’s options included throwing it back up the way it came or trying to reverse it to his supporting d-man on the weak side.

Instead, the Wild players all got their wires crossed.  Spurgeon doesn’t commit to helping Dubnyk out because he reads Dubnyk moving it short to Suter, who is also expecting the short pass.  Dubnyk didn’t want to put Suter in that position with Rust charging in, so he tried to move it to the weak side to Spurgeon.  By Spurgeon reading it wrong and not dropping in behind Dubnyk, it gave Guentzel to space to jump into that empty area and take Dubnyk’s blind pass, feeding it out to Rust crashing the net for the tapperoo.  Give Rust goals in 4 straight and 7 in his last 6 here.

Somewhere in there late in the period, Simon almost made it a 2-1 game but was denied by the iron.  That’s some deflection, though.

All Pens to open up the second, holding Minnesota to 0 shots for the first 9 minutes of the period.  About 90 seconds after Minnesota finally got their first shot of the 2nd, the Pens had to go to the PK for the first time on the night when Malkin went off for knocking Coyle’s stick out of his hands.  After a flurry of good looks on the PP, the high octane play went straight to hell and the game became a fucking snoozefest.

Third period opened with Johnson and Zucker getting matching roughing minors 3:20 into it.  With 32 seconds left in the penalties, Brodin got rung up for hooking Guentzel to give the Pens an abbreviated 4v3 that turned into a 5v4 that turned into fuck all.

But again, out of nowhere, the Pens would score because the Wild are the worst part of an already terrible state.

If there’s one player that knows about turning the puck over and it ending up in the back of the net lately, it’s Jake Guentzel.  But give him credit, the kid made a cognizant effort all night not to turn the puck over around the blue lines while still working his nuts off and creating turnovers below the Minnesota goal line.

The second of such capitalizations and creations came when the Wild thought they stemmed the tide of the Pens’ 4th line, only for ZAR to jam it right back down their throats when they got it into the neutral zone.  Guentzel touched up on the delayed offside as Pateryn hopped off the bench to retrieve only to have Bake on top of him as he got to the puck.

Watch Guentzel bait Pateryn here.  Pateryn keeps looking over his shoulder to see where Jake is.  Guentzel stays on Pateryn’s left shoulder to simulate he’s going to body him into the corner.  Jake knows that Pateryn isn’t going to send the puck back up the wall from where it came as the Penguins are locking down that side of the ice. Pateryn’s safe play is to keep the puck’s momentum and send it to Brodin on the other side of the net.  Guentzel knows this and knows Pateryn can’t watch him the whole time and play the puck and as soon as Pateryn loses sight on Guentzel, he’s toast.  Guentzel gets on the other side of him, steals the pass and feeds Rust for the go-ahead goal.

With 3:37 left, Riikola got shipped to the box for slashing Greenway in front.  About a minute into it, BBQ Bruce got Dubnyk out of the net for the extra skater, but the PP would be negated with 23 seconds left in it for a too many men penalty to give the Pens a powerplay for the rest of the game.

when mom says you're all out of Häagen-Dazs pic.twitter.com/OhRb3mpfxt

Pens have one more game before the holiday break, traveling to North Carolina as the Canes play host.  Should be a fun one.  Go Pens.